Large, innovative developments will add more value to the original central business district and Lumpini Park area for the next few years

rising above: A visual projection of One Bangkok, set to offer a mix of residential, commercial and office properties at Rama IV and Witthayu roads.PHOTO: SUPPLIED

Large mixed-use developments now under construction or scheduled to start in the future are creating new buzz in Bangkok’s original central business district (CBD). When completed sometime between now and 2025, they will add even more value to already prime locations. The focus of all this activity is around Sathon and Silom roads, and Lumpini Park.

Sathon and Silom: The first modern CBD in Bangkok, Silom and Sathon rose to prominence in the boom years of the late 1980s and early 1990s. Today the area is home to around 1.7 million square metres of office space housing many prominent local and multinational companies, especially in the field of finance.

The Sathon-Silom area boasts easy access to both the BTS and MRT rail lines, and is just minutes away by train from the prime shopping areas near Siam station. It is also close to topflight private and public hospitals, as well as after-work hangouts. Residential properties in the area attract both Thais and expatriates — mainly westerners with some Chinese, Koreans and Japanese. Although many Japanese restaurants and entertainment places are located in Soi Thaniya at Sala Daeng BTS station, not as many Japanese live in this area compared to the Sukhumvit area.

Many luxury condominium projects in the area have an average selling price similar to the area around Lumpini Park, at around 230,000 baht per square metre. The prices drop to 150,000 baht per sq m or lower for condos located in small sois or farther away from a main road or BTS station. Many supermarkets, convenience stores and fresh markets in the area provide all the daily necessities residents could want. Thus, condominiums in this area are popular and have high take-up rate.

Some new projects launched at 260,000 baht per sq m were sold out in only a few days, reflecting pent-up demand as new developments have been scarce over the past three years. Clearly, projects with good CBD locations and close to a BTS station are still very popular.

put to use: Langsuan Village is being developed by Siam Sindhorn, a subsidiary of the Crown Property Bureau, at a cost of 26 billion baht. The plot will feature serviced apartments, office buildings, hotels and other residential components.PHOTO: COURTESY OF CPB

Big changes are under way on lower Sathon Road, where the residential developer Supalai Plc has acquired the seven-rai former site of the Australian embassy for a price estimated at 1.4 million baht per square wah. The plot is to be developed into a large-scale, mixed-use project with a total project value of around 1.8 billion baht.

In addition, two other large mixed-use projects are taking shape around Sala Daeng BTS station. Minor Group, the country’s largest hotel and restaurant group, has formed a joint venture with the property developer Nye Estate to develop the site at the junction of Silom Road and Soi Convent. The local luxury hotel pioneer Dusit Thani, meanwhile, has formed a joint venture with Central Group to develop a new hotel and commercial project to replace the existing Dusit Thani Hotel that will be demolished next year. These developments are among the most significant on Silom and Sathon roads over the past 25 years.

Around Lumpini Park: This area includes Lang Suan, Sarasin, Ratchadamri, Phloen Chit and Witthayu roads, and is home to numerous Grade A office buildings and embassies — among them those of the United States, the United Kingdom, Japan and Australia.

Many westerners prefer to live in this area because it is very peaceful, with a profusion of mature trees providing more shade than in many other parts of the inner city, while transport is still very convenient with BTS and MRT stations not faraway. Moreover, it is close to many shopping malls such as Central Embassy, Central Chidlom, CentralWorld, Siam Paragon and all the other malls in the Siam area. Another important factor is Lumpini Park, the main public park in the heart of Bangkok covering 360 rai or 57.6 hectares.

The proximity to a huge park is one reason why land prices in this area are extremely high. A recent transaction involving SC Asset Plc, at 3.1 million baht per square wah, was a record high for Bangkok. The starting prices of new condominium units in the area are also high, from 250,000 baht per sq m and up. At 98 Wireless by Sansiri Plc, units start from 550,000 baht per sq m — the highest selling prices in the country.

With many high-end condominium projects, some freehold and others on 30-year leasehold contracts, rental rates of condominium units and serviced apartments in the area are also very high, starting from 30,000 baht per month for a modest one-bedroom unit.

Two other large-scale projects under construction are located in the Lumpini area. The first is One Bangkok by TCC Assets (Thailand) Co Ltd and Frasers Centrepoint Ltd. Occupying 104 rai, it is expected to cost US$3.5 billion to develop and all phases are to be completed in 2025. all over the place: Supalai will develop the former Australian Embassy site on Sathon Road.PHOTO: Somchai Poomlard 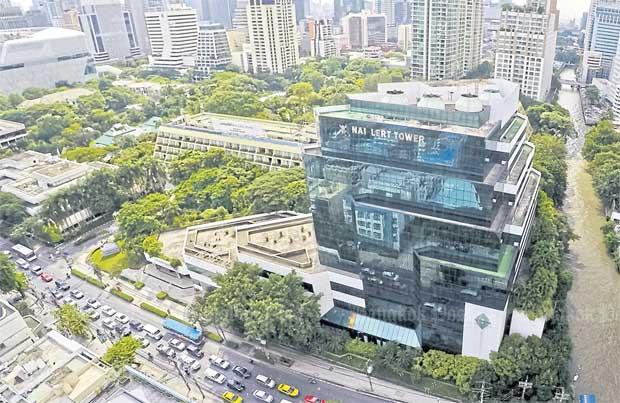 The second project is Langsuan Village which is being developed by Siam Sindhorn, a subsidiary of the Crown Property Bureau (CPB). With a total land area of 52 rai and a total investment value of 26 billion baht, the plot will feature serviced apartments, office buildings, hotels and other residential components. These two projects are being developed on CPB land plots.

Surachet Kongcheep is a veteran local property market expert.
He can be reached at surachet.jock@gmail.com