The elite membership company is breathing freely for the first time after being cut out of political shackles, writes Suchat Sritama

Thailand Privilege Card Co (TPC), the operator of Thailand Elite Card, is betting it can make a profit for the first time in the next four years after being freed from political intervention.

The state-owned company is incubating a number of businesses and drawing up strategic plans that refocus its sales and marketing globally.

TPC was born in July 2003, during Thaksin Shinawatra's administration, with the aim of offering the country's finest vacation and business experiences through the world's first elite membership programme.

The company was unstable during its first 12 years of operation, often being used as a political pawn. A number of its top managers were associated with inappropriate behaviour, including corruption, but TPC says the firm is ready to reinvent itself and move forward. 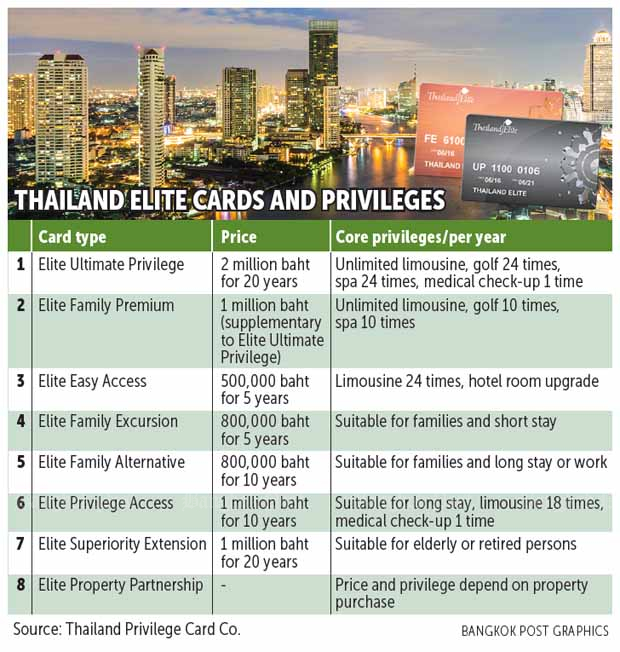 Pruet Boobphakam, president of TPC, says the company's operations and finances are now stable. There have been no political interventions since he assumed his position several years ago.

If all new businesses perform as expected, the company will make a profit within the next four years. The company earned 800 million baht last year, but lost a larger amount. The firm's 1.12-billion-baht cash flow is "more than enough" to cover its marketing and operations.

"The fact that politicians are no longer intervening in our operations is one of the major factors that will allow us to make a profit. The company has created more products and privileges, as well as channelled more money and personnel into marketing," Mr Pruet says.

The company and its management were dominated by a single political party during its first 12-13 years.

The company drew heavy criticism because it enabled foreigners to take over national assets and properties.

The members collectively spend 45 billion baht in Thailand each year, mainly in luxury products such as properties and yachts.

"Some members bought a 50-million-baht property in Phuket. Some purchased a yacht valued at 400 million baht," Mr Pruet says.

The company's operating income stands at 600 million baht as of November 2018, which compares favourably with its 800-million-baht yearly target.

From November 2017 to February 2018, the company recorded more than 204 million baht in revenue, 23% higher than the 166-million-baht target. Turnover was up 16% from 125 million baht from the previous period.

Mr Pruet says that Thailand has become a home for the wealthy from all over the world, many from emerging markets like Bangladesh and India.

The company also aims to promote Thailand as a top global destination, especially for high-end guests, he added.

Mr Pruet says the company is working with 24 global marketing agencies, with France-based IBC Aviation its most recently appointed one.

IBC Aviation is in charge of promoting the Thailand Elite Card in countries like Luxembourg, Belgium, Morocco and South Africa.

Next month, the company will host a business road show in Japan. Japan is already one of the company's largest markets, but the executive says there is still a copse of untapped consumers there.

TPC signed an agreement with Japan's Long Stay Foundation to boost the number of Japanese senior citizens and retirees in Thailand.

Thailand is the only country to grant both visa and general privileges to cardholders, according to Mr Pruet. Some other countries in the Caribbean have put similar schemes in place, but they only offer residency, not other privileges.

In the last few years, the company has implemented a number of strategies, including doubling its sales representatives and increasing its roadshows across many countries, which was reflected in improved revenue in the first quarter of the fiscal year (October-December, 2017).

The perception of Thailand as a hub of transport in the region, as well as for culture, food, adventurous activities and lifestyle facilities have also driven the card company's revenue.

"Thailand's tourism industry, from seaside resorts to green and peaceful mountains, is better than that of neighbouring countries. The country's growing number of visitors are proof of the strength of the tourism sector," he says.

Thailand's reputation will continue to draw more members into the company, and more money into the economy, says Mr Pruet.

The top three markets for TPC are China (18%), UK (13%) and US (10%). Other major markets are France, Japan, Australia, Bangladesh, Russia, the Netherlands, Switzerland and India.

"The company plans to create an outstanding visa privileges program by focusing on three core pillars: simply extraordinary, residency programs and friends of Thailand," he says.

Through its residency program, it will offer a long-stay visa options that go from 180 days to 20 years. The new "residency visa" will assure that members are confident they can enjoy the card's privileges for the duration of the membership.

Friends of Thailand aims to make Thailand Elite Card members feel like "close friends" and "family" of the company, rather than as normal visitors.

While the company is focusing on strategic changes, it is still promoting its existing cards, with the exception of the 2-million baht 20-year Elite Ultimate Privilege visa. Current members, however, will still be able to enjoy all the benefits of the subscription, which include unlimited limousine services, a yearly medical check-up, and access to spas and golf courses 24 times a year.

The seven cards in the market include the Elite Family Premium (a 1-million-baht supplement to the Elite Ultimate Privilege), which includes unlimited limousine service, and access to spas and golf services 10 times a year. Its five-year Elite Easy Access retails for 500,000 baht and allows customers to use its limousine service 24 times, and hotel room upgrades. It also offers the five-year Elite Family Excursion for 800,000 baht, for family and short stays.

The 10-year Elite Family Alternative (800,000 baht), suited for families and long stays is another option. The 10-year Elite Privilege Access (1 million baht) is meant for longer stays and includes limousine services 18 times a year, and a yearly medical check-up.

The 20-year Elite Superiority Extension is suited for senior or retired people.

The price of the Elite Property Partnership will depend on the property purchasing deal.

"The seven cards categories start at 500,000 baht and offer various price points and privileges, covering every target group: wealthy foreigners, those with family residing in Thailand, and foreign investors looking to invest in property in the country through "Investment Immigration," he says.

TPC, which is 100%-owned by the Tourism Authority of Thailand (TAT), aims to promote tourism in Thailand and boost the number of high-end visitors to generate revenue for rural communities.

This year, TPC is promoting 55 secondary provinces to its membership. For years, most TPC members have only visited major cities like Bangkok, Chiang Mai, Phuket, Pattaya and Hua Hin.

TAT and TPC will collaborate to promote new destinations in secondary provinces to help channel income into local communities. TPC will continue to focus on expanding its membership among the investment community, as well as among business owners and retired foreigners.

TPC is working with about 70 providers of golf, spa, and limousine services. The company is considering increasing its vendors with demand. However, TPC may revise some unlimited services like limousine and spa because they may become a "huge cost" moving forward.

Mr Pruet says the company has spent a substantial part of its budget to improve its IT system and internal equipment in order to enhance management and operation.

The company grew 64% year-on-year in 2017, and increased its bottom line by 93% from 2016, after launching four new member cards, increasing its distribution channels, and allowing global dealers to appoint new marketing representatives.

Under its 2018 vision entitled "Simply Extraordinary Country Residency program Crafted for Friends of Thailand", TPC plans to include wealth management in its memberships.

The products will be crafted to meet residency requirements.

The company has increased the salary of its 140 staff by 7.5%, and paid an annual bonus.

"This is our new task. The first leg already took place at Munnai island," he says.