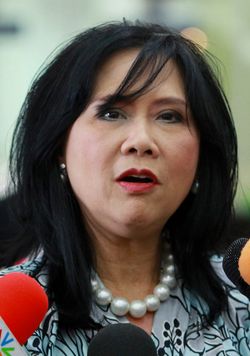 The company also asked the court to order NBTC to return to it 16 Bangkok Bank guarantee documents, 365.5 million baht in licence fees it had already paid plus 7.5% interest from the date the lawsuit was filed.

The court ruled NBTC had failed to keep its promise detailed in the prospectus and Thai TV had the right to cancel the contract.

But since the contract cancellation date came after the due date for the second licence-fee instalment, Thai TV was required to pay the second instalment of 258 million baht, the court said.

As for the bank guarantees for the payment of the third instalment onward, the NBTC must return them to the company, or repay it in cash.

However, the court did not order the NBTC to pay damages to the company, reasoning losses were normal business operations.

Ms Pantipa told Manager Online after the ruling that while she was satisfied with the decision, she would appeal for the damages. She was convinced she had evidence showing the damages caused to her company were the result of NBTC’s failure to comply with the prospectus.

“I believe I’m not incompetent, weak or lack financial means but what NBTC has done did not accommodate [the business]. It even obstructed the operation and caused damages to us.

“Throughout 40 years I was in business, I never suffered losses, not a single baht. Why did I suddenly become so stupid and weak that I failed to see what lay ahead? This case affects my reputation.

“This fight is not for me but for the people. Other channels are also suffering. Some [owners] are on the verge of committing suicide after their families fell apart. This is NBTC’s doing and it’s a grave sin,” she said.

Sombat Leelapata, director of NBTC’s legal office, said the regulator would appeal the ruling in 30 days.

“The court did not take into consideration certain facts such as the details in the prospectus on the annual rate of network expansion. Besides, Thai TV claimed that the Public Relations Department’s network had problems when in fact it used the network of another operator.”

Thai TV won a news channel for 1.3 billion baht and a variety and children channel for 648 million.

A year after the auction, several operators suffered huge losses, mainly due to high licence fees and a sea change in the TV landscape driven by the proliferation of social media and streaming services.

Some, including Thai TV, blamed it on NBTC, which they said have failed to expand viewership and multiplex stations (MUX) nationwide as planned.

Only a handful of the operators showed profits, most notably Workpoint and Mono channels.