Media industry spending is expected to rebound this year, based on the growing online and out-of-home media outlet segments, as well as a positive outlook for Thailand's economy, says researcher Media Intelligence (MI). 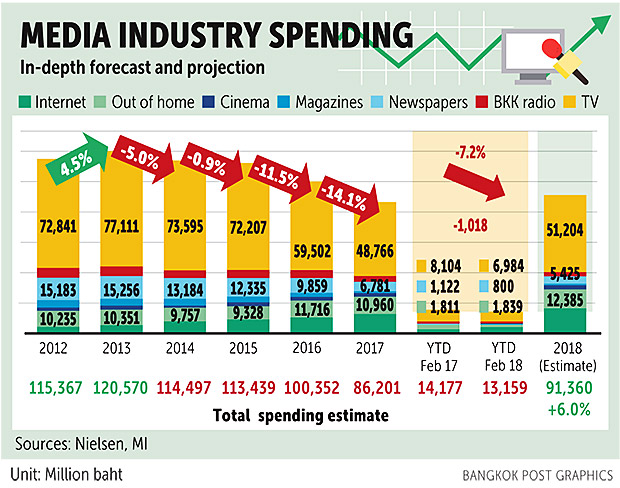 Media director Pawat Ruangdejworachai forecasts total media spending of 91 billion baht, an increase of 6% from last year, which was considered the worst level the industry has seen since 2010.

He said that with the estimated hike this year, the industry could expect a relatively brighter future, though the revenue projection remains low.

Media spending would need to increase by at least 10% to make up for massive losses over the past two years, Mr Pawat said.

He said there are many events planned for the summer and long holidays like Songkran that should result in positive advertising spending.

Media spending over the past two months has contracted 7%, Mr Pawat said, adding that there should be greater movement from the middle of this month until May.

"Many brands and advertisers, especially fast-moving consumer goods companies, have trimmed back media budgets because of the sluggish economy but are putting efforts into boosting sales through online campaigns and in-store media," he said.

"TV media is still powerful in terms of engagement with mass audiences," Mr Pawat said. "Some channels are designed for everyone, and others for urban people."

But for online media, MI reported that spending has increased from 9% to 14%, albeit still a small proportion when compared with TV.

Out-of-home media outlets (transit, in-store and outdoor) also saw spending jump to 9.5% of the industry total last year from 7.7% in 2016.