Mr Norling will leave the company after three years at the helm.

The upcoming resignation of Lars Norling, chief executive of Total Access Communication Plc (DTAC), may further drag down the company's already tarnished reputation, as the country's third-largest mobile operator has downsized its organisational management structure in an effort to keep its operational costs as low as possible.

The move will also pressure the telecom regulator to question whether DTAC will in fact bid for the 1800-megahertz spectrum licence this year.

According to telecom veterans, Mr Norling decided to leave DTAC for a new opportunity in Sweden. He will remain in his current role until Sept 1, 2018, or until a successor is named.

His resignation raised doubts among industry observers. Mr Norling works under a three-year contract that would have ended in April, but the company has the option to extend his employment on a yearly basis.

"It is interesting that a chief executive who was not sacked decided to move to an outside job, rather than return to the company's headquarters in Norway," said an industry source.

The source said DTAC has been downsizing its organisational structure for years along with the transformation to a digital service provider. Several executives moved or resigned without any recruitment, exemplified particularly in the case of chief marketing officer Sittichoke Nopchinabutr, whose resignation was effective on March 1.

DTAC has terminated its distribution of SIM sales in provincial markets nationwide by selling directly to retail shops.

DTAC's position as second in the mobile market was overtaken by True Move last year.

The source said DTAC's business direction was fully controlled by its parent, Telenor, which is a totally different model to its two rivals, Advanced Info Service (AIS) and True Move, which operate in a local ecosystem.

Telenor seems to be focused on making returns from regional subsidiaries for the benefit of its shareholders rather than fostering ambitions to be the market leader, the source said.

But DTAC has the right to use only 50MHz bandwidth on the 1800MHz spectrum, as the concession states DTAC must use full capacity of the first 25MHz bandwidth before using the rest of the bandwidth of the spectrum.

DTAC also holds 30MHz of bandwidth on the 2100MHz spectrum under the licence system.

DTAC failed to win a 4G licence of the 1800- and 900MHz spectrum auctions in 2015, while both AIS and True Move secured licences.

However, DTAC through DTAC TriNet won a partnership deal with TOT to provide 4G LTE service via 60MHz of bandwidth on TOT's 2300MHz spectrum. 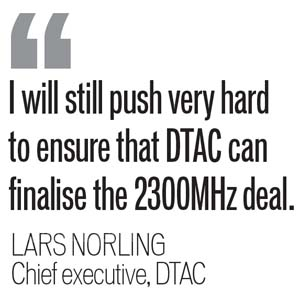 The deal was approved by the National Broadcasting and Telecommunications Commission (NBTC) late last year.

The deal is pending approval from the Office of the Attorney General (OAG).

A CIMB analyst said that after expiry of the 1800- and 850MHz concession, DTAC will hold only 30MHz of bandwidth on the 2100MHz spectrum under the licence system, which is insufficient to handle 22.7 million subscribers at present.

"DTAC must take the 1800MHz licence from the planned auction and another 60MHz of bandwidth on TOT's 2300MHz, but nothing is clear yet," the analyst said.

The existing NBTC acting board cannot hold the auction.

The analyst said DTAC needs to seal the 2300MHz deal with TOT before the auction of the 1800MHz spectrum takes place because the deal is beneficial to DTAC, with more bandwidth at lower cost.

However, AIS and True Move need the auction of 1800MHz licences to be held before the 2300MHz deal is approved because they want DTAC to shoulder part of the financial burden, similar to when the two companies won the 1800MHz licences in 2015 at very high winning prices.

The analyst said it is hard predict which deal will take place first. Moreover, the transition within DTAC's top management will inevitably create pressure on the new NBTC to hold the auction in a timely manner.

"If the auction and the 2300MHz deal drag DTAC to an inferior position, the company is likely to avoid bidding entirely," the analyst said.

Mr Norling said: "I will still push very hard to ensure that DTAC can finalise the 2300MHz deal with TOT Plc as soon as possible."

The executive said he decided to pursue a job opportunity with an investment firm in Sweden.

Mr Norling has worked for Telenor group for almost 20 years, three of them at DTAC. He acknowledged that the planned 1800MHz spectrum auction may be delayed. 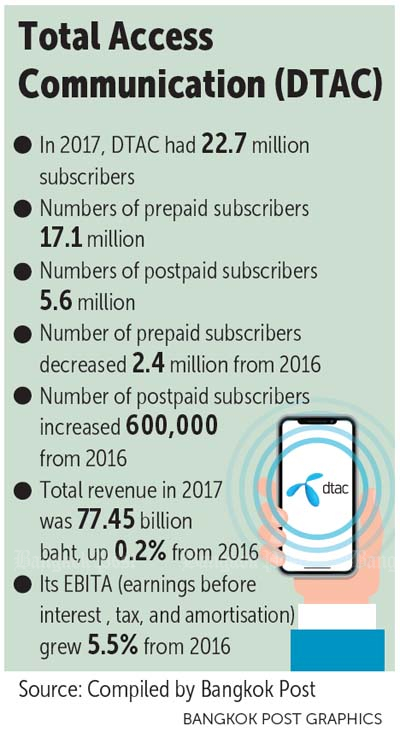 Even if this is the case, however, DTAC will provide uninterrupted network services to customers after the end of concession, according to an NBTC notification on the Temporary Subscriber Protection regulations in regard to the expiration of licences, concessions or mobile service agreements, he said.

When asked whether DTAC forced him to resign after the operator fell from second to third place under his leadership, Mr Norling said the firm's business performance in the fourth quarter of 2017 showed that the company stabilised its revenue from last year and grew at an "impressive" clip in the postpaid business.

"We'll continue to invest heavily in our network to accommodate robust data growth, as well as work to offer the best value to customers and to become the digital leader in the market," he said. "We expect the adoption of digital services and channels to grow rapidly."

Mr Norling said he is paving the way for a smooth transition to his successor, who will continue "DTAC's mission of digital transformation and business acceleration".

FSS expects DTAC's net profit to decline by 28% this year to 1.4 billion baht.