Tourists are hitting up supermarkets like Big C by the busload

Love it or hate it, Chinese visitors are driving Thailand's tourism sector, which accounts for about a fifth of the economy. 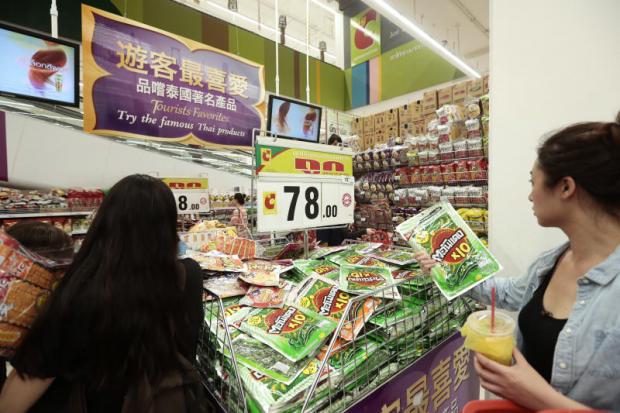 Arrivals from China surged to a record 1.2 million in February. Their numbers are expected to top more than 10 million this year out of 38 million international tourists overall.

Chinese tourists come to Thailand for a number of reasons, such as health checkups, buying condos and shopping.

According to market researcher Nielsen, Thailand is the country where Chinese tourists spend the most money during overseas travel, with daily per-person spending of up to 7,023 baht.

"Thailand is my second home," Li Jian, a Chinese shopper from Beijing, said as she perused Big C Ratchadamri. "It is not only beautiful, but also has delicious food. I love to buy Kunna brand processed durian because it tastes and smells fresh. Apart from processed durian, I also have a long list of items to buy."

Ms Li is testament to how Thai consumer goods makers have captured the business opportunity created by Chinese tourists.

Several consumer product companies have been trying to sell their products to Chinese tourists in order to offset shrinking domestic sales of fast-moving consumer goods in the light of the recent economic downturn, which has witnessed high household debt and weakened consumer confidence in the past few years.

"Some 50% of our sales growth last year was driven by foreign tourists, particularly from China," said Ittipat Peeradechapan, chief executive of Taokaenoi Food and Marketing Plc, the maker of Tao Kae Noi seaweed snacks and a pioneer in breaking through to Chinese customers.

According to Mr Ittipat, the first Tao Kae Noi Land Plus store will occupy 250 square metres near a skytrain station. The store is expected to be worth 5-10 million baht and is scheduled to open in the fourth quarter of this year.

The store will be a prototype to test market response before branching out to other potential locations.

Tao Kae Noi Land Plus will sell both food and non-food items such as health and cosmetics products, with food making up 60% of the total.

"We want to develop Tao Kae Noi Land Plus stores to become a shopping destination for souvenirs and miscellaneous products, similar to Don Quijote, which is a must-visit spot for tourists in Japan," Mr Ittipat said.

Don Quijote has a diverse product line-up and late-night services, and is known for offering the ultimate consumer experience.

A longtime favourite of Thai tourists who like to shop, the chain is known for its huge range of products -- from basic electronics and clothing to all sorts of quirky and occasionally lewd Japanese accessories -- as well as its pounding in-store soundtrack.

The company also plans to open seven Tao Kae Noi Land shops in tourist destinations across the country this year, bringing the total to 20. 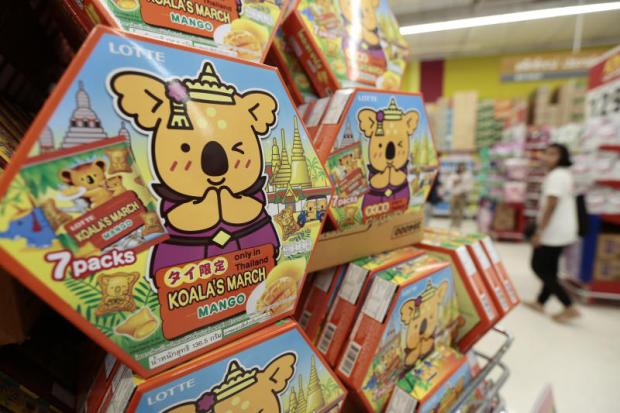 "Thanks to the influx of Chinese tourists to Thailand, Mistine became popular very rapidly in China," Mr Padungsak said.

"Believe it or not, Mistine sales ranked among the top 10 best-selling brands, alongside famous international brands like Bobbi Brown, Dior and Maybelline, during the Nov 11 single-day sale on the T Mall website," Mr Padungsak said.

Sales from the Chinese market contributed to 26% of Mistine's sales in 2015, with the proportion jumping to 56% in 2016. Sales may reach 80% after joint venture operations in China are up and running.

Kunna Groceries Co, the maker of processed fruits, is another firm that has jumped on the bandwagon to tap Chinese tourists after studying the business opportunity for a year.

Sales of Kunna processed fruits rank in the top three best-selling items at the Thai souvenir booths of Siam Paragon and in the top 10 at Tops Supermarket CentralWorld, with durian a must-have item that Chinese tourists take home.

According to Nasha Jungkankul, the founder of Kanna Groceries, since the company began focusing on foreign tourists, particularly Chinese, foreign customers now contribute up to 80% of Kanna's sales.

Apart from Paragon and Tops, the company has opened its own shops at Meya complex in Chiang Mai and Central Marina Pattaya and recently at Asiatique The Riverfront and Terminal 21 Pattaya.

"Our business grows every year by word-of-mouth," Ms Nasha said. "We are still alive, while hundreds of brands have died over the past 5-6 years."

Chairat Petchdakul, vice-president for supermarket merchandising at The Mall Group, said that with the growing number of Chinese tourists at Paragon, the company has a large space at the Gourmet Thai souvenir zone, increasing the area to 700 sq m from 300 sq m.

With this expansion, sales of Thai Gourmet souvenirs rose by 20% last year.

The company also plans to adjust the layout of stores that see foreign tourists, such as EmQuartier, to become more attractive to Chinese tourists in the second quarter of this year. More services will be added, including home delivery.

"The feedback from Chinese tourists is better than we expected," Mr Chairat said. "Our Thai Gourmet sales jumped to about 500 million baht last year, from 10 million baht in 2016."

Apart from Paragon, many retailers such as Tops Supermarket and Big C Supercenter have cornered the market for popular Thai products to lure foreign tourists, especially Chinese. 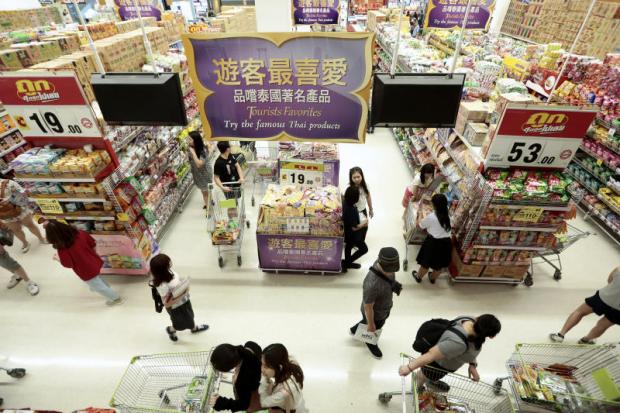 "Sales from foreign tourists are very strong, with 35% growth in 2016 and 25% in 2017," Ms Rakthaya said. "With better-than-expected response, we will enlarge our Thai Signature zone to an additional 12 Big C branches this year in Phuket, Pattaya, Chiang Mai and Bangkok."

Big C Ratchadamri welcomes foreign tourists, particularly Chinese customers. During peak season, 60 buses of Chinese are brought in per day, with the rate falling to 30-40 buses a day in off-peak times.

The company works with companies, including small and medium-sized enterprises, to produce exclusive products for Big C such as Glico Banana Choco, a popular snack among Chinese visitors.

"Chinese tourists have relatively high spending power, with an average of 5,000 baht per family per transaction," Ms Rakthaya said.

Somwalee Limrachtamorn, managing director of Nielsen Thailand, said capturing the hearts and wallets of Chinese tourists means understanding their specific wants and needs, their lifestyle, their behaviour during travel (identifying the path to purchase) and how to appeal to them.

"The Chinese tourists come from a variety of age groups and regions, so they might go after different products and services in Thailand," Ms Somwalee said. "Even though we can see the growing trend in the health, lifestyle and beauty sector from Chinese consumers, it's very crucial for brands to make sure that they're not generalising and applying a one-size-fits-all approach to Chinese tourists.

"On top of that, leveraging online platforms and consumer data to enable precision marketing will be key for manufacturers looking to capture the needs of Chinese consumers. As we know, travellers normally rely heavily on the internet for information and media. Brands must consider how to become sought after by Chinese tourists. One way is to generate awareness at the source and increase the visibility and availability of your brand for Chinese tourists once they've arrived in Thailand."