The telecom regulator has reaffirmed that its assistance to Advanced Info Service (AIS) and True Move will generate 3.6 billion baht for the state during 2020-24 based on a 1.5% interest rate, with the hope that the two operators will join the planned auction of the 1800-megahertz spectrum. 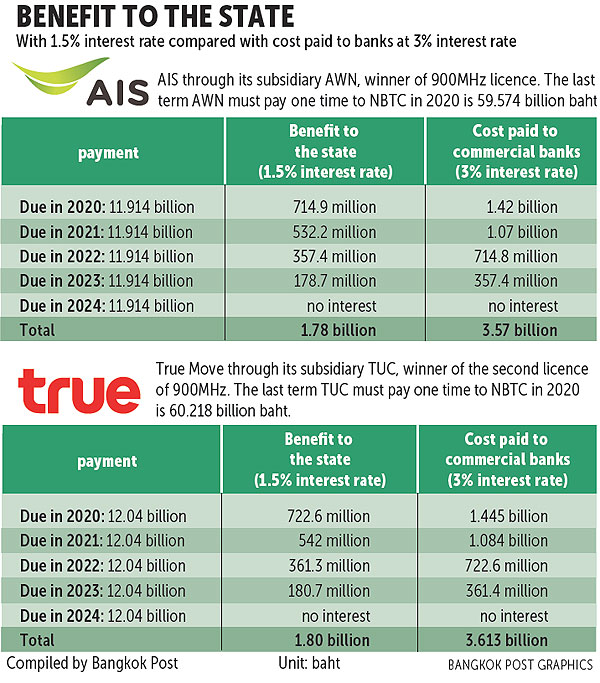 The two auction winners will benefit from capital savings of 3.59 billion baht based on a 3% interest rate if they borrowed from banks.

"The amount of money is not as large as claimed by the Thailand Development Research Institute (TDRI)," said Takorn Tantasith, secretary-general of National Broadcasting and Telecommunications Commission (NBTC).

After presenting the debt payment proposal to a meeting of the National Council for Peace and Order (NCPO) on March 27, the NBTC was assigned by the NCPO to create more public awareness to defend claims from the TDRI that digital TV operators, and specifically the two winners of the 900MHz licences, did not deserve assistance under Section 44.

The government plans to invoke Section 44 to issue assistance to ease the financial burdens of the two companies.

The NCPO recently delayed the process of invoking Section 44, however, after the plan met criticism.

Mr Takorn said the NBTC insists that the information released by TDRI chairman Somkiat Tungkitvanich was too extreme and did not consider direct and indirect factors in the ecosystem.

By the end of last year, AIS and True Move jointly asked the government to invoke Section 44 to extend the terms of their licence payments in 2020 for the last 60-billion-baht payment that each company has to pay.

AIS and True Move each must pay the third term of licence payments at 4.02 billion baht in 2018.

AIS and True Move made the proposal to the NCPO in December.

The NCPO asked the NBTC for input, and the commission supported the two companies' requirements by extending the 2020 payment by five years.

Mr Somkiat previously posted a note on his Facebook page opposing the move, saying that the winning bids for the 900MHz spectrum licences was caused by JAS Mobile Broadband's inflated bidding, yet AIS and True Move decided to bid for the licences anyway.

Assistance for AIS and True Move will inevitably ease the two companies's burden at the state's expense, he said.

AIS and True Move have to pay 1.78 billion and 1.8 billion baht, respectively, on the basis of a 1.5% interest rate for the five years of the term extension.

If the two companies borrowed money from commercial banks, the standard interest rate of 3% would create a higher cost of capital.

The NBTC has expressed concerns that unless assistance is given to the two licence holders, the 1800MHz licence auctions scheduled for later this year will be unsuccessful.