Car purchases, especially at exhibitions like the Bangkok International Motor Show 2018 (above) are a key factor behind rising household debt. (Photo by Patipat Janthong)

Siam Commercial Bank (SCB)'s research house, the Economic Intelligence Center (EIC), has raised a warning flag about a potential re-acceleration in household debt after the household debt-to-GDP ratio at the end of 2017 edged up for the first time in two years.

But higher household debt at present should not be worrisome as consumer loan growth is largely driven by auto loans and mortgage borrowing by mid- to upper-income segments, where purchasing power remains healthy, he said.

The research unit's comments came after the family debt-to-GDP ratio was found to have risen to 77.5% at the end of December from 77.3% in the preceding three months.

That was attributed to auto-loan growth, in line with the car sales uptick.

Household debt surged by 494 billion to 12 trillion baht at the end of last year, from 11.5 trillion a year ago.

"The passive deleveraging of household debt since 2016 opened people up to new loans. But banks need to monitor the situation amid the still-weak purchasing power of lower-income earners," he said. 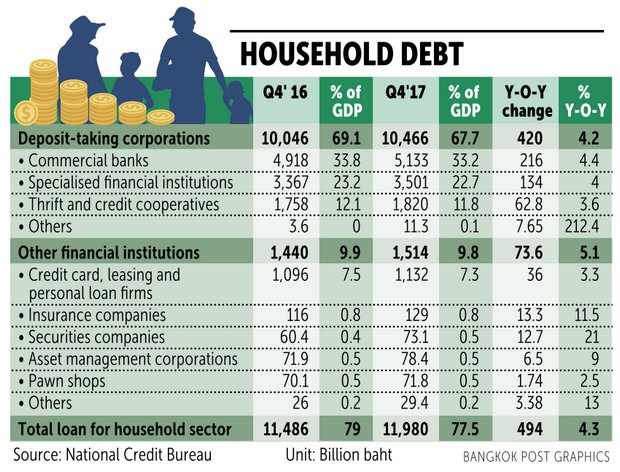 The household debt of low-income earners, particularly in the farming sector, remains high, dampening spending in this segment. That, coupled with increased unemployment and declining overtime hours, suggests the current economic expansion is not fully benefiting some segments of the labour market, he said.

Thailand's unemployment ranks increased by 73,210 in 2017 to 500,000, accounting for 1.18% of total workers. Structural problems are a key factor leading to the higher unemployment rate amid the growing freelance and automation trends, said Mr Yunyong.

The EIC is holding the country's economic growth forecast for this year at 4%, mainly driven by robust exports and tourism, as well as global economic growth.

In 2018, exports are expected to grow 5% year-on-year, while tourism numbers are forecast to expand 8%.

In the meantime, Surapol Opasatien, chief executive of the National Credit Bureau, has sought to soothe jitters, saying the upsurge in household debt could be largely attributed to loans extended by commercial banks and state-owned financial institutions, for which the loan scrutiny process is quite tough.

Loans extended by thrift and credit cooperatives at the end of 2017 rose year-on-year by 62.2 billion to 1.82 trillion baht.