The Asian Development Bank (ADB) forecasts Thailand's economic growth to inch up to 4% this year and 4.1% next, underpinned by increasing public and private investment and domestic consumption.

Most of the big-ticket projects are expected to be implemented in 2018 and 2019.

Public investment, which had grown by 28.4% in 2015 and 9.5% in 2016, declined by 1.2% last year as a new Government Procurement Act caused delays in procurement and project implementation.

Five large projects in the Eastern Economic Corridor (EEC) selected for fast-tracking are targeted for approval by the end of this year, with immediate implementation through public-private partnerships (PPP), the report said.

Major infrastructure upgrades in the corridor include expansion of a deep-sea port, as well as improving links to business parks, airports, the capital and adjacent coastal areas.

The implementation of public investment projects is expected to be smoother than in the past, as government agencies become more familiar with the new procurement system introduced last year, the ADB said.

"As global trade growth moderates this year and next, export demand should grow at a more modest pace than last year, especially for electronics," said the Manila-based multinational lender.

"Agriculture growth, having turned positive last year, is likely to stabilise at a much lower growth rate. The slack in growth will likely be compensated for by a surge in public investment, especially in big-ticket infrastructure projects, as domestic consumption and private investment play complementary roles. Annual GDP growth is thus eyed to inch up to 4.0% this year and a shade higher next year."

The ADB said Thailand's private investment is also expected to pick up, albeit modestly, as capacity utilisation tightens in some sectors after the huge drawdown of inventories in recent years. 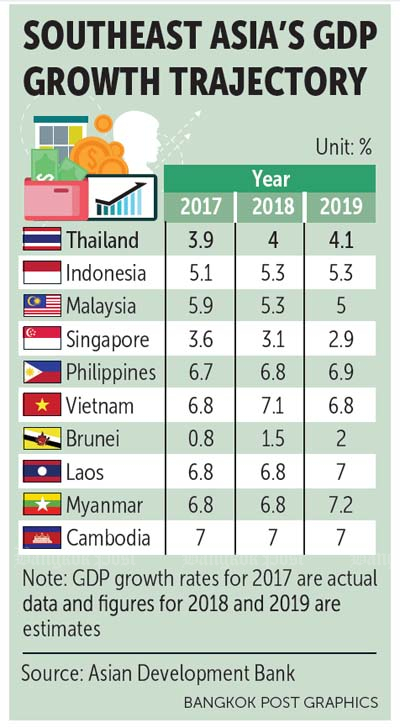 Last year's rise in export demand has pushed up utilisation in some key industries, warranting new investment in machinery and equipment to expand capacity. The implementation of big public infrastructure projects, especially in transport, could spur private investment in construction. The business outlook is more optimistic, prompting a hike in applications for investment privileges from the Board of Investment.

Domestic consumption is expected to increase slightly. Government aid packages implemented in recent years to help low-income earners are expected to buoy their spending levels. A hike in the daily minimum wage by 5-22 baht, effective on April 1, should also help sustain private consumption, the ADB said.

Household debt appears to have peaked. Growth in public consumption is expected to accelerate with a supplemental budget to support local communities and agriculture reform.

"With continued low inflation and a comfortable balance of payments, ample scope exists for monetary easing, even after allowing for an expected hike in US interest rates," the ADB said. "Further large portfolio inflows could push the baht up further, threatening to hinder export competitiveness. Manageable public and external debt means there is scope to stimulate growth through higher fiscal deficits in the near term."

External risks to the economic outlook include a disappointing global economic recovery, while a possible delay in implementing the government's public infrastructure investment programme is also a threat, as most of the large EEC projects are expected to be financed through public-private partnerships.

Finally, uncertainty regarding the timing of the next general election may affect recovery in private investment.

A worsening skills shortage needs to be addressed to reinvigorate growth and achieve the goals of the government's Thailand 4.0 development strategy, the ADB said.

Meanwhile, the bank has lifted its overall outlook for growth in developing Asian economies, citing a pickup in global export demand, though it warned of risks from a potential China-US trade war.