The relaxing of requirements is estimated to allow an additional 50,000 debtors to participate in the Debt Clinic, the scheme that pools unsecured bad loans from 16 local and foreign commercial banks, with the aim of turning them into performing assets.

The eased requirements allow self-employed workers and those whose legal cases are still being adjudicated in the scheme, said Ruchukorn Siriyodhin, deputy governor overseeing financial institution stability at the central bank.

Those with overdue debt of more than three months from credit, cash cards or personal loans with at least two banks before April 1, 2018, can also participate in the clinic, she said.

The relaxed regulations will come into force from May 1, 2018.

Existing regulations call for regular income earners who fail to repay credit, cash card or personal loan debts with at least two banks for more than three months before May 1, 2017 as qualified to join the debt clinic scheme. Moreover, the debts must not be involved in a legal procedure.

Participants must not be older than 65 years, their principal plus unpaid interest must not exceed 2 million baht per debtor and they must be borrowers of the 16 participating local and foreign commercial banks.

Participants are still prohibited from running up new debt for five years and they must take courses on financial literacy and good financial management.

After entering the programme, participants are required to repay the debt only through Sukhumvit Asset Management (SAM) and their restructured debt carries interest rates of 4-7% for up to 10 years, depending on the monthly income of debtors.

The clinic, which began on June 1, 2017, is part of the Bank of Thailand's effort to reduce household debt by pooling non-performing loans owed to multiple creditors under SAM management to better address them by collecting comprehensive information on troubled debtors.

Mrs Ruchukorn said the Debt Clinic is the central bank's mechanism to lower the country's household debt-to-GDP ratio, which has declined from 80.8% in 2015 to 77.5% in 2017.

The central bank is amending the Sukhumvit Asset Management Act to allow non-bank companies to transfer bad assets to the asset management company, a move that will allow bad debtors of non-bank firms to participate in the scheme.

SAM chairwoman Pongpen Rueng-­ virayudh said after the Debt Clinic began on June 1, 2017, 33,736 borrowers applied to join the scheme and 1,074 of them have been accepted.

She said that 594 participants with 130 million baht in debt have entered into agreements to restructure their debt and one of them has already paid off debt, while 5% of them exited the programme as they failed to comply with the requirements.

"We expect there will be around 50,000 qualified borrowers under the adjusted conditions," she said.

In the meantime, chairman of the Thai Bankers' Association Predee Daochai said the amended conditions will not encourage those who continue to service debts to default in exchange for lower interest payments as a good credit score is more important than a lower interest rate. 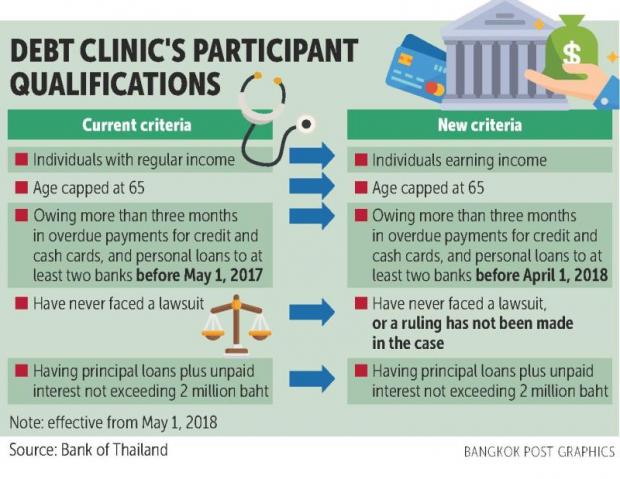