Thailand's exports continued to grow in March, albeit at a slower pace, helping first quarter shipments rise 11.3%, the highest in seven years.

The Commerce Ministry reported Monday the country's customs-cleared exports grew for the 13th straight month in March, up by 7.06% year-on-year in March after increasing 10.3% in February. 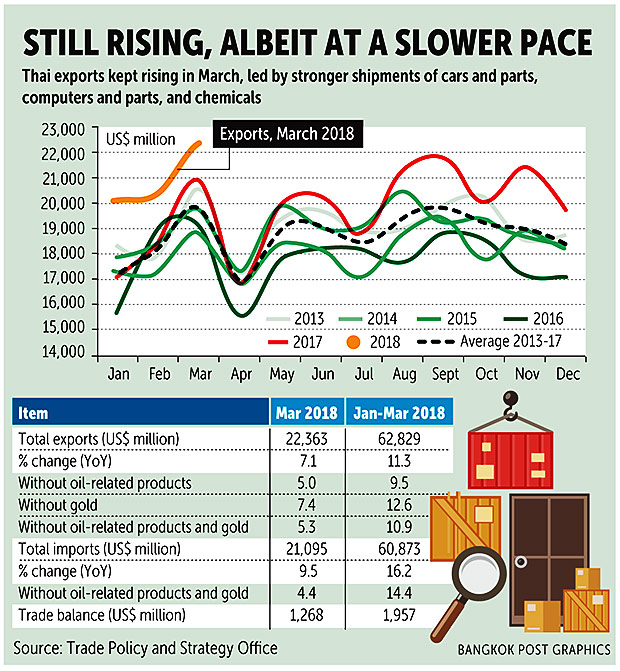 "Shipments rose for all markets except China, which contracted 8.7% year-on-year because of a high base last year," said Pimchanok Vonkorpon, director-general of the Trade Policy and Strategy Office. "The highest exports in March were to India, gaining 21.7%, with Asean growing 17.8% and South Asia 16.9%. Also seeing strong growth were shipments to the US [up 11.1%], the Middle East [10.6%], the EU [up 8.7%] and Australia [up 6.2%]."

The ministry reported exports of agricultural and agro-industrial products shrank for the first time in March after rising for 16 straight months, down 3.3% year-on-year to $3.45 billion.

The drop was primarily because of lower rubber shipments based on export control measures as well as a dip in sugar exports. However, other farm products like tapioca, rice, chicken and fruit still retained growth momentum.

Overall industrial product shipments also posted an expansion for 13 months in a row, up 7.7% in March to $17.99 billion, thanks to strong exports of electronics, chemicals, and plastic pellets.

Despite a strong baht, the ministry targets an export growth of 8% this year, after a 9.9% rise last year.

The baht has risen 3.9% against the dollar so far this year, hovering over a four-year high.

"We still believe overall exports will fare quite well this year on the world's economic expansion and economic recovery of key trading partners such as the US and EU," said Ms Pimchanok. "Economies of other countries such as Japan and China are also on the path of continuous expansion."

Visit Limlurcha, vice-chairman of Thai National Shippers' Council, said Thailand's exports are likely to keep growing further thanks to promising shipments of industrial products like electronics and electrical appliances, notably in the Internet of Things and smart phone segments.

However, Mr Visit said he remains concerned about the negative impact of the strong baht and trade brawls between the US and China.

A close watch on the impact of an incoming tropical storm during April 24-27 on the farm sector is also needed, he said.

In a related development, Siam Commercial Bank's Economic Intelligence Centre (EIC) has raised its export forecast for this year to 7.5% from the previous projection of 5% due to higher global demand derived from the global economic recovery.

An upward revision in export growth projection is also attributed Thailand's extension of Generalised System of Preferences with the US to 2020, which helps ease concerns over the impact of the US's trade protectionist measures, according to the EIC.

Petroleum exports could reap a windfall from increasing crude oil prices, of which the EIC projects Brent crude price at US$68 per barrel for this year, a 26% year-on-year rise compared with $64 projected previously.

"Potentially improved exports for 2018 could push Thailand's annual economic growth to above 4%," said the EIC.