A reserve price of 37.5 billion baht has been set for each licence to be auctioned on Aug 4 in the 1800-MhZ frequencies. The bandwidth is commonly used for 4G phone networks. Jasmine International has been banned from participation. If all four licenses cannot be auctioned off, the regulator will keep the remaining licenses to auction later.

The telecom regulator's acting board has set Aug 4 as the date for the 1800-megahertz spectrum auctions, 40 days ahead of the expiration of the Total Access Communication (DTAC) concession.

The board of the National Broadcasting and Telecommunications Commission (NBTC) will also approve the 1800MHz spectrum auction draft Wednesday after a board meeting.

The draft will closely mirror the design of the 90MHz bandwidth auction, which divided the spectrum into three slots or licences of 30MHz with a reserve price of 37.45 billion baht each.

The decision is a response to the Council of State's suggestion that the existing NBTC board has the authority to hold the planned auctions of the 1800- and 850MHz spectra.

Third-ranked operator DTAC will have to bid for a licence in the planned 1800MHz spectrum auction to secure bandwidth provision services in the long run, said NBTC secretary-general Takorn Tantasith.

The cost of the 1800MHz licence will be 50% cheaper than the 2300MHz spectrum TOT recently granted DTAC for the company's 4G services.

According to Mr Takorn, the 1800MHz licence will provide the company with better value than the 2300MHz deal in terms of fixed operating costs, including yearly spectrum payments.

"Through the evaluation of overall dimensions, the 2300MHz spectrum's operating cost per year will be 50% higher than that of the 1800MHz licence that the NBTC plans to auction on Aug 4," the secretary-general said.

Mr Takorn said the NBTC plans to put up for auction 90MHz of downlink-uplink bandwidth on the 1800MHz spectrum, divided into three licences containing 30MHz of bandwidth each. 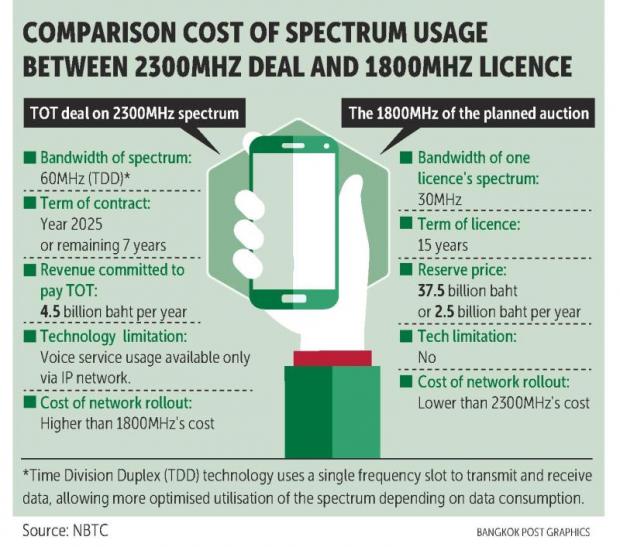 Mr Takorn said the cost of the 1800MHz licences will be 2.5 billion baht per year for a 15-year term.

The 1800MHz spectrum range has no constraints for providing voice services through basic networks and supports many device models.

The agreement will last through 2025, or seven years.

DTAC has to install a nationwide network on the 2300MHz spectrum and has committed to providing TOT with an annual revenue stream of 4.51 billion baht on the basis of minimum guarantees through the signal roaming agreement.

Additionally, the 2300MHz ecosystem has not been developed to provide voice services via the basic network. People who hold a 2300MHz handset can only use voice services through internet access, such as applications or VoIP services.

DTAC operates the 1800MHz and 850MHz spectra under a CAT Telecom 2G concession that expires on Sept 15.

The auction draft of the 1800- and 850MHz spectra was approved by the existing NBTC board in December last year and passed a public hearing in December.