Neither bank has even discussed the matter

After a week of mounting speculation over a potential consolidation between Krungthai Bank (KTB) and TMB Bank, KTB's president and TMB's chairman both dispelled the rumours Wednesday, saying there is no merger discussion plan.

KTB has no plan to merge with other financial institutions, and the bank's major shareholders and board have yet to discuss the government's tax incentives for local bank mergers, said Payong Srivanich, the bank's president.

Given that the government holds the lion's share in KTB, the bank has both more advantages and restrictions than other commercial lenders, he said.

The bank has better access to government workers and clients in remote areas in compliance with the government's policies, but development speed in some financial areas has been slower, said Mr Payong.

The bank's competitive edge is on par with its industry peers, he said.

Mr Payong said larger asset size would open more opportunities for business and client base expansion, while merged banks will be able to enjoy the government's tax incentives.

"Apart from the tax incentives, the bank needs to consider readiness, suitability, and necessity because each financial institution has different strengths, weaknesses, and fundamentals," he said.

The cabinet last week approved a royal decree on tax deductions and exemptions in an effort to encourage mergers among Thai banks to create large "champion" banks that are able to compete with foreign banks.

The tax privileges have prompted speculation that the measures are aimed at paving the way for the amalgamation of some banks that have large stakes controlled by the government, while stock analysts have pointed out that a merger between KTB and TMB is possible as the government owns the majority of both banks.

Under the tax incentives, which will be effective until the end of 2022, merged banks can deduct corporate income tax and receive a waiver from value-added tax, specific business tax and revenue stamps.

KTB is 55.07% owned by the Bank of Thailand's Financial Institution Development Fund, while TMB is 25.92% held by the Finance Ministry.

Rungson Sriworasat, the TMB chairman, said after the board of directors' meeting Wednesday that it did not discuss a merger and such issue is not in the pipeline as the bank needs to wait for a clearer law about the tax incentives to decide whether a merger is advantageous to the bank. 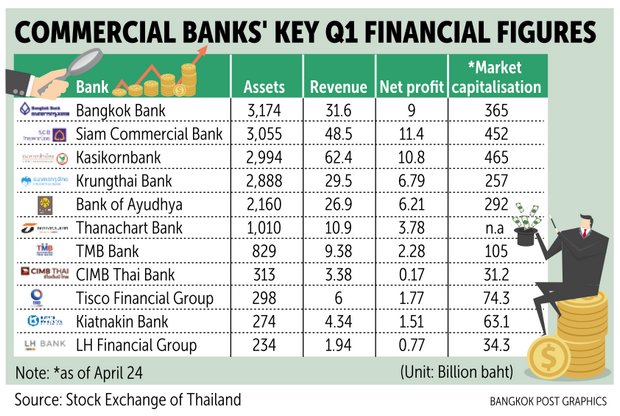 In the meantime, two large banks -- Bangkok Bank (BBL) and Siam Commercial Bank (SCB) -- said they have no plan to merge with other banks.

Chartsiri Sophonpanich, president of BBL, said the bank is positioned regionally and is confident it can compete and expand business both locally and regionally.

BBL, the country's largest bank by assets, has a presence in 15 countries with 32 branches.

In Asean alone, it has operations in nine of the 10 country members (excluding Brunei) with 16 total outlets.

SCB has paid more attention to digital development in order to expand its new client base and migrate existing customers to the digital platform, said Mr Arthid.

Product and service development are other key factors for expanding the customer base, strengthening business operations and cutting down on operational expenses, he said.