The residential condominium market in Bangkok's central business district (CBD) remains positive as the take-up rate rose significantly because of reduced supply in the first quarter this year. 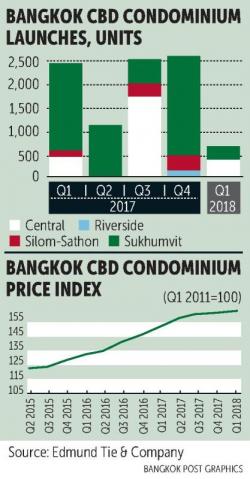 Condo prices increased throughout Bangkok and this is expected to continue with stronger demand from domestic and international buyers, said Edmund Tie & Company, a real estate consulting firm.

The company reported the number of condo units in Bangkok grew by 623 units in the first quarter this year. This is a fall from the 2,504 units released in the fourth quarter of 2017.

The majority of the units launched in the first quarter were located around central Lumpini, followed by the Sukhumvit area. Access to green spaces, luxury views and connection to public transport makes central Lumpini popular with developers and buyers.

The average pre-sale rate for upcoming condo projects in Bangkok's CBD market was an impressive 81.0% in the first quarter.

Condominium values increased slightly in the first quarter of this year as the price index rose to 159 from 158 in the fourth quarter of 2017.

Edmund Tie & Company reported a variety of new projects in the second quarter of 2018. Among them are Loft Sathorn12 and Loft Sukhumvit.

"We expect the sales momentum of the condo market to continue. There is keen interest from both domestic and international investors looking to participate in the CBD condominium market in Bangkok, and prices are set to climb further," said the report.

"Developers have a positive outlook on the market, believing there is still potential for growth and will look to move their businesses forward. Medium to large developers are typically looking for prime CBD locations, because demand for homes in the CBD tends to be more resilient. The main challenge for developers will be increasing land prices, as new record land prices have become a regular occurrence. CBD plots will continue to escalate in price as the availability of land parcels becomes increasingly challenging."

Bangkok's CBD office market is expected to be active throughout 2018, with total supply restrained to 160,596 sq m until 2020. This implies that the vacancy rate will remain low and rents will continue to rise, the report said.

Average asking rents are likely to remain positive in the second quarter of 2018. The company expects rents to rise steadily at a modest pace in early 2018 and beyond.

Tenant occupancy levels are expected to remain strong in 2018, with demand emanating from both domestic and international companies.

Edmund Tie & Company anticipates demand will be bolstered by online businesses and firms operating in the technology sector.

The company reported the net absorption of the office market remained in the positive territory in the first quarter.

The higher office take-up rate in the CBD also signals stronger leasing activity, with the growth in demand for office spaces extending from the fourth quarter of last year.

Separately, there were no new completions in the CBD area in the first quarter of 2018, and the total office stock in the CBD remained at 1.833 million sq m. There are also several developments in the pipeline supply.

The growth in net absorption and higher occupancy level adds upward pressure on rents, and the average asking rents in the CBD increased to 820 baht per sq m per month in the first quarter. The prime office gross rental index for the period improved to 127.0, up from 125.0 in the first quarter of 2017.