The country's economic expansion became broader-based in the first quarter, thanks largely to a spillover effect from solid exports, the central bank's chief says, while the Financial Ministry's think tank is maintaining its economic growth forecast for 2018 at 4.2%. 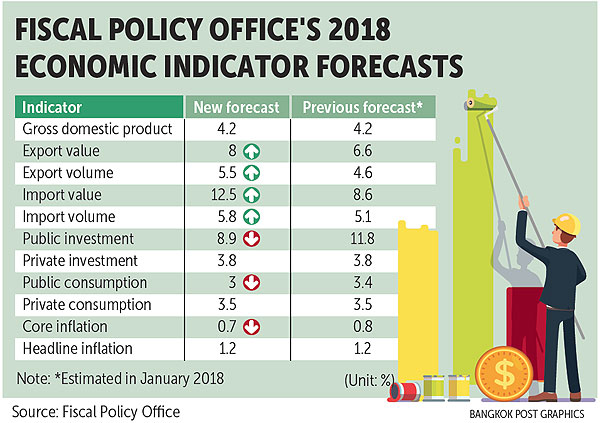 Thailand's export growth for the first three months was 11.3% year-on-year, the highest in seven years. The Commerce Ministry this week said exports grew to US$62.82 billion (1.98 trillion baht), with imports rising 16.2% year-on-year to $60.9 billion in the first quarter. Thailand enjoyed a $1.95-billion trade surplus in the period.

Subdued farm income could also be due to structural problems, he said.

The Bank of Thailand yesterday signed a memorandum of understanding with the Labour Ministry and Social Security Office to collaborate on economic and labour data to guide the country's labour policy.

In the meantime, the Fiscal Policy Office (FPO) kept its economic growth forecast for 2018 unchanged at 4.2% but raised its export growth forecast while cutting growth projections for public consumption and investment.

The think tank slashed its state investment growth estimate for the year to 8.9% from the 11.8% predicted in January and also cut the public consumption growth target to 3% from 3.4%, Pornchai Thiraveja, an adviser to the FPO, said at a press conference.

The FPO, however, upgraded its export growth projection in terms of value to 8% this year from the 6.6% estimated three months ago and raised the import growth forecast to 12.5% from 8.6%.

The new export growth forecast comes after the FPO raised its global economic growth prediction to 3.98% from 3.93% in January. The US, Hong Kong, Taiwan and the EU are expected to see stronger growth.

Mr Pornchai said the shortfall in the government's investment budget disbursement target during the October-to-December quarter contributed to the lower full-year growth forecast for state investment.

Given the sign-off on 180 billion baht worth of investment contracts, the FPO expects that 60.2% of the 577-billion-baht investment budget will be disbursed this fiscal year, he said, adding that the prediction is based only on investment that has an impact on the economy.

Despite the downward revision of the forecast for state investment growth this year, the new estimate is far above the 1.2% contraction last fiscal year, Mr Pornchai said.

He said the FPO is keeping private consumption and investment growth targets at 3.5% and 3.8% this year.

The FPO also raised its forecast for the number of foreign tourists visiting Thailand and tourism income to 39.9 million and 2.13 trillion baht this year.

In January, the FPO predicted that foreign tourists to Thailand would reach 38.2 million and contribute 2.05 trillion baht.

Pisit Puapan, an expert on macroeconomic policy at the FPO, said that external factors, particularly in the potential trade war between the US and China, and other geopolitical tensions are headwinds for the economy.