What kind of leaders do Thai workers prefer?
Business

What kind of leaders do Thai workers prefer?

Worldwide leading contract labour supplier Adecco Thailand recently carried out a survey among its Thailand candidates to determine what kind of leadership characteristics are most admired and preferred by Thai workers. The survey, with 2,076 respondents, identified the most preferred leadership characteristics which were: to provide equal opportunities; communicate clearly; make fair and balanced decisions; not take advantage of people; and listen to what staff have to say. Least preferred characteristics were to demand obedience and to exercise strict discipline over subordinates. Apparently what workers prefer in their workplace employment are encouragement, communication, fair-minded and democratic-style leadership.

Adecco Group is based in Zurich, Switzerland, with over 33,000 full-time employees located in 5,100 branches in 60 countries and territories, with 700,000 contract workers, described as "associates". The Adecco Group offers a wide range of human resource solutions and services, including temporary and permanent placements, career transitions, talent development and outsource consulting.

In Thailand, Adecco was established in 1989, with 300 full-time employees, 17,000 "associates" and eight offices, seven of which are in Bangkok, and one on the Eastern Economic Corridor.

Adecco identifies this oldest group as diligent and dedicated employees who follow the rules and have high loyalty. They prefer to work with leaders who provide equal opportunities (76%), are decisive (65%), make fair and balanced decisions (62%), keep their word (62%), and listen to what employees have to say 59%. These are hard-working and devoted employees, believing in hierarchical management systems, with strong leaders making good decisions, and preferring fixed working processes. Leaders therefore need to be strong, clear and correct decision-makers, giving feedback and avoiding face-losing direct criticism.

Adecco identifies this middle-aged group as individualistic, concerned with work-life balance, open-minded and keen on self-development. They prefer leaders who provide equal opportunities (72%), communicate clearly (69%), make fair and balanced decisions (67%), are decisive (64%), and respect their employees (64%). Work/life balance and independence are important considerations for them. Leaders need to respect this age-group as individuals with their own lives to lead, and must consult with them, providing recognition for achievements.

Adecco identifies these younger workers as valuing the meaningfulness of work, but tend to be more quick-tempered and willing to abandon tasks more readily. Like other groups, they prefer to work with leaders who provide equal opportunities (74%), communicate clearly (72%), make fair and balanced decisions (71%).

However, they expect leaders not to take advantage of subordinates (70%), and are respectful (69%). Younger generations demand respect for individual rights. Leaders need to create flexible working environments and be role models to retain employee trust. Relationships can be improved by encouraging workers to cooperate to improve work processes and team-work, while also providing career development and progression.

Adecco identifies this youngest group as being familiar with technology, influenced by social media, and desiring to be accepted. Their criteria are somewhat different from other age-groups. They most prefer leaders who listen to what employees have to say (78%), do not take advantage (78%), are respectful (72%), communicate clearly (72%), and make fair and balanced decisions (71%). This youngest generation is much more independent than their seniors. Leaders working with this group need to give them latitude to work, but be available for consultation and guidance. Leaders can take advantage of the familiarity of this age group with technology to improve work systems and communication. They need to be encouraged by career progression and constructive feedback.

The Adecco survey suggests that Thai workers expect leaders to treat everyone equally without prejudice, putting the common good ahead, with judgements based on actual performance. Leadership requires clear communication and balanced decisions. Rather than authoritarian leaders, a more democratic leader is preferred, who listens, ensures clarity, and respects privacy.

According to Khun Tidarat Kanchanawat, Adecco Regional Manager, "The leader is an important factor that influences an employee's decision whether to stay or leave the company. For today's leaders, business management is not the only thing they have to consider. People Management is also a key challenge."

The Adecco report stresses the importance of younger generations. Their role in creating innovation is vital. The rapid progress in technology means that leaders may also need to be followers and learners, to integrate technology into work processes. However, decision-making remains with the leaders, who are recognised as having more experience and therefore remain accountable. The best approach is to make employees feel included in decision-making, while also leaving final decisions and accountability to recognised leaders. Decisions also need to be carefully considered, such that, once made, they do not need to be rescinded or modified, so as to avoid confusion, and loss of respect from employees.

Since there are different generations involved in every workforce, leaders need to adopt a flexible approach in order to engage each generation's strengths and adopt leadership styles to encourage every level to attain high performance. 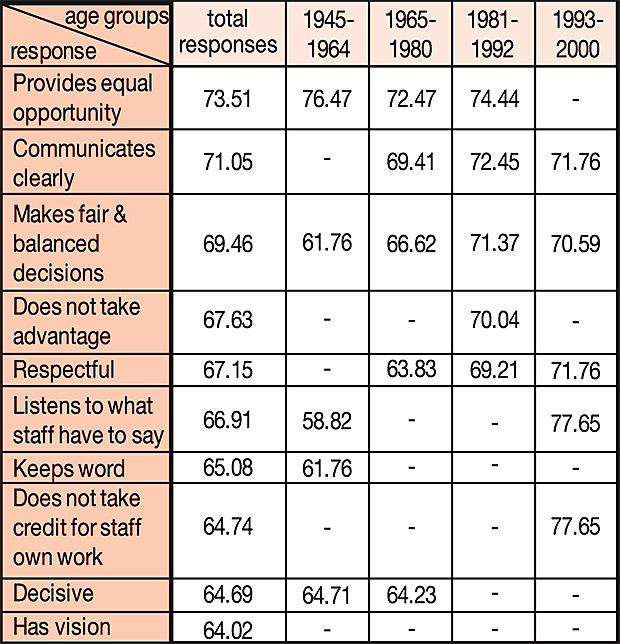 Source: Adecco: What kind of leader do Thais prefer to wrok for?: March 2018