JFin Coin's day opened for trading Wednesday morning, complete with an audience and live TV coverage, but the cryptocurrency quickly tanked and its value was down by 57% by the end of the day, with just 3.10 baht being offered per token. (Photo FB/JFinCoin)

The sale price stood at 3.10 baht per token as of press time, down from 6.60 baht during the ICO on Feb 14. The token peaked at 6.45 baht before plummeting, much to the dismay of early investors who had already endured a month-long delay before trading finally got under way.

J Ventures, which is offering the tokens, mapped out in its white paper a plan to use currently trending blockchain technology to create a way of providing loans to people spurned by banks for reasons ranging from their credit history to low income.

Yet the company was criticised by early investors for delaying trading and switching exchanges from Thai Digital Asset Exchange (TDAX) to Coin Asset -- another local digital asset exchange with much lower liquidity -- and barely communicating with those who had bought in or engaged in promotional work once the ICO had closed.

The company explained the trading delay by saying it was waiting for the government to clarify ICO policies.

Yet investors flocked to social media to vent after the company waited until after the ICO to release a financial report announcing that it was saddled with large debt.

J Ventures is a financial services subsidiary of Jay Mart Plc, which operates in the wholesale and retail sectors for mobile phones and technology accessories.

ICO transactions are similar to crowdfunding, whereby an issuer presents a business model to investors. The difference is that the raised funds are in the form of digital currencies using blockchain technology and the deals are enforced using smart contracts.

Last year saw an explosion of ICOs, leading to numerous reports of exit scams. According to reports, as many as half of those ICOs have already failed.

J Ventures has created 300 million digital tokens. It sold 100 million within the first 55 hours of the February ICO, with some 2,200 buyers acquiring the tokens, leading it to cancel a planned second round before trading began.

The company said it acquired 660 million baht from the ICO, which was highly anticipated and billed as the first ICO for an SET-listed Thai company. J Venture's affiliation with Jay Mart, a household name in Thailand, also boosted investor confidence.

J Ventures chief executive Thanawat Lertwattanarak said he was not surprised to see the price plummet on the first day of trading, adding that even Facebook traded lower on its public debut.

"Technology takes time, as it [is not easy] to build up a system, so investors might not be able to envisage the future at this point until the project has been completed," he said.

Mr Thanawat said he expects JFin Coin to rank among the world's top 100 digital tokens in the future by capitalising on blockchain technology, the company's digital lending platform (DLP) and Jay Mart's business ecosystem. There are nearly 2,000 digital assets available at present.

JFin Coin will begin trading on Cash2Coins, another local exchange, on Monday and plans to get listed on Hong Kong's HitBTC and South Korea's UPbit soon, Mr Thanawat said.

The remaining 200 million tokens may be reserved for other ICOs, he said.

Mr Thanawat said the company will target borrowers that have been blacklisted, have financial problems or otherwise cannot get a loan approved, a market of 28.5 million people. 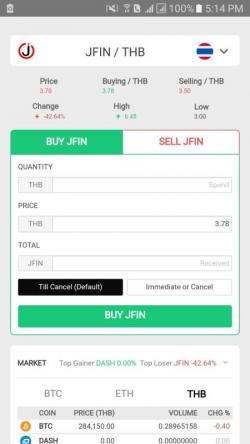 Trading price data for JFin Coin is shown on a mobile screen.