Construction and hospitality to be hurt

Eight migrants work on construction of the Bang Sue Grand Station transportation terminal. Under the law set to go into effect on July 1, there would have to be at least 32 Thais employed as well. (Photo by Pattarapong Chatpattarasill)

Business operators are crying foul over a new law that caps the share of migrant workers at 20%, saying the regulation poses a "critical obstacle" for small and medium-sized enterprises (SMEs) struggling to cope with labour shortages.

The Act on the management of migrant labour will cap their employment at 20% of a company's workforce, effective from July 1 onward.

The law was passed by the National Legislative Assembly in April, and will cover all migrant labourers, regardless of whether they are hired in Thailand, according to the government's memorandum of understanding.

Supant Mongkolsuthree, chairman of the Federation of Thai Industries (FTI), said the private sector does not understand why the government has to regulate the share of migrant workers in each company, because there has been a labour shortage for several years.

"The labour shortage is widespread across the country, pressuring operators to hire migrant workers from neighbouring countries," he said.

Mr Supant said local SMEs will be most affected by the labour shortage.

There are 3 million SMEs in the country, accounting for 99.7% of businesses, and they employ 11 million people.

SMEs are estimated to hire roughly 10 million migrant workers, both legally and illegally.

"It is very hard for SMEs to seek local labour because most jobs require physical labour, such as waiters, cleaners, construction workers and fishery workers, and migrant workers accept these jobs," he said.

"The employment cap at 20% will force SMEs to hardships and it is impossible to cap the proportion of migrant workers in the SME sector." 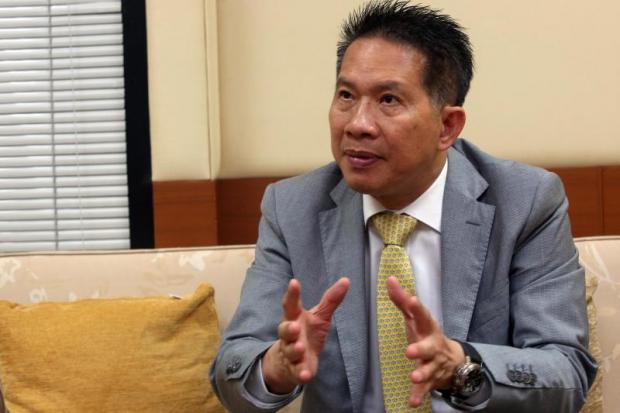 Supant Mongkolsuthree, chairman of the FTI, questions the need for the new law, saying there has been a labour shortage for years. (Photo by |Weerapong Wongpredee)

Mr Supant said large companies will suffer less from this law because they hire roughly 3-4 million migrant workers in total.

Moreover, large companies can invest further on automation and robotics.

However, the FTI called for the Labour Ministry to reconsider this new Act and proposed the 20% employment cap be applied to business segments or by job type instead of a generic regulation.

Nonetheless, Supawan Tanomkieatipume, president of Thai Hotels Association (THA), said if the new labour Act is enforced, hotel business will be affected severely, especially small and independent hotels, as well as hotels located near borders that hire many foreigners.

The Act is also expected to hurt many restaurants and small businesses as many use migrant workers.

"The new law will not impact five-star hotels because most workers are local people. But restaurants and food stores will suffer as they depend on migrant labour," Ms Supawan said.

She said restaurants that hire many foreigners may need to reduce staff to avoid violating the law, but that will be reflected in lower quality service.

In order to protect small- and medium-sized businesses and save registered labourers, THA will soon ask the government to revise the foreign worker cap from 20% to 30% of total staff.

Taniwan Koonmongkon, president of the Thai Restaurant Association (TRA), said the new Act will harm thousands of restaurants across the country and may force them to close their doors, as many restaurants hire foreign workers to make up more than half of their staff.

"We totally disagree with this implementation as it could force some restaurants to close down business," Ms Taniwan said.

The association estimated that more than 1 million registered foreigners work in restaurants in Thailand. More popular businesses such as som tam and seafood restaurants and food stores mostly use migrants.

"Business owners prefer to use foreign workers, giving them work permits and the same social welfare same as locals. They cannot find Thais to work such jobs," she said.

TRA urged the government to encourage locals to work in restaurants.

Daecha Tangsin, owner of the 525-room Ramada Plaza Menam Riverside Bangkok Hotel, said the negative impact from the new law will be larger for hotels in tourist destinations.

"Foreign labourers working at hotels in Bangkok are lower in proportion than those in major tourist destinations, like Phuket, where up to half of staff are foreign," he said.

His hotel will see minimal impact from this new law as it uses fewer foreign labourers and also outsources hiring to other companies.

Suphin Mechuchep, managing director of property consultant JLL Thailand, said the impact from the new law would be large for the construction industry as it depends largely on foreign labourers.