AirAsia Group has confirmed it will invest US$150 million (4.8 billion baht) in a maintenance repair overhaul (MRO) facility at the Eastern Economic Corridor's U-tapao airport. 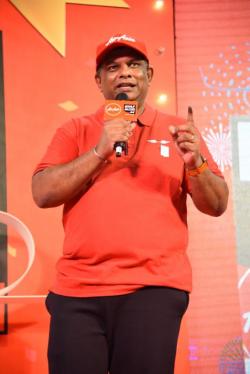 Fernandes: Can get started immediately

The facility, to be completed in one year, will serve as a maintenance centre for all 200 of AirAsia Group's aircraft in the region.

"We can immediately begin the project once the Thai government approves it," he said. "But it will still take a month to reach a final agreement with partners and about 12 months to construct the facility."

Thailand is a significant destination for AirAsia investment because of the high potential of its tourism industry.

AirAsia, Asia's largest low-cost carrier in terms of passengers carried, operates 200 aircraft in Thailand, Malaysia, Indonesia, the Philippines and India. That number is projected to grow to 300-350 in the next five years.

The MRO facility will offer services to other airlines and is forecast to attract 10-20 supporting firms to invest in Thailand.

The company is seeking parties to invest in the construction of U-tapao's 1.5-billion-baht low-cost terminal project, which will take 12-18 months to build.

"AirAsia should not invest and operate the low-cost terminal because it may affect the operations of other airlines," Mr Fernandes said.

The company asked the Thai government to reduce U-tapao's airport tax to 200-250 baht from 400, saying the lower tax will attract more visitors to Thailand.

Mr Somkid said the government will consider the airport tax cut proposal, which he said would depend on the ability of AirAsia to attract visitors to Thailand.

The firm has established Thailand as its human resources, accounting and purchasing headquarters.

U-tapao's capacity can be raised to 20-30 million passengers (equal to that of Don Mueang airport) in the next five years, once a high-speed railway links all three airports.

The company's two aircraft at U-tapao service nine routes. AirAsia plans to add two aircraft a year to its U-tapao fleet and expects to add 400 aircraft by 2025.

"By that time, the company will operate long-haul routes from Korea, Japan, China, Australia and Europe," Mr Fernandes said.