Exports including from Laem Chabang port (above) were a chief driver of the rise in GDP in the first quarter, and forecasts for the rest of 2018-19 have been raised. (File photo)

Following a robust first-quarter performance, the National Economic and Social Development Board (NESDB) on Monday raised its economic growth forecast to 4.2-4.7% this year from 3.6-4.6% in February.

Wichayayuth Boonchit, deputy secretary-general, said the growth will be largely supported by an improvement in global economic growth and rising international commodity prices, driving exports of goods and services; favourable expansion of government consumption and acceleration of public investment; a clearer private investment recovery; and an improvement in household income.

"Almost all sectors performed well in the first quarter, be it household consumption, exports, tourism or public and private investment," said Mr Wichayayuth. "We expect growth can reach 4.5% for the whole year if these components keep up."

The NESDB also increased its export growth forecast to 8.9% this year from an earlier estimate of 6.8%.

The board further raised its forecast for private investment growth to 3.9% from 3.7%, with private consumption growing to 3.7% from 3.2%.

But the NESDB cut its projection for government consumption to only 3% growth from 3.2%, and public investment to 8.6% growth, down from 10%.

Mr Wichayayuth said enforcement of the EEC law will boost private investment, while industrial capacity in the first quarter stood at 72%.

Tthe NESDB reported Monday that Thailand's GDP in the first quarter had risen by 4.8% year-on-year, the fastest pace in five years, accelerating from 4% growth in the previous quarter.

After seasonal adjustment, in the first quarter the economy expanded by 2% compared with the previous three months. 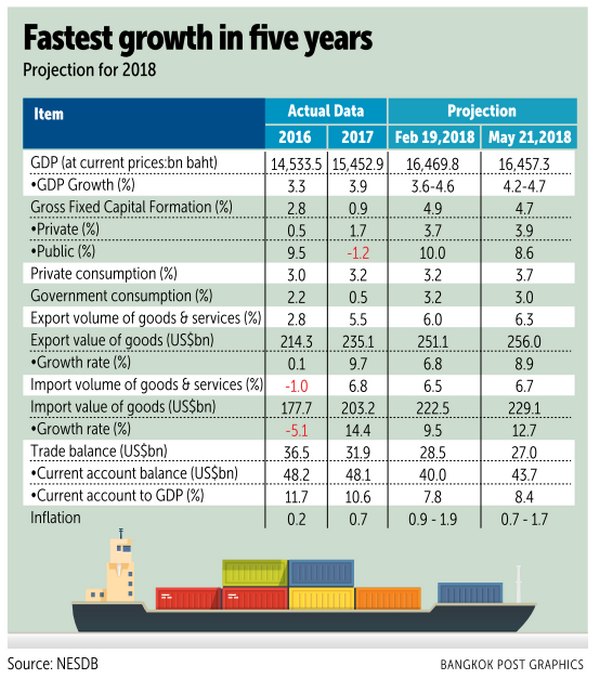 On the expenditure side, the expansion was supported by the acceleration of private consumption, government consumption, total investment and robust export growth.

On the production side, manufacturing, along with wholesale and retail trade, expanded at an accelerated rate.

Meanwhile, the agricultural and construction sectors reversed from a contraction in the preceding quarter to favourable growth rates.

First-quarter economic growth fared much better than the central bank's forecast, underpinned largely by higher than expected spending from both the public and private sector, particularly in private consumption and investment, said Don Nakornthab, the Bank of Thailand's senior director for the economic and policy department.

Domestic spending and external demand are expected to gain momentum in the period ahead, pushing economic growth to continue, he said.

The Bank of Thailand's Monetary Policy Committee is set to review its 4.1% economic growth forecast for this year during its meeting in June.

"The 4.8% growth rate was the highest in 20 quarters or five years. It's a delight to see the economy expand at that level, but it's not a surprise. This isn't what we spoke about, but we work hard to improve the economy. We want to see peace in our country to move towards reform," said Deputy Prime Minister Somkid Jatusripitak.

All economic indicators, including private investment, accelerated in the quarter, while the agricultural sector also expanded at a satisfactory level, he said.

The agricultural sector's problems, which have been accumulating for a long time, are easing slowly, said Mr Somkid.

Confidence, especially in the private sector, will increase and once projects under the public-private partnership scheme are initiated, related sectors will also improve, he said.

Standard Chartered Thai Bank economist Tim Leelahaphan said the bank is maintaining its 4.3% growth forecast for 2018, higher than the 4% consensus.

"We think [economic] growth will pick up further, likely on a sentiment boost from further clarity on the election schedule," said Mr Tim.

With a positive economic growth outlook and higher inflationary pressure, the Bank of Thailand is expected to embark on interest rate normalisation this half, he said.

"We think market expectations on rates this year are likely to shift toward tightening. We maintain our non-consensus call of two 25 basis points hikes starting in the third quarter," he said.

Headline inflation was 1.1% year-on-year in April, returning to the central bank's target range of 1-4% for the first time since early 2017.

Siam Commercial Bank's Economic Intelligence Centre (EIC) projects Thailand's annual GDP growth to be above 4% as a result of better than expected economic data in the first quarter.

Thailand's economic recovery momentum has been propelled by growth in exports and tourism, while public budget disbursement has supported an expansion in private investment, said the EIC.

Three risk factors going forward are the baht's appreciation, protectionist US trade measures and financial volatility on the back of the global trend of monetary tightening, said the think tank.

The League of Islamic Council of Southern Thailand has issued a statement opposing the Cannabis and Hemp Bill, the Progressive Liquor Bill and the Civil Partnership Bill, as they are not in line with the Islamic principles.