With no aid in sight, 22 digital TV owners must pay 4.8 billion baht in licence fees Wednesday or risk a September broadcasting blackout.

Digital TV operators must submit their fifth licence payment by 4.30pm Wednesday or face having their channels blacked out after a 120-day warning period, the telecom and broadcasting regulator has warned.

The operators have argued that they cannot afford to pay the instalment Wednesday, but the National Broadcasting and Telecommunications Commission (NBTC) reaffirmed that operators must pay for their fifth instalment by the due date, as Section 44 has not been invoked to ease their financial burdens.

According to the Association of Digital Television Broadcasting, most digital TV operators will be unable to pay because they were expecting Section 44 to be invoked before the deadline.

The NBTC will issue warning letters to operators who fail to meet the deadline. Late payers are required to kick in 7.5% annual interest as well.

The warning letter will give operators 30 days to make their payments. The NBTC can issue three warning letters to operators who fail to meet the deadline, each granting an additional 30 days for payment.

After the letters are sent, the NBTC will issue an administrative order as a final call, allowing the operators to make the payment plus interest within 30 days. Operators who do not comply with this last call will have their TV channels blacked out. 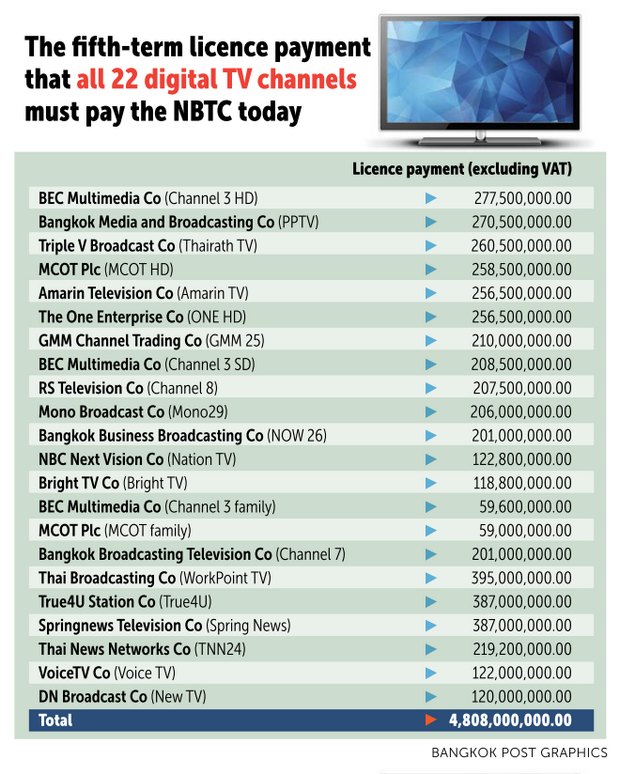 Takorn Tantasith, secretary-general of the NBTC, said the regulator insisted it would enforce payment at a Monday meeting with Supap Kleekachai, president of the Association of Digital Television Broadcasting.

Mr Supap said he discussed how operators should handle the existing burden, as most cannot pay the combined 4.8 billion baht for the fifth term.

Meanwhile, additional assistance from the government through Section 44 has yet to be invoked despite approval by the cabinet last month.

"We are concerned over the existing financial burden. Inevitably we have to receive a series of warning letters while waiting for the government to invoke Section 44," Mr Supap said. "We have another 90 days from the three warning letters, plus another 30 days of administrative order, and we hope Section 44 will be invoked during the period."

The rescue package include a three-year debt moratorium on unpaid licences and a 50% reduction in ground network fees for 24 months. Digital TV operators have already paid licence fees of 34 billon baht, or 68% of the licence payment total.

The NBTC also suggested that the government should allow the existing digital TV operators to transfer their licences to other private companies as part of measures to rescue those who are strapped for cash.

The current law allows the entry of new shareholders to a company that has a digital TV licence, but it doesn't let the licences be transferred.

Despite cabinet approval of the additional assistance to the digital TV operators for easing their burden since last month, Section 44 has yet to be invoked.

Mr Takorn said the NBTC has to force operators to make licence payments, as it forced Thai TV to pay, with three warnings and the administrative order as the final call before a channel is blacked out.

There are 22 digital TV channels run by 15 companies, down from the initial 24 channels and 17 companies, after two Thai TV channels exited the business and are still in disputes with the NBTC at the Supreme Administrative Court.

While the fifth payment of the digital TV licence amounts to 4.8 billion baht, the fee varies by type of channel and payment terms.

Only Bangkok Television and Radio Channel 7 have already made the fifth payment, together worth 372 million baht.

Mono29 chief executive Navamin Prasopnet said his company is committed to paying for the licence on time.

An executive from RS Plc, the operator of Channel 8, said the company would be happy to pay for the licence fee, as it has done on time every year.

But RS chief executive Surachai Chetchotisak previously said he thought it was highly unlikely that the government would let some digital TV operators return their digital TV licences by invoking Section 44.

Mr Surachai said using Section 44 to solve the digital TV operators' financial problems would be unacceptable, since every operator accepted the terms and conditions before making the massive investment in both licence fees and operating costs.