The Digi scheme serves as 'insurance' for employees. By Jesus Alcocer

The AIS Digi online training platform is a collection of courses for all staff.

Training programmes allow companies to move staff being replaced by technology to more useful posts, but getting trained effectively is ultimately the employee's responsibility, says Advanced Info Service (AIS), which will freeze its headcount at 12,000 for the second year in a row.

Jobs once performed by humans are increasingly being automated, affecting thousands of employees across industries. Thailand's four major banks will let go of some 43,000 employees in the next three years. Deutsche Bank is reducing its trading staff by 25%, and announced it would cut 7,000 jobs by the end of 2019.

Telecom operators are following the lead of financial services firms, if somewhat more cautiously, aware of the large public backlash sustained by that sector. Total Access Communications (DTAC) is cutting its staff of 5,000 by 1,000 this year, while AIS is likely to keep its headcount at 12,000 for a second straight year, said Kantima Lerlertyuttitham, chief human resources officer at AIS.

"We made a commitment to our employees for 12,000, it is not a magic number," said Ms Kantima.

While the number is fixed for now, it may change down the line to respond to market pressures, she said.

"We are not rushing to get rid of people," said Ms Kantima.

AIS is the most heavily staffed among Thailand's three largest operators, with a 3,333 subscription-per-employee ratio, one-half that of True and DTAC.

The company struggled to contain costs in the last two years. Its sales and administrative expenses (a measure that includes the salaries of most employees) increased by 48% in 2016, and decreased by about 15% in 2017 -- decreasing the operator's net loss from 27% to 2% of its revenue.

The 12,000-employee target will allow the company to lay off employees in functions that have become superfluous, and hire new people for in-demand roles like R&D.

"For example, in my department we had someone whose sole purpose was taking ID pictures. He is now gone, but I am sure he can still find employment in smaller companies," said Ms Kantima.

AIS Digi, the company's new training programme, serves as "insurance" for the employees referenced above, she said, giving them the opportunity to learn the skills necessary to succeed in a digital workplace. Under the concept, employees who successfully go through the programme will be redeployed to value-added functions.

The programme, a collection of online classes and courses all staff can access, is an outgrowth of the company's established training scheme, which was restricted to high-level employees.

Ms Kantima was unable to point to a clear example of success that saw a lower-level employee promoted to a higher position through the training provided by AIS Digi.

"Success is not measured only in terms of promotions, but in the context of employees goals," she said.

The programme, which was introduced early this year, is not obligatory, but allows employees to learn from anywhere, and includes a description of the learning objectives the employee must reach for his or her desired position.

WHOSE BURDEN IS IT?

Programmes like AIS Digi raise the question of who, if anyone should be responsible for the fates of employees replaced by digital solutions. Companies like AIS have taken a middle of the road path, saying it is the company's responsibility to provide educational tools, but the employee's responsibility to develop the skills needed in a digital space.

"We are committed to our employees, but they should also be committed to improving their skill set. For people who don't commit, it is the norm for the organisation to take action for them," she said.

On the flip side, Ms Kantima says the company believes it is still its responsibility to provide training for employees that will be departing to work elsewhere in the near future.

These programmes are also important first steps to settle the debate of how much companies, or other parties, must provide employees before discharging their responsibilities.

On one hand of the spectrum are companies who ask employees to educate themselves with free tools available on the internet, while other firms require their staff to undergo mandatory training, and that commit to hiring those employees once their re-education concludes.

AIS Digi falls somewhere in the middle of the spectrum, but may provide the company with a public relations shield once it decides to downforce its workforce.

The 150-million-baht AIS Digi may be a fruitful long-term investment. The programme can serve as a filter of the most motivated and capable employees, and accelerate in-house talent development, allowing it to bypass hiring costs and higher wages associated with outside hires. 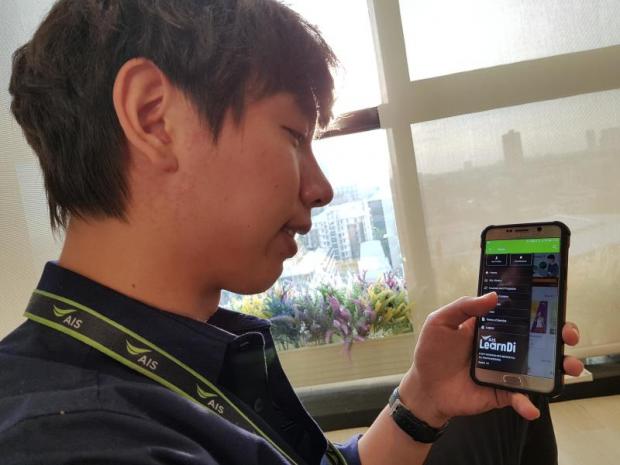 The AIS Digi online training platform is a collection of courses for all staff.