Power capacity reserve to be raised

The increase suggests the country's electricity capacity is in dire need of more domestic supply after heavy reliance for several years on imported power.

The government has wanted to push forward construction of new power plants for years, for both coal and nuclear, but both are heavily opposed by activists.

The new power reserve proportion is being revised by the Energy Policy and Planning Office (Eppo), which has had the responsibility of adjusting this international standard for more than four decades.

A lightning strike on the high-voltage power transmission line from the 1,878-megawatt Hongsa Lignite coal-fired power plant in Laos a little after midday caused an hour-long power outage in the region last Friday.

The outage spread to the northern part of Bangkok and Pathum Thani.

The new reserve percentage has yet to be studied by policymakers, but the reserve will be divided by region. Regions have supply imbalances that go from 15% in the southern part of the country to upwards of 40% in central Thailand.

"We must never have another mass power outage, given the dire economic consequences," said Mr Siri.

In 2013, a lightning bolt hit the main high-voltage power transmission line in Thailand's southern region, leaving the entire region without electricity for 3-4 hours. 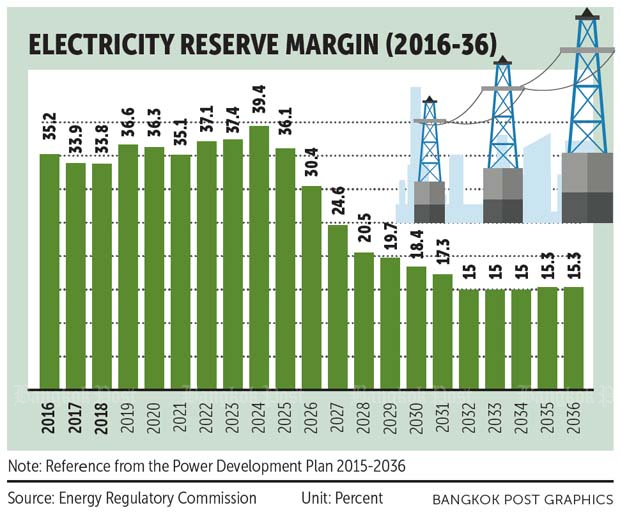 An anonymous source at an energy policymaker said power in the southern region will be at its most critical level after 2020, when demand for power will grow above the local power generation system.

The situation may worsen if the new coal-fired power plants' development schedules are further delayed.

This situation has been blamed on huge capacity from renewables over the last four years, because the power generation system will need more capacity for back-up when renewable energy is unstable.

A final draft of the PDP is expected to replace the existing PDP, last revised in December 2014, this August.

The state proposed to establish joint ventures with the winners of the Erawan (G12/61) and Bangkot (G2/61) gas blocks auctions in the Gulf of Thailand.

The bidder will have to submit a technical and commercial proposal to the Department of Mineral Fuels as well as a state partnership proposal.

This suggests that state agencies or state enterprises, including national oil and gas conglomerate PTT Plc and its E&P business arm, PTT Exploration and Production Plc (PTTEP), could legally participate.

The energy policymaker and the Finance Ministry will screen qualified participants and set a joint venture distribution.

Bidders are scheduled to submit their proposals on Sept 25. Winners, to be announced in December, will sign production sharing contracts in February 2019.