Confidence dips in May as fuel prices bite consumers
Business

Confidence dips in May as fuel prices bite consumers

Consumer confidence in May dropped on negative factors such as rising oil prices and concerns over the slow economic recovery, low commodity prices and higher living costs. 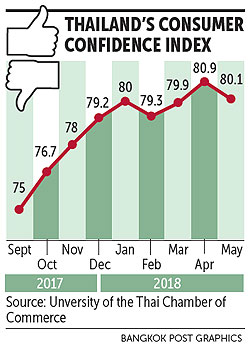 According to the latest survey by the University of the Thai Chamber of Commerce (UTCC), the consumer confidence index in May slipped to 80.1 after climbing to 80.9 in April.

Thanavath Phonvichai, vice-president for research at the UTCC, said rising fuel prices led to the highest cost of living since July 2014.

"Consumers are concerned about higher spending and they are more careful," he said. "It was surprising that the economy grew continuously but the index still dropped due to fuel prices."

Rising oil prices of only 2-3 baht per litre have forced consumers to spend an additional 5 billion baht a month, excluding increases in LPG or natural gas, Mr Thanavath said.

Other negative factors included the unstable political situation due to the potentially postponed national election, which remains a pressure on confidence.

Data from the Thai Chamber of Commerce showed that local economies at the provincial level recovered slightly as farm prices were steady.

The overall economy was better, eking out slow growth. Business competition was intensified by the entry of e-commerce operators and foreign companies.

Incomes increased slightly, so the UTCC will closely monitor the index in the next few months to focus on people's purchasing power.

Mr Thanavath said the UTCC will review the country's GDP growth next month for a possible upward revision from the 4.4% projected earlier.

"Growth may not be less than 4.5% because economic growth will be driven by tourism, export and investment, both public and private," he said. "Tourist revenue will increase to 38-39 million baht from 37-38 million, while the export target will increase to 8-10% from 6-8% in the previous projection."

Separately, the UTCC conducted a survey of spending behaviour during World Cup 2018, which runs from June 14 to July 15, finding that overall money circulation will total 78.39 billion baht, increasing by 2.4% from Euro 2016.

Spending volume is predicted to be less than during World Cup 2014, which generated 95.15 billion baht in circulation, as the current climate is less active because popular teams such as Italy and the Netherlands did not qualify for the tournament.

Promotions from the business sector related to football matches will also attract customers.