Rush hour in Ho Chi Minh City. Vietnam agreed to life non-tariff trade barriers such as tighter import inspections, but there has been no progress in six months. (File photo)

The commerce and industry ministries are escalating demands that the Vietnamese government eliminate non-tariff barriers on cars imported from Thailand, as Thai car shipments to Vietnam have stalled for over six months.

Thai exporters suspended their car shipments after Vietnam tightened inspections for all CBUs at seaports earlier this year. CBU cars are required to undergo tests in a Vietnamese laboratory to ensure they meet environmental and emissions standards.

But the laboratory facility is not large enough to process a large volume of cars, which suggests the measure is aimed at blocking car imports.

Import duties for Thai-made products were eliminated under the Asean Free Trade Area.

Somchai Harnhiran, the deputy industry minister, said the two ministries are working to prepare information as they monitor Vietnam's non-tariff barriers, effective from this year.

"Since Vietnam used the non-tariff barrier policy, Thailand's automotive industry lost roughly 80% of car exports to that country," he said.

"Both governments will be in talks soon and we are hoping for a good sign from the two countries."

All 10 Asean countries have agreed on a free-trade agreement with no such barriers.

Recently, the ministry also held a meeting with car makers and auto parts makers to solve the problem.

"The government has prepared countermeasures for some Vietnamese products exported to Thailand, but it cannot disclose more details because that will be plan B if the bilateral negotiation fails," said Mr Somchai. 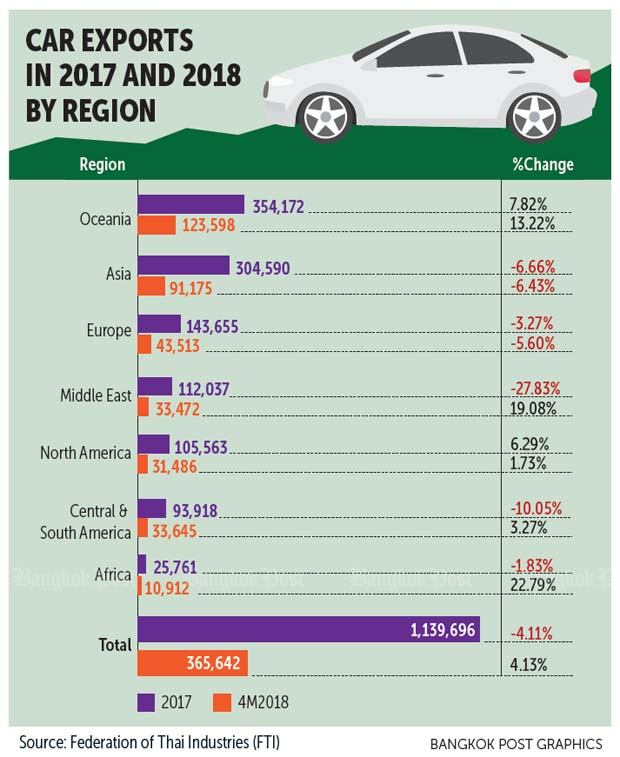 He said car makers in Thailand reported that related exports to Vietnam stood at 4,590 units for the first quarter, with the annual target set at 65,000 units.

"Of the total volume, about 2,000 units were from Honda, but many car makers said they will stop efforts to export to Vietnam," said Mr Somchai.

Auramon Supthaweethum, director-general of the Trade Negotiation Department, said Thailand will push forward negotiations with Vietnam at every meeting session, adding that laboratories must comply with mutual recognition arrangements (MRAs) for the inspections.

Vietnam only has one automotive testing agency, requiring roughly 30 days for vehicles to clear.

Thailand, by contrast, has many agencies to test imported CBU cars under the Thailand Automotive Industry and Thai Industrial Standards Institute.

"Once Vietnam agrees on the MRAs, the next step will be to test the cars ourselves before making shipments there," Mrs Auramon said after meeting with automotive-related agencies.

"We aim to cut the custom clearance procedure at Vietnamese ports to facilitate Thai exports and reduce duplicate inspections."

She said Thailand will propose MRA procedures at the Joint Trade Committee meeting scheduled for August.