Imports of electronic and plastic waste surge in 2018
Business

Imports of electronic and plastic waste surge in 2018

Mountains of electronic and plastic waste are stacking up rapidly in Thailand after China banned the import of such trash last year, say a senior official at the Customs Department.

For the five months through May, Thailand imported 212,000 tonnes of plastic waste, up dramatically from 145,000 tonnes for all of 2017, and 52,200 tonnes of e-waste, compared with 64,400 tonnes last year, said Chaiyut Kumkun, a spokesman for the Customs Department. Thailand imports such waste for recycling, Mr Chaiyut said.

After China's ban on plastic and e-waste imports, waste has shifted here, he said.

The death of a male short-finned pilot whale, which had 80 plastic bags weighing 8 kilogrammes in its stomach in Songkhla province, and a series of crackdowns on illegally imported waste have sparked concerns that Thailand has become a dumping ground for the world.

Laem Chabang port is the main gateway to Thailand, bringing in 90% of the imported waste, Mr Chaiyut said, adding that 500 containers are used to load the waste every month. 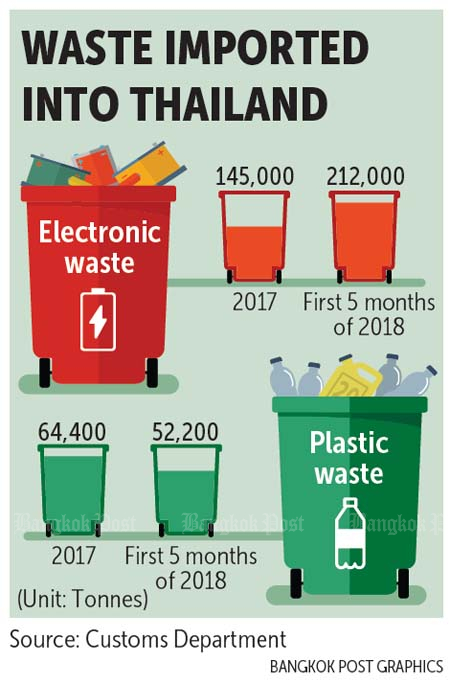 Plastic waste is subject to a 30% import duty, while e-waste is waived. The waste importers must have licences granted by the Department of Industrial Works (DIW).

There are 162 cargo containers loaded with plastic and e-waste that have been moved to Thailand in recent months and are being inspected, while others found to be importing waste illegally were redirected. Of those containers, 90 are at Laem Chabang port, 35 at Bangkok port and 37 at Ladkrabang Cargo Control Customs Office.

The DIW recently suspended the licences of five recycling factories after discovering they had imported waste for recycling at other factories that do not have licences. The move came after the DIW and police carried out an inspection of 148 e-waste recycling factories, including seven factories licensed to import electronic waste from abroad, after several of them were found to be illegally importing and processing such materials.

The solutions include pooling information and using big data analytics to determine whether any plants import more waste than can be recycled; having the Customs Department use X-rays to scan all cargo containers that import scrap for recycling; making importers pay the costs incurred from redirecting waste; and forming a committee to set measures to curb loopholes and raise penalties.