Asean wants to balance economic development with human and environmental wellbeing, but financing sustainability is a big challenge.

Sustainability and planning for climate change have become mainstream components of economic planning globally as the world has witnessed the adverse impacts of irresponsible growth pathways.

Although high-carbon and resource-intensive development places great stress on the environment, the conundrum facing Southeast Asian countries is how to properly balance economic development with the long-term wellbeing of humans and planet.

Most Asean policymakers now realise, however, that they can no longer treat economic development as a separate issue from the environment, or pursue a grow-now-and-clean-up-later approach.

"Asean is growing very fast and that is why the world is looking at us," Simon Tay, chairman of the Singapore Institute of International Affairs, told Asia Focus recently. "Our growth outperforms the world and all countries are doing quite well. Growth is good but the question is what are the causes or downsides of growth.

"Our region is growing fast but polluting not just the local environment but also the global one. But the growth we had in the past where we just grew and polluted people out of their lands is no longer doable."

Masagos Zulkifli, Singapore's Minister for the Environment and Water Resources, said economic growth in the past relied heavily on unbridled exploitation of natural resources and rampant industrialisation. This caused a grave harm to the earth from deforestation to air pollution and acute water scarcity.

"Unsustainable production and consumption are exacerbating the global threat of climate change," he said. "The extreme storms and floods that have brought devastation to our region are a foretaste of things to come, if we do not change our habits and the way we live."

All evidence shows that growth strategies that ignore environmental impact will eventually result in expensive cleanup and mitigation measures. The Asian Development Bank (ADB) projects that Southeast Asia's gross domestic product (GDP) could be reduced by up to 11% by 2100 from the impact of climate change if preventive steps are not taken.

Taking such warnings to heart, policymakers now agree that a "green growth" strategy is inseparable from long-term economic development and is the only way forward to deliver sustainable prosperity. 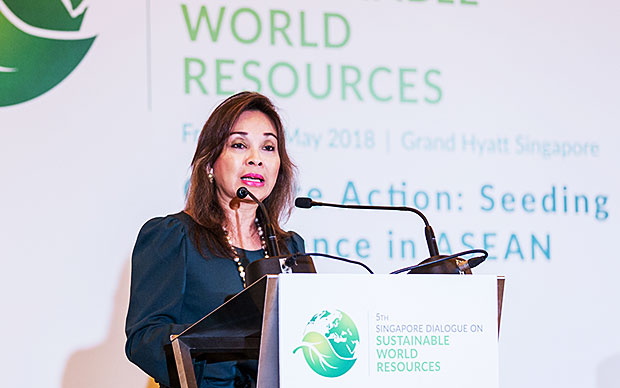 "Our plans and strategies for climate action and green growth will remain as ideas if there is no appropriate budget to implement them" — LOREN LEGARDA, Philippine senator

A green strategy, experts say, needs to be a mainstream component of national development plans and government policies, budget allocation and guidance.

"Countries that can move toward the sustainable path quickly are more likely to have set a clear direction on economic and environmental policies that are long-term and stable," said Prof Tay.

Loren Legarda, a senator from The Philippines, pointed out that while sustainable growth policies are essential, so too is the money to back them.

"Our plans and strategies for climate action and green growth will remain as ideas if there is no appropriate budget to implement them," she said.

The government of The Philippines, a country at high risk from natural disasters, now has a budget dedicated specifically to climate change adaptation, mitigation and disaster risk reduction, she said.

"As for legislation, the Philippines has enacted laws for clean air, clean water, ecological solid waste management (ESWM), rainwater catchment facilities, renewable energy, and other measures that protect the environment and address climate change and disasters," she added.

The country has also introduced the first-in-the-world Philippine Green Jobs Act and Green Job Standards Accreditation and Certification system, which aim to promote the creation of green jobs and foster a transition toward a green economy.

Many cities such as Masbate, Guimaras, Sorsogon, Ilocos Norte and Negros Oriental have also resolved to create a coal-free environment and prohibit the use of coal as a source of energy.

In Indonesia, after the transboundary haze crisis in 2015 that affected millions of people across Southeast Asia, authorities have taken significant steps to reduce and control the occurrence of fires.

Bambang Brodjonegoro, Minister of National Development Planning, said the country has adopted more robust forestry and peatland management plans and aims to contribute to clear skies across the region.

To curb forest burning for land clearance, the government formed the Peatland Restoration Agency in 2016 to restore carbon-rich peatlands through programmes such as a land swap scheme. As well, regular mapping exercises ensure that water in the peatlands is not too low, which would increase fire risk. 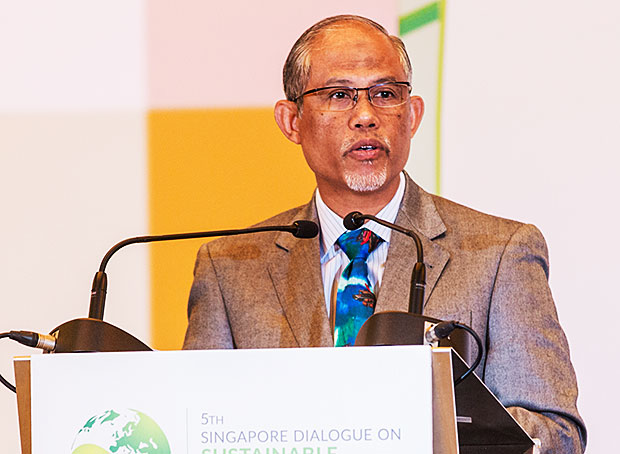 "Singapore today is enjoying the dividends of our early investment in green growth and environmental resilience," says Masagos Zulkifli, Minister for the Environment and Water Resources.

Singapore is the pioneer among Southeast Asian economies when it comes to investing in green growth and environmental resilience. Seeing sustainability as the cornerstone of development policy, the country is now enjoying the yield from the seeds planted over five decades.

Through strong policies, partnerships and a passion for sustainability, Singapore has focused on developing strengths in addressing its most vulnerable areas such as limited water and energy sources.

Central to that effort is research and development (R&D). In 2006-07, for example, it allocated S$700 million in R&D funding to expand the clean technology sector, followed by another S$700 million in 2011.

Prime Minister Lee Hsien Loong, who also chairs the Research, Innovation and Enterprise Council (RIEC), noted earlier that the country's priority is to build up core R&D capabilities in selected strategic areas. To do that, it needs to attract and develop a significant concentration of talent to sustain a critical mass of advanced research activity.

"Singapore today is enjoying the dividends of our early investment in green growth and environmental resilience," said Masagos Zulkifli, Minister for the Environment and Water Resources.

These dividends have been in the form of a clean, safe and liveable city-state that attracts talent and investment and creates jobs and business opportunities, he said.

Among the success stories is the drive to become a global "hydrohub", bringing global water companies together to develop innovative technologies to solve urban water challenges.

In 2015, the water sector contributed US$2.25 billion to Singapore's GDP and created 14,000 jobs. The home to more than 180 water companies, Singapore has one of the densest concentrations of water companies globally.

Through a pragmatic and long-term view of environmental governance, sound policy and the application of science and technology, Singapore has seamlessly incorporated sustainability into the economic development agenda, turning areas of vulnerability into key economic contributors, said Mr Zulkifli. 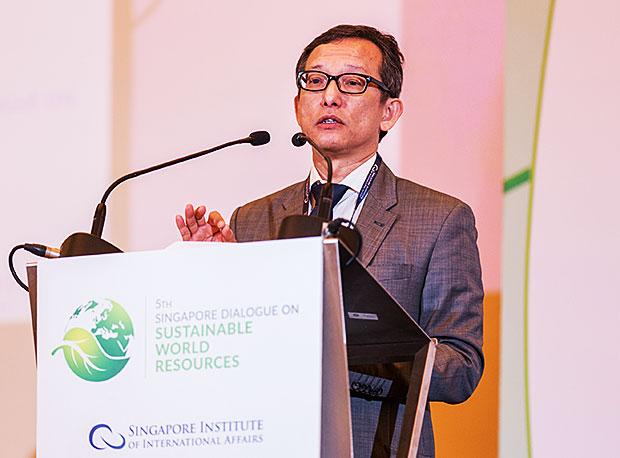 Asia is belatedly warming up to the concept of green finance, says Simon Tay, chairman of the Singapore Institute of International Affairs. Photos: SIIA

While planning a green strategy is challenging, paying for it is equally daunting. According to DBS research, Asean needs to increase green investment by 400% each year to protect its people and economies from climate change and other environmental shocks.

The demand for additional green investments in Asean is estimated at $3 trillion between 2016 and 2030.

Current flows of green finance in the region are estimated at $40 billion, it said, against an annual need of $200 billion annually.

Indonesia will require the largest amount of green finance, along with Thailand and Vietnam. The bank put the value of the necessary infrastructure at $1.8 trillion, with $400 billion each required for renewable energy, energy efficiency, and food, agriculture and land use.

"Our region has not been fast to develop green finance. … We are suffering from short-termism but things are starting to move in this region," Prof Tay said.

"We are at the junction or inflection point where things will be different in five years from now," he said, adding that some countries in Asean have started develop green finance roadmaps and investment platforms.

"Green investment in the Asean region can transform the region into a green economic powerhouse that supports a growing population, and provides returns for investors," said Ma Jun, a special adviser on sustainable finance at UN Environment and co-chair of the G20 Green Finance Study Group.

Prof Tay said that with the right policies in place, Asean countries will have the chance to adjust, become innovative and efficient and even take green leadership roles.

"Thailand has the potential to become very innovative in agribusiness and a leader in electric motor vehicles," he said.

Experts urged countries in Asean to reimagine the green development pathway as something that is inseparable from economic development planning.

"We do not exist in isolation from each other. Whether industrialised or developing, we should all realise that we are on this one planet together. The transformation toward green growth is an uphill battle, but it is one crusade that we must all fight and win," Ms Legarda said.

"The green path is a tricky path," Prof Tay said. "Some people have seen green as a cost which inhibits growth. We have to reimagine going green in a way that not only links to growth, but as a way for us to innovate and become more resilient.

"When we say we are trying to make the economy stronger, we shouldn't just refer to it being larger. We mean less carbon, more energy efficient and more resource efficient to produce more with less. This is when Asean will achieve a truly innovative, resilient and growing economy."