PTT taking on Glow for B100bn

The move is forecast to help PTT speed up expansion to the domestic electricity generation market amid bearish conditions, with record high power reserves in the country.

For GPSC, a market newcomer, analysts predict it would have taken almost a decade to become a leading competitor because there are no auctions for independent power producers or large power plant development planned for the next few years.

Acquiring larger power plant operators is the only way for GPSC to grow its power business.

Tevin Vongvanich, president and chief executive of PTT, said the board of directors last Friday approved the acquisition of 1.01 billion shares or 69.1% in Glow, which is majority owned by France-based Engie.

GPSC will propose a mandatory tender offer for the remaining shares in GLOW, some 451.9 million shares or 30.89%.

GPSC is in the process of negotiating a share sale and purchase agreements.

Sutthichai Kumvorachai, a stock analyst from Maybank Kim Eng, said PTT may see potential in this takeover because the deal could not only provide additional electric capacity but also create added value.

The final stage of the deal may not be concluded soon, as it is contingent on future share price and business direction.

But Mr Sutthichai said GPSC's next step may verify the business portfolio between Glow and GPSC's existing business because the latter has many business units to diversify.

The 100-billion-baht deal will be one of PTT's largest single investment cost compared with other payments in the past -- PTT's initial public offer (IPO) programme in 2001 and purchasing traditional and untraditional oil and gas resources such as oil sands in Canada, a deep-sea gas block in Mozambique's Rovuma Area 1 and a coal mine and palm oil plantation area in Indonesia during 2008-12.

The next process of this acquisition is to conclude appropriate share selling prices, a discount deal and a financial fund until the deal is done.

The due diligence process will cover assets worth 100 billion baht, based on Glow's asset value and market capital.

Over the last few years, PTT announced that it would monitor possible disruptive technologies in the energy sector after learning from failures and achievements in several businesses. 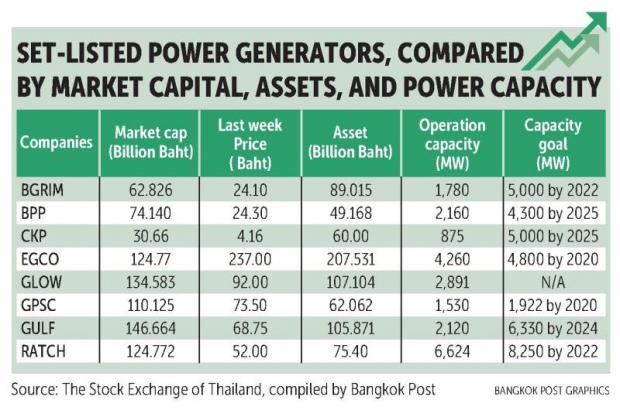 PTT has stressed its desire to not be taken off guard by technological disruption, with high-ranking executives telling staff it will not go the way of Nokia or Kodak.

"We must find new potential businesses to add value to our existing business," Mr Tevin said.

Glow is one of PTT's main gas buyers and has almost a dozen small power producer licences due for renewal.

The latest deal, therefore, could add value from gas that PTT produces in the Gulf of Thailand.

PTT's existing exploration and production business will be used to create further opportunities in gas activities, including gas-fired power plants.

Gas extracted from the Gulf of Thailand consists of ethane, propane, butane and methane.

The first three are fundamental raw materials for plastic and fibre that PTT uses to produce value-added engineering plastic, a segment in which PTT has operated for over 20 years.

As methane is used for power generation and transport, the Glow-GPSC deal will play a part in this business strategy.

Moreover, PTT is increasing budget allocation for R&D from less than 1% of its total net profit each year to 3% this year.

This is a part of the company's plan to mobilise new businesses for growth.

PTT itself has close connections with state-owned private research houses and seeks to inject funds into join ventures with startups.

One of GPSC's prominent projects is an energy storage business that has recently joined hands with US-based startup, 24M Technologies Inc.

For GPSC, it plans to licence 24M's patent to develop energy storage in Thailand and to become an Asean production hub in this new sector.