The Commerce Ministry looks set to revise up the country's export growth target next month after outbound shipments grew for a 15th straight month in May.

The ministry says the looming trade war is unlikely to derail exports this year.

Pimchanok Vonkorpon, director-general of the Trade Policy and Strategy Office under the Commerce Ministry, said customs-cleared exports rose by 11.4% year-on-year in May to US$22.3 billion (737 billion baht) after a 12.3% jump in April.

The export performance in most markets except the Middle East expanded, with extraordinary growth seen in India, Cambodia, Laos, Myanmar and Vietnam, which reported double-digit increases.

Ms Pimchanok said the export of agricultural and agro-industrial products eased to 1.5% growth in May and $3.61 billion after recording strong growth of 9.8% in April, which was boosted by shipments of fresh and frozen fruits and vegetables, tapioca products, rice, and frozen and processed chicken.

"The ministry is confident of achieving its export growth target of 8% this year" after a 9.9% jump last year, Ms Pimchanok said, citing the weakening baht, while oil prices have recovered, leading the export value of oil-related products to rise in May.

"But with a better-than-expected export performance, the ministry is set to revise up the growth target in July," she said.

Nonetheless, Thailand needs to monitor the deepening trade rift between the US and China, Ms Pimchanok said, though this country has yet to feel negative effects.

"We need to keep an eye on protectionist US measures, as they will lead to trade uncertainties and foreign exchange volatility," she said. "The measures could negatively affect the global economy and trade stability."

In a related development, Deputy Commerce Minister Chutima Bunyapraphasara is scheduled to hold a joint meeting with the private sector, including the Thai Chamber of Commerce, the Federation of Thai Industries and auto parts and steel makers, next Tuesday to discuss the effects of the US-China trade spat and measures needed to mitigate risk.

Kalin Sarasin, chairman of the Thai Chamber of Commerce, said his group will meet representatives from the US Chamber of Commerce in Washington later this month to discuss trade and investment opportunities and the impact of the budding US-China trade war.

"The private sector is concerned about the widening of the US-China trade rift, which may affect Thai exports in the long run," he said. "We hope the US chamber will help raise this issue with the Congress to exempt Thailand from any US trade measures." 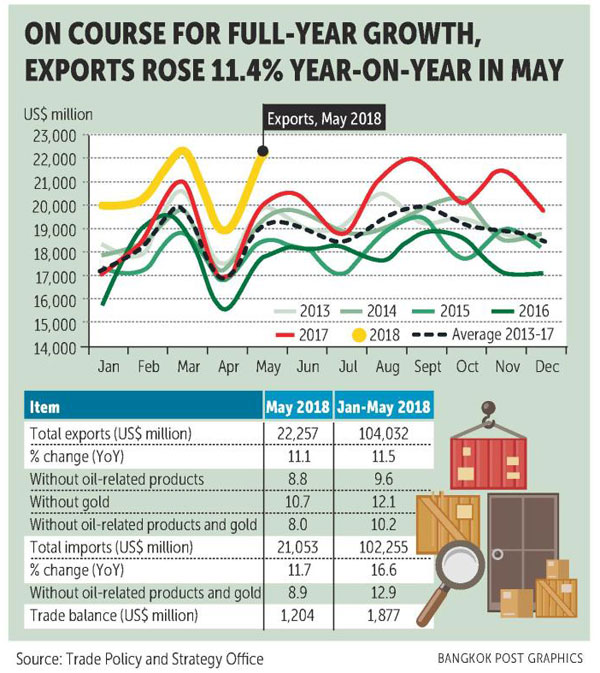