Capital outflows from Thailand's stock market are expected to persist and could reach a five-year high of 200 billion baht this year, mainly due to the US's macroeconomic policies, says Asia Plus Securities (ASP).

With such a bearish projection, the Stock Exchange of Thailand (SET) index could plunge to 1,500 points in the coming period, with the baht depreciating to 34 against the US dollar amid concerns over a global trade war and a faster pace of interest rate normalisation by the US Federal Reserve, said senior executive vice-president Poranee Thongyen.

In the worst-case scenario, if the US imposes up to US$250 billion (8.25 trillion baht) in tariffs on Chinese imports, this would subsequently hit global economic growth, Mrs Poranee said. 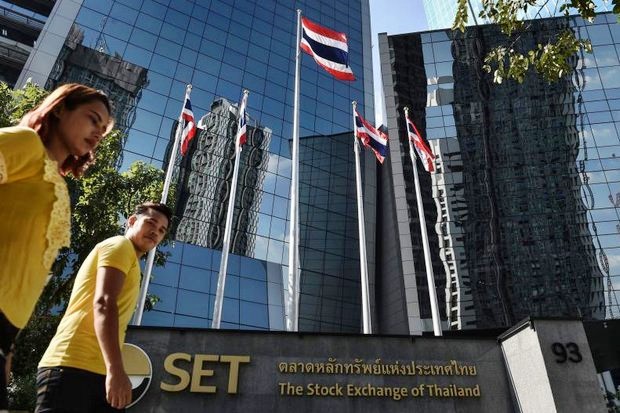 Attractive US interest rates could suck up to 200 billion baht out of the Stock Exchange and sink the baht to 34-per-dollar by the New Year.

SET-listed firms' net profit would also decrease by 20% as a result of the US's protectionist trade measures, she said.

To reduce a massive trade deficit with China and fulfil his campaign pledge, US President Donald Trump has vowed to impose tariffs on $50 billion in Chinese goods, ranging from dishwashers to aircraft tyres. The first tariffs are due to come into effect on July 6.

Foreign fund outflows from the SET in the first six months, meanwhile, were logged at 180 billion baht, coming close to the peak of capital outflows in 2012 registered at 190 billion, ASP said.

Foreign investor holdings of local equities stood at 23.2% in the first six months. At the end of May, foreign investors had put 7% of their money into non-voting depository receipts (NVDRs), a way for foreign investors to invest in and own Thai stocks. Total foreign shareholding was recorded at 30.2%, ASP said.

The portion of NVDRs has risen by about 1% year-to-date, implying that foreign investors have shifted their money from long-term holdings to short-term ones, as NVDR holders have no say in corporate decision-making, Mrs Poranee said.

Foreign investors have been selling local equities over the past five years and could remain net sellers this year if the US persists in protectionist measures and further raises its policy rate, she said.

The global trade war will indirectly pressure the baht, with the local currency expected to weaken to 34 baht to the dollar by year-end, Mrs Poranee said. 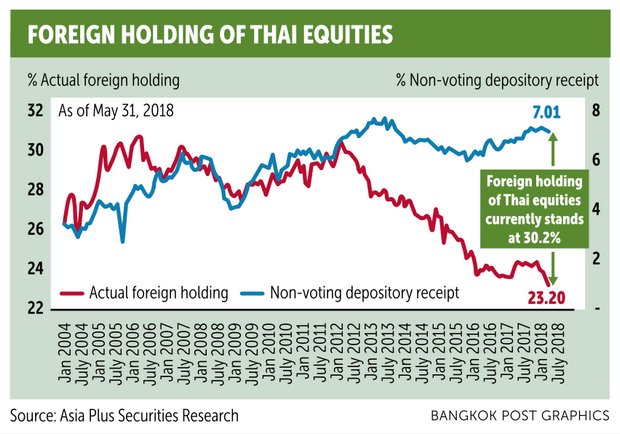 The Bank of Thailand is expected to raise its interest rate by 25 basis points to mitigate substantial fund outflows in the second half and provide a cushion against rising domestic inflationary pressure, she said.

SET-listed firms' net profits in the second quarter are anticipated to ebb from that because of negative external developments, but the oil and petrochemical sectors are projected to gain from rising oil prices, she said.

This year's net profit for SET-listed firms is forecast at 1.1 trillion baht, up 13% year-on-year, with earnings per share projected at 110.7 baht, ASP said. The SET index is projected at 1,771 points by year-end.

ASP recommends that investors put 40% of their money in stocks, focusing on the domestic banking and construction sectors, which are poised to benefit from the government's infrastructure megaprojects.

Despite the intensifying global trade war and the Fed's interest rate hike, these two issues are expected to end well, said Mayuree Chowikran, head of research at Yuanta Securities.

Market participants have already absorbed several rounds of negative sentiment, while there is a possibility that both the US and China will come to an agreement on trade to prevent adverse effects to the global economy, Ms Mayuree said.

On the domestic front, Thailand's economic growth trajectory remains strong and domestic politics has stabilised, with a general election expected to take place in February 2019, she said, adding that the baht's value is likely to appreciate once trade tensions ease.