As a result of the healthy auto market, Japan's Mitsubishi plans to increase its market share beyond its current target of 8%. It is monitoring the market this month before changing its target.

He said this optimism is based on expiry of the five-year ownership period for the first-time car buyer scheme of the previous government, which should stimulate more replacement purchases. 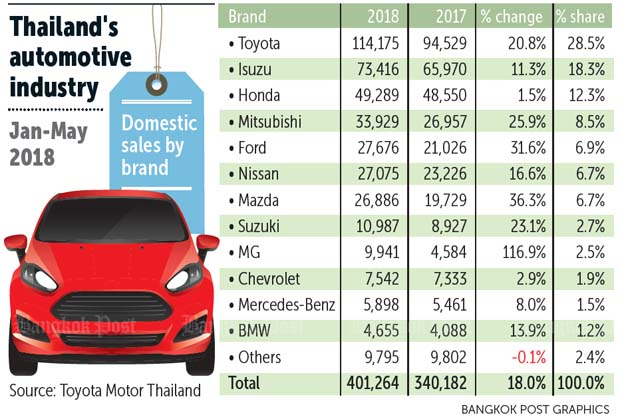 The Thai economy is also driving the auto market, in particular the government's accelerated infrastructure projects and the Eastern Economic Corridor Act, which should attract new investment, said Mr Chokki.

"These factors have an effect on the car market. The country's GDP growth this year is expected to be 4.2%, up from 3% in previous estimates," he said.

"The market has been excited since early this year because of many new and refreshed models from distributors, which should keep sentiment bullish over the remainder of this year."

Toshiaki Maekawa, president of Tri Petch Isuzu Sales, the local distributor of Isuzu trucks, said the company has increased its overall market projection to 950,000 cars sold in 2018. But he said the off-season market in the third quarter will pressure sales growth.

"Isuzu is monitoring interest rate trends, capital flows and currency exchange in light of the US-China trade war, all of which are negative for Thailand," he said.

Mr Maekawa said external circumstances caused Isuzu to maintain its Thai market share outlook at 18% in 2018. He said although its pickup sales have done well, Isuzu's large bus and truck sales remained in the red this year.