Japanese and Chinese investors are seeking opportunities in the local residential market. By Surachet Kongcheep

The number of new foreign property developers entering Thailand from different countries has been increasing every year. Before the regional economic crisis in 1997, developers from countries such as Japan, Taiwan and Singapore mostly invested in the country's industrial estates, especially in the Eastern Seaboard provinces.

However, the residential estate sector in Thailand really started to take off 10 years later after the country recovered from the 1997-98 crisis, as an improving economy and growing middle class stoked housing demand in Bangkok. The first wave of foreign residential developers came from Singapore, China and Taiwan, but only a few survived in the long term.

The second wave of foreign developers started from 2012 onward, with investors from Japan leading the way. Among them were two big Japanese names that formed joint ventures with SET-listed companies: Mitsui Fudosan with Ananda Development Plc, and Mitsubishi Estate with AP Thailand Plc.

These Japanese developers support their Thai partners with expertise in various aspects of the business such as technology, building design or product development, while leaving the Thai partner to run the overall project development process and company management. 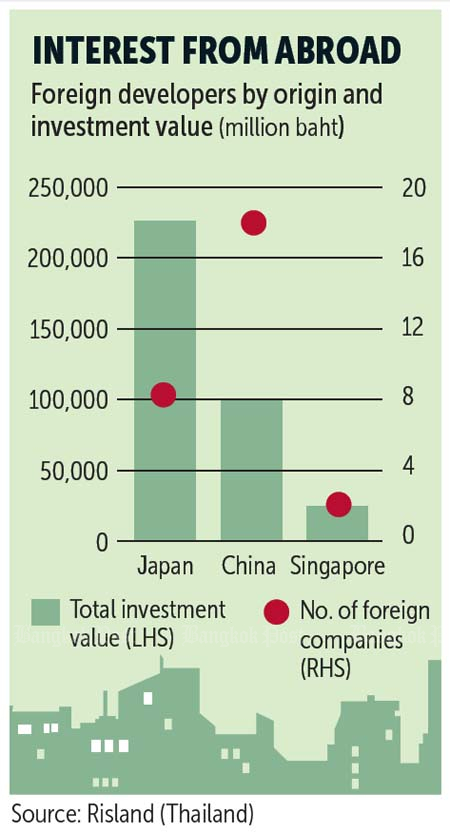 Developers from China, Singapore and Taiwan are also forming new joint ventures with Thai developers. Many Chinese developers have entered the Thai market during the past two years. Although the Chinese government strictly controls real estate investment outside of China, Chinese developers and buyers are still looking to invest in Thailand as they feel confident in the economy of the country in the long term.

Chinese developers take a different approach from their Japanese counterparts, as they prefer to lead the management process of the joint venture. This is because in most cases a lot of the units in projects developed by these ventures are being marketed to Chinese nationals as investment properties or second homes.

Even though the economy of Thailand has not grown as strongly as those of some other countries in Southeast Asia, it still offers good market potential. Its status as the region's leading tourist destination, with more than 32 million foreign visitors last year, including more than 10 million Chinese, is a key attraction.

The fact that foreigners can own condominium units in their name up to a limit of 49% of the total saleable area of a project is another positive factor attracting investors and developers. The EEC Act BE 2561 (2018), passed recently to spur development of the government's highly touted Eastern Economic Corridor, will allow foreigners or foreign developers to own land plots in their names. Foreigners also can own up to 100% of condominium units in projects in specific areas of the EEC.

However, the most interesting location for foreign developers is still Bangkok. It is the most familiar location for foreigners, and the public transport system is a plus. Like their Thai counterparts, foreign developers are drawn to high-potential sites along the BTS and MRT lines and main roads such as Sukhumvit, Ratchadaphisek, Silom, Sathon and Rama IX, which many foreigners are already familiar with.

Most foreign developers who have invested in the country will focus more on condominiums, where they can market the foreign quota of a development to their own nationals to generate more revenue.

Surachet Kongcheep is a veteran local property market expert. He can be reached at surachet.jock@gmail.com