Thailand's direct and indirect losses because of the US-China trade war won't be noticed too much this year because of export growth but K-Research says there is greater risk next year.

Thailand is forecast to lose more than it gains from the trade spat between the US and China, with a net negative effect on exports of US$280-420 million for the rest of this year, reaching $4.5 billion (149 billion baht) if the retaliatory trade measures continue past 2018, says Kasikorn Research Center (K-Research).

The research house believes that the trade war could extend into the next 2-4 years, shaving 0.3-0.5 percentage points off China's economic growth in 2018 if that scenario takes hold, said assistant managing director Siwat Luangsomboon. The effects on Thai exports will therefore be larger, as China is Thailand's major export destination.

"If the trade war is prolonged, the direct impact on Thai exports would be $1.76 billion, and indirect impacts through supply chains would amount to $2.8 billion next year," Mr Siwat said. 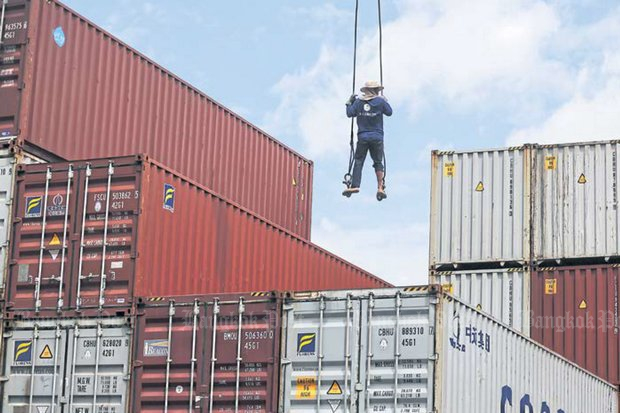 Thailand's direct and indirect losses because of the US-China trade war won't be noticed too much this year because of export growth but K-Research says there is greater risk next year.

The impact is forecast to be limited this year because the estimated net effect is not significant when compared with robust export growth for the first five months, he said.

Thailand's outbound shipments rose by 11.6%, the highest rate in seven years, to $104.03 billion during the five months to May.

K-Research has revised up its 2018 export growth forecast to 8.8% from 4.5%, with the global economic recovery seen as the main engine driving Thai export growth.

The research centre estimates that Thai manufacturers will be both winners and losers from the deepening trade spat.

Hard disk drives, plastic integrated circuits, auto parts, value-added plastic, upstream plastic and refined petroleum are expected to take advantage of the US-China trade dispute, while textiles and some steel products will be winners from the trade rift between the US and the EU.

But solar cell panels, washing machines, steel and aluminium will see a direct impact, with electronics and electric appliances in China's supply chain expected to be hit indirectly.

After solid growth in the first quarter, K-Research increased its full-year GDP growth forecast for 2018 to 4.5% from a previous projection of 4%.

The research centre also raised its forecast for every economic indicator with the exception of private investment, said research head Nattaporn Triratanasirikul.

K-Research upgraded its 2018 domestic consumption forecast to 3.5% from 3% after farm income grew for a third straight month in June at 7.9%.

For the first half, farm income rose by 2.4% year-on-year, with further growth projected in the next half. 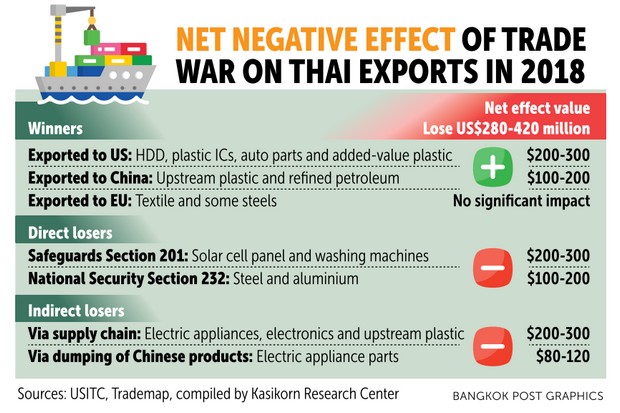 Despite a fall in farm product prices, the contraction is expected at a slower pace of 0.4% in June, compared with 9.3% in April and 4.9% in May.

"Improving farm income is expected to gain further traction in the second half because of seasonal factors, while the country's economic growth will be more broadly-based," Ms Nattaporn said.

Ms Nattaporn forecasts the country's GDP growth in the second quarter to exceed 4%.

Separately, the Stock Exchange of Thailand (SET) index yesterday plunged during the last 15 minutes of the session amid rising concerns over heavy fund outflows and the baht's depreciation.

For today's trading view, the stock market is expected to remain highly volatile as market sentiment hinges on economic policies carried out by developed economies, notably the US and the EU, he said.

Most Southeast Asian stock markets fell yesterday, in line with worries that mounting Sino-US trade tensions are hurting global economic growth, according to a Reuters report.

Indonesian shares slumped 2.1% to their lowest close since mid-May 2017, extending their decline into a third session and making them the region's top losers, Reuters said.