Government efforts have satisfied global human rights criteria, but the path to legitimacy is complicated

Migrant labourers on a fishing boat docked at a pier in Phangnga province. PATIPAT JANTHONG

Beaten down by back-breaking labour and deprived of their liberty, weary migrant workers are closer to emancipation from sea slavery with the government's increased efforts to prosecute and convict human traffickers.

While some might call it a knee-jerk reaction, the military-led government has increased law enforcement efforts to improve Thailand's tarnished image as a human trafficking destination following reports in 2014 on rampant illegal fishing and reliance on trafficked workers from neighbouring countries such as Myanmar and Cambodia. 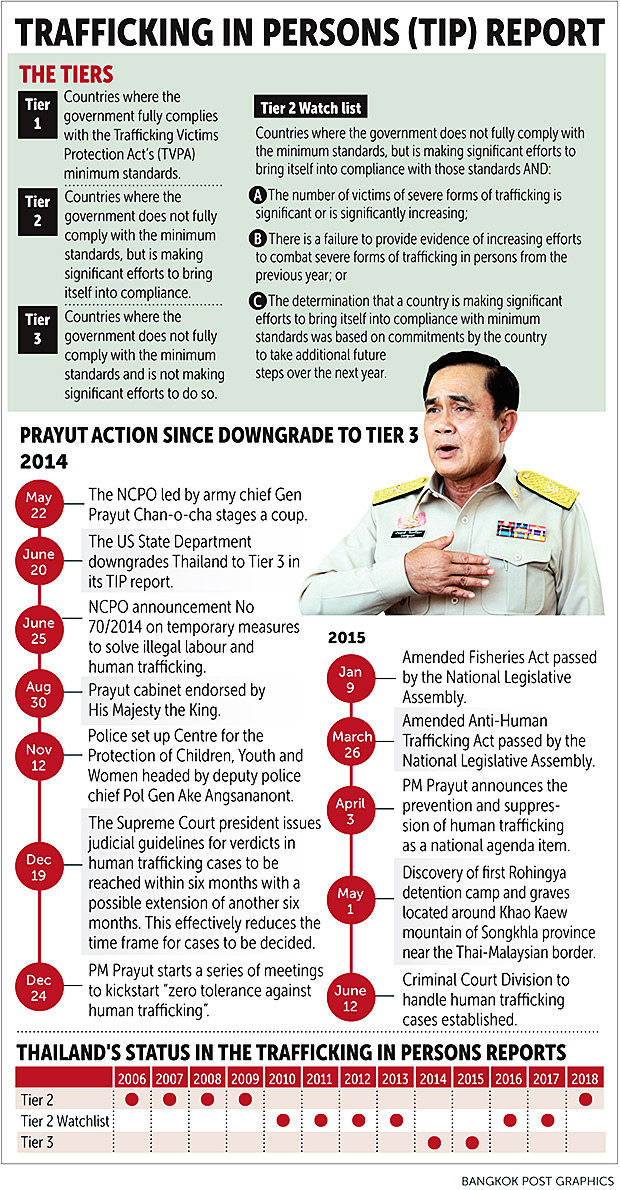 Threatened by the EU in 2015 with a ban on all Thai seafood exports unless the issue was resolved, the public and private sectors jointly rushed to undertake efforts to combat human trafficking in a bid to safeguard the lucrative fishing industry from losing staggering profits.

Such efforts have resulted in Thailand being promoted from a tier 2 watch list to tier 2 in the US State Department's Trafficking in Persons (TIPs) 2018 report.

The annual report evaluates 187 countries and territories and ranks them into four tiers, with tier 1 being the best and tier 3 the worst.

"The government has implemented the correct approach [in dealing with human trafficking] and it is a positive sign that Thailand's standards are internationally recognised," said Labour Minister Pol Gen Adul Sangsingkeo.

"Thailand has a system to manage the inflow of foreign labourers, with an integrated information system, legitimate work permit process, and the availability of protection and aid."

Some of the measures undertaken by the Labour Ministry include collecting information via an iris scan of 170,000 labourers working in the fishing industry and registering 1 million labourers into the legal system. 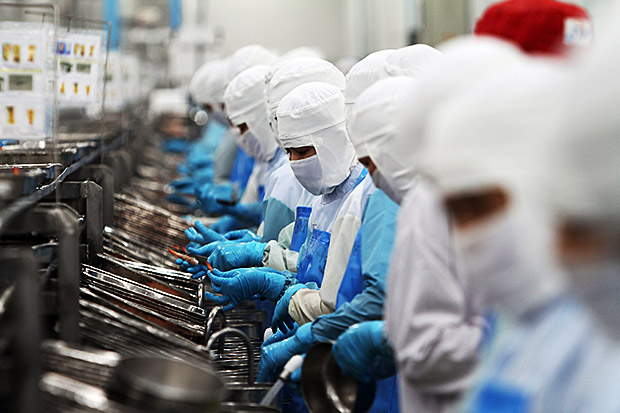 The Labour Ministry started registering migrant labourers last year, with the aim of documenting and regulating 1.32 million people, the vast majority of whom came from Cambodia, Laos, and Myanmar. The process, however, has been plagued with problems and delays.

Only 840,736 labourers were registered in May, causing the deadline to be pushed back a month.

Since then over 333,000 people have scrambled to register at the ministry's one-stop service centres, with half of them coming from Myanmar.

There are 14,298 people, mostly from neighbouring countries, suspected to still be working in Thailand illegally.

Poj Aramwattananont, president of the Thai Fishery Producers Coalition and vice-chairman of the Thai Chamber of Commerce, said the US's TIPs upgrade will help amend the country's human trafficking image.

But the upgrade has done very little in terms of boosting Thailand's trade value in the global market, he said, noting that Thailand still managed to export fishery products as usual during the past few years despite being placed on the tier 2 watch list.

"The TIPs upgrade will definitely help restore the image of Thai products and US consumer confidence," said Mr Poj. "Even though we have been given an upgrade, we still have to continue to tackle human trafficking problems to upgrade our ranking to tier 1."

Thailand was upgraded from tier 3, the lowest ranking, to the tier 2 watch list in the TIPs report released in June 2016. Tier 2 indicates the Thai government made significant efforts to eliminate trafficking during the rating period but it still did not fully meet the minimum standards to eradicate trafficking.

Despite the improvements, being placed on the tier 2 watch list underscores that human trafficking remains a major problem in Thailand and requires additional, substantial, and effective government leadership.

Thai seafood exports were valued at US$3 billion (99.6 billion baht) in 2017, up from $2.84 billion logged a year earlier, said the Thai Frozen Foods Association.

Aat Pisanwanich, director of the Center for International Trade Studies at the University of the Thai Chamber of Commerce, said the upgrade indicates Thailand's successful efforts in addressing human trafficking problems. 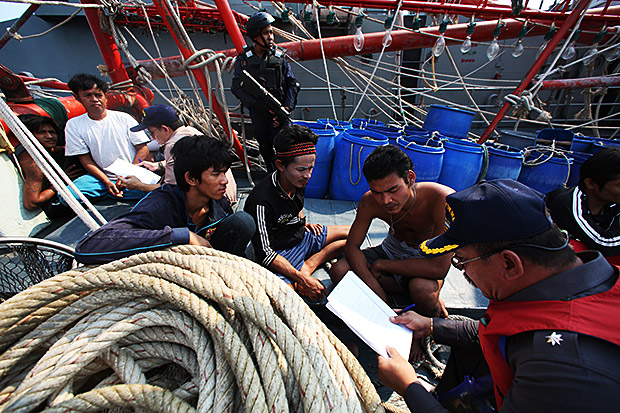 "The country's overall image will surely improve on the global stage, which is good for Thai shipments, particularly in developed countries such as the US, the EU, and Japan," said Mr Aat.

Key products that are expected to benefit from the US's TIPs upgrade are those in labour-intensive categories, including fishery products, rubber products, garments and textiles, as well as farm and agricultural processing products.

Thailand's tourism sector is also expected to reap gains as foreign tourists will be encouraged by the country's efforts to refrain from exploiting foreign workers, he said.

More importantly, free trade agreement (FTA) talks in the future will become much easier, given improved confidence in Thailand.

But the ongoing efforts to tackle human trafficking may result in a possible labour shortage for Thailand, especially in labour-intensive industries such as fishing, he said.

Mr Aat urges the government to speed up the process for registering migrant workers.

Not an easy task

Yongyuth Chalamwong, research director for labour development at the Thailand Development Research Institute, said the upgrade is good news, but maintaining the tier 2 rank is not an easy task as Thailand has to uphold the assessment criteria on a constant basis.

"Possible sanctions imposed on Thailand for its human rights record and child labour are not expected to materialise [because of the TIPs upgrade], but the upgrade does not empower the country to negotiate tariff barriers with the US as the US considers bilateral trade deficits [rather than human trafficking problems]," said Mr Yongyuth.

Thailand's image is anticipated to improve in the euro zone, which bodes well for food and fishery exports to that region, he said.

An upgrade to tier 1 status will take time as the government is only an interim administration, said Mr Yongyuth.

Still, credit has to be given to the incumbent government as it has been working to regulate the fishing industry and eliminate human trafficking, he said.

Apart from creating a standardised labour registration system, efforts have to be made on the legal front, with offenders punished accordingly and witnesses well-protected, said Ms Nattaya.

According to the 2017 executive decree on the management of migrant workers, legal action will be pursued against both employers and unregistered staff in the event of any visa-related transgressions.

Labourers will face a fine of 5,000-50,000 baht. They will also be repatriated and banned from working in Thailand for two years.

Repeat offenders will be liable for fines of 50,000-200,000 baht per worker, a jail term of up to one year, and a three-year ban on hiring foreigners.

As a major company previously accused of having relations with suppliers involved with human trafficking, SET-listed Thai Union Group Plc has since cut ties with supplies associated with forced labour and has launched programmes to improve transparency in the fishing industry.

With the support of Thailand's Fisheries Department, Thai Union has launched an innovative digital traceability pilot programme that has the potential to improve transparency throughout Thai waters as well as the greater fishing industry as many issues in Thailand are replicated in fishing communities worldwide, said Darian McBain, Thai Union's group director for sustainable development.

"The company is investing in innovative digital traceability projects to boost human rights and workers' say in the fishing industry. We have also worked with Nestle and the Southeast Asian Fisheries Development Center to develop a demonstration boat to promote labour rights in the Thai fishing industry," said Ms McBain.

When asked whether Thailand's TIPs upgrade would affect the overall sales of Thai Union's products, she said it would not be appropriate to speculate, but the upgrade is certainly a step in the right direction.

Chanintr Chalisarapong, president of the Thai Tuna Industry Association, said the upgrade is good news for the country.

"The TIPs upgrade will better reflect on Thailand's image and the fishing industry in the future," said Mr Chanintr.

News surfaced a few years ago about how the country used slave labour on fishing vessels and was designated as a transit point for traffickers from nearby nations.

Thailand was downgraded to tier 3, the lowest ranking, in 2014-15, a position reserved for nations whose governments do not fully comply with minimum human trafficking abatement efforts. Following government efforts to combat human trafficking, the country was placed under the tier 2 watch list in 2016-17.

Mr Chanintr said the business sector is grateful Thailand has been upgraded to tier 2 because that ranking exceeds that of its neighbours.

Malaysia is on the tier 2 watch list, while Laos has a tier 3 position.

The business sector believes Thailand can reach tier 1 in the future because the government has been working hard to meet the US State Department's standards, he said.

The government has also investigated more cases of suspected officials complicit with trafficking crimes and has issued regulations to increase the oversight of non-government organisation (NGO) shelters, said Mr Chanintr.

The government provides access to public financial support, including increased training for labour inspectors about forced labour, and it established an anti-trafficking task force including social workers and NGOs, he said.

An upgrade in the TIPs report is a boon for Thailand's seafood industry, with the country one of the leading global seafood exporters, particularly in canned tuna and shrimp.

"The business sector believes seafood exports have a better image in the public eye and customers in overseas market have greater confidence in our seafood products. The EU and the US will be less likely to associate Thai seafood products with illegal fishing and human trafficking," said Mr Chanintr.

Suphan Mongkolsuthree, chairman of the Federation of Thai Industries, said exports will benefit from the recent TIPs upgrade because it will enhance the image of quality and product operations to be on a global standard.

"This will boost customer confidence when ordering and buying Thai products because they will not relate them to illegal fishing and human trafficking," said Mr Suphan.