The most up-to-date figures from the Marine Department put the number of ships in Phuket at 501, but observers say the number is much higher. PATTARAPONG CHATPATTARASILL

Thailand is known for its high death toll from road accidents, ranking second in the world for road deaths after Libya in 2016, according to the World Health Organization. But fatalities at sea have been rising, with human errors and irresponsible behaviour resulting in more accidents over the past several years.

Most of these deaths at sea are tourists, and as losses mount it dents the country's booming tourism, a key cog in Thailand's economy.

The latest calamity saw a tourist boat sink off Phuket with 47 deaths -- all Chinese tourists -- which is certain to erode tourist confidence over safety standards here.

Some people also criticised poor management by park authorities after 12 boys and their football coach were trapped inside a cave in Chiang Rai, which took several days and hundreds of volunteers and resources to rescue safely.

The Tourism and Sports Ministry said the sea disaster in Phuket forced it to reinforce key commitments it signed with private agencies five years ago.

Pongpanu Svetarundra, permanent secretary for tourism and sports, said a memorandum of understanding (MoU) was signed five years ago with the aim of increasing collaboration on safety and security management between government organisations and business operators.

They agreed to seek efficient preventive measures to protect the industry and work to rebuild the sector if it is disrupted.

However, implementation was not effective and now government agencies in the agreement decided to more effort is needed to make it work, he said.

"These organisations are being given more power to regulate or solve problems. They can work as a team or independently, depending on each situation," Mr Pongpanu said.

"For example, to prevent possible damage from travel operators, the DSI can inspect any suspected operators and ask to see their operating licences or other documents. If their documents are not in order, they will face legal action."

Amlo and the Revenue Department can require tour operators to declare financial reports and any income sources. The Tourism Department, which grants licences to travel companies, can closely monitor businesses and revoke licences if legal violations are found, he said.

These are stricter efforts than were undertaken in the past, while inspections and law enforcement is handled by local police and authorities.

Mr Pongpanu also instructed tourism companies to watch each other and provide information on those suspected of breaching the law so that authorities might investigate.

He said a renewed effort to enforce this MoU by the group of agencies will help crack down on illegal tour companies and take non-registered operators out of the market, improving safety and raising tourist confidence.

Mr Pongpanu's hope is the work will prevent any more disasters like the boat capsizing in Phuket.

Phuket has become a popular tourist destination, receiving about 10 million visitors last year and generating some 385 billion baht in income, nearly 14% of the 2.77 trillion baht the country received from the industry in 2017.

Most of the tourists in Phuket are foreign, with Chinese comprising the largest chunk.

He said the ministry plans to discuss with China-based app developers such as Alibaba, WeChat and Baidu development of new communication channels for Chinese visitors if they receive any misleading information or get cheated by travel agencies.

The ministry wants to provide real-time travel information, including advisories for Chinese tourists while they travel in Thailand.

It also vows to improve the quality of staff working at all attractions across the nation, said Mr Pongpanu.

Weerasak Kowsurat, the tourism and sports minister, said the government would prioritise four principles to drive the tourism industry forward and called for all stakeholders to join the effort.

The four principles are no compromises on safety, reducing inequality and disparity, sustainability, and generosity and kindness.

He said the events in Chiang Rai and Phuket might not affect the country's tourism much if Thailand can manage them properly and learn from them.

The minister said some 1,000 industry members are expected to attend the annual Tourism Authority of Thailand Action Plan briefing in 2019, which is a good time to put in place a new role for marketing communications.

"I think this is an opportunity for the entire industry to adopt new standards. We can learn from it and raise our safety standards," Mr Weerasak said.

Although nobody wants tourist accidents to occur, there must be safety and management procedures in place when they do, he said. Prime Minister Prayut Chan-o-cha ordered the ministry to upgrade tourist safety and security standards nationwide, said Mr Weerasak.

Ittirit Kinglake, president of the Tourism Council of Thailand, said now is a good time to upgrade safety for the entire country.

He said tourists visiting dangerous areas such as caves, mountain cliffs, and seas as well as those doing adventure activities must follow advice given by trained personnel.

Most importantly, each attraction must have well-trained staff on duty during all operating times in case tourists need assistance.

Once tourists enter the country, they must be protected and be made to feel safe, said Mr Ittirit. If they have a problem, they should receive assistance as soon as possible.

There were several major boat accidents the past two years reported at beach resorts, including Pattaya and Phuket, with 33 dead and 63 injured.

The accidents prompted the Tourism and Sports Ministry and the Marine Department to enforce marine safety measures at popular beaches.

Guidance and regulations for operators and tourists have been issued, such as prohibiting drug and alcohol use for all boat operators before and after journeys, a speed limit and mandatory GPS devices for any boats carrying more than 12 passengers.

Last year the Andaman Medical Hub was opened at a cost of 100 million baht on the Andaman coast. The centre covers three provinces -- Phuket, Phangnga and Krabi -- and was established to provide tourist medical assistance before and after incidents.

There are tourist assistant centres located at Surin beach in Phuket, Koh Similan in Phangnga, and a navy base in Khao Lak in Phangnga. Khao Lak Hospital is the main base for medical facilities.

The Andaman coast has become a more popular destination for international and local tourists, with the traveller crush causing more accidents, especially for Chinese tourists.

Anan Wongbenjarat, director-general of the Tourism Department, said another preventive safety measure is to offer online licensing specifically for travel companies. This is the first time the department offered such e-licensing procedures for the private sector, he said.

E-licensing helps travel operators save on time and costs while it allows the department to keep track of businesses.

For new entrepreneurs, they can register with the department around the clock. Once registration is approved, they will be certified and recommended to tourists.

The department believes certified travel operators will offer clients better service standards. If there is an incident, operators can provide the client's information and travel itinerary to the government.

"Certified travel companies using this official platform can be trusted. Tourists will not have to worry about scamming and inappropriate behaviour," said Mr Anan. 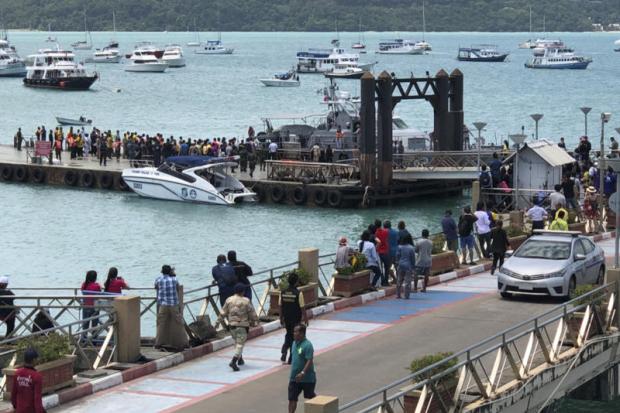 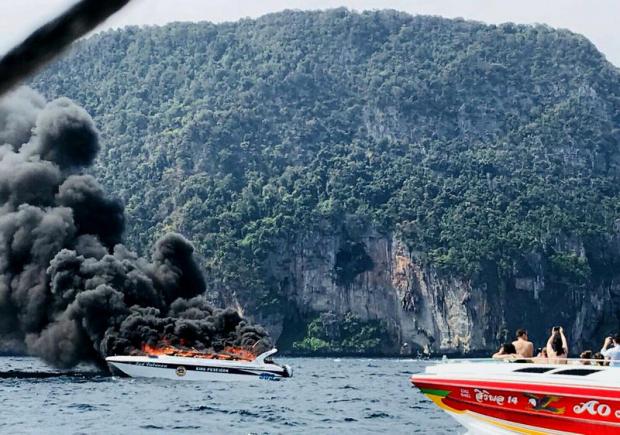 Black smoke billows from a speedboat after a blast caused by an oil leak near Koh Phi Phi Le in Krabi province, injuring 16 Thais and Chinese. Krabi Disaster Prevention and Mitigation Office 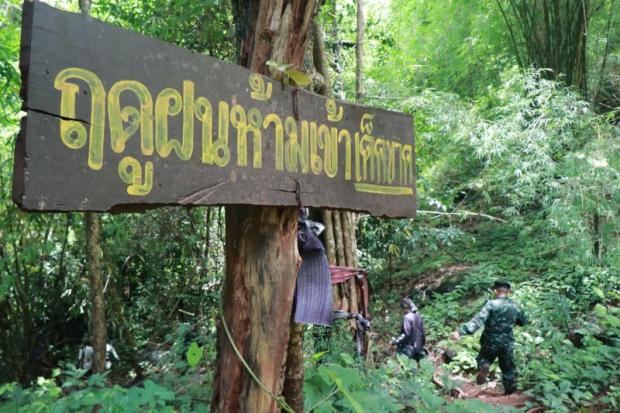 A sign prohibiting visitors from cave visits during the rainy season is seen at Thung Salaeng Luang park in Phitsanulok.