Most of the 11 SET-listed banks managed to deliver a higher net profit in the second quarter, though the waiver of online transaction fees dealt a blow to fee and service income. 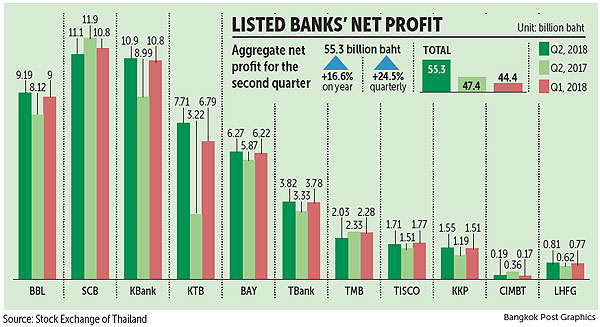 The 11 banks' cumulative net profit for the April-to-June quarter was 55.3 billion baht, up 16.6% from a year earlier and 24.5% from the previous quarter.

Among the four largest banks, Siam Commercial Bank (SCB) was the only one that saw net profit drop in the second quarter. The bank's unaudited consolidated net profit fell by 6.7% year-on-year and 0.9% quarter-to-quarter to 11.1 billion baht.

The investment in new technology platforms as part of the bank's transformation programme and digital acquisition activities, which led to a rise in operating expenses, was also blamed for the lower net profit.

SCB in late March made a surprise push into digital banking by eliminating transaction fees over digital channels for cross-area and interbank fund transfers, bill payment, top-ups and cardless money withdrawals. That move compelled other banks to follow suit.

Krungthai Bank (KTB) was the best performer among its listed bank peers. The bank delivered a 139% year-on-year jump in its second-quarter net profit to 7.71 billion baht, according to KTB's filing with the Stock Exchange of Thailand.

On a quarterly basis, the bank's net profit increased 13.6%.

KTB's sharp decline of 51.2% year-on-year in its loan-loss reserves was attributed to high earnings. The bank's impairment charges totalled 6.77 billion baht, compared with 13.9 billion a year earlier. But its bad-loan coverage ratio increased to 123.5% at the end of June from 121.7% at the end of last year.

KTB's net fee and service income rose by 1.3% on the same period last year but fell 5.3% from the preceding quarter to 5.84 billion baht.

"Fee income declined from the previous quarter because of the scrapped fees for cross-clearing zones and interbank money transfers, bill payments and top-ups through KTB netbank, as well as the drop in lending-related fees," the bank said.

The bank's consolidated non-performing loans amounted to 111 billion baht at the end of June, up 7.3% from the end of 2017.

Kasikornbank's (KBank's) second-quarter net profit rose 21.5% year-on-year and 1.4% quarter-to-quarter to 10.9 billion baht, thanks to an increase in both net interest and non-interest income.

High income from the bank's securities agent activities, dividend and bancassurance business countered the decline in net fee and service income resulting from the waiving of digital transaction fees and a drop in mutual fund and brokerage fees, helping the bank's non-interest income rise, KBank said in a filing with the SET.

The bank's lower impairment charges also gave a boost to its bottom line. KBank set aside 8 billion baht in loan-loss provisions in the second quarter, compared with 10.6 billion over the same period of last year.

CIMB Thai Bank was the worst performer among its banking peers for the period. The bank's net profit tumbled 46.5% year-on-year to 191 million baht, largely because of a rise in impairment charges.