Rising prices for land near future mass transit lines and in neighbouring provinces drove the average land price in Greater Bangkok to a 32.3% year-on-year increase in the second quarter of 2018. 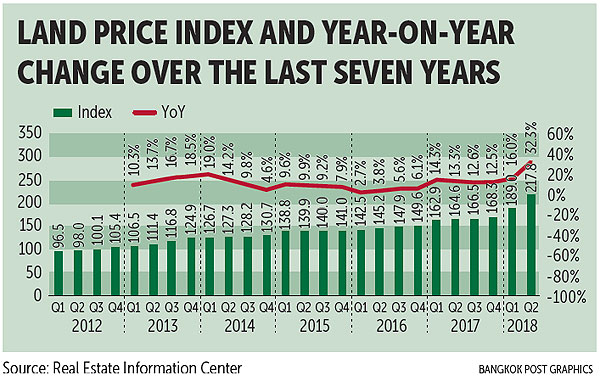 The Real Estate Information Center (REIC) on Friday reported the top five locations where prices of undeveloped land rose the most in the second quarter compared with the same period last year.

They were led by the Phra Khanong-Bang Na-Suan Luang-Prawet area, where prices were up 53%, followed by Nakhon Pathom with a rise of 39.1%.

In third was Ratburana-Bang Khun Tien-Thung Khru-Bang Bon-Jom Thong with a rise of 38.2%, and Samut Sakhon came in fourth with an increase of 27.4%.

Among locations where mass transit lines currently operate or are planned for construction, locations along the skytrain's Sukhumvit Line saw the highest increase in land prices at 26.8%.

Close behind were prices for land near the Orange Line from Thailand Cultural Center to Min Buri (up 23.5%), the Dark Red Line from Hua Lamphong to Maha Chai (up 21.4%), the Blue Line route of Bang Sue-Tha Phra-Hua Lamphong-Bang Kae (up 21.3%) and the skytrain's Silom Line (up 21.2%).

The REIC also did an analysis of changes in price for undeveloped land by categorising by city zone, which designates land use. The centre found that the highest year-on-year increase in land prices was in high-density residential areas (up 56.1%).

That was followed by land in industrial areas, where prices rose 29.8%. Land in community residential areas or in Pathum Thani, Nakhon Pathom and Samut Sakhon saw a rise of 19.7% in land prices.