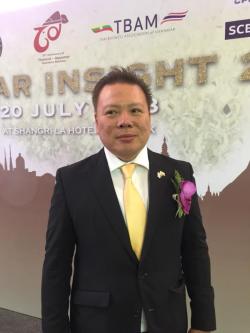 Myanmar's ambition to promote marine tourism along the virgin beaches of the Bay of Bengal has attracted Thai tourism operators.

Association president Surasak Keeratichokechaikul said that once the new FDI law comes into force at the start of next month, doing business and making investments in Myanmar will be easier and more practical.

Myanmar's new FDI law will let any foreign investor increase its stake in companies registered in Myanmar to 35%, a marked standardisation compared with existing regulations that have so far varied on a case-by-case basis.

Foreign investors will also be allowed to rent land for many years, up from only one year and a maximum renewal contract of one year, Mr Surasak said.

He declined to provide an exact figure for the number of rental years the new law will allow foreign investors.

The association was formed by a group of Thai businessmen who live and work in Myanmar.

Mr Surasak said foreign investors in Myanmar include Thais interested in expanding businesses in Yangon and other major tourist destinations in a bid to cash in on tourism growth.

"Thai companies involved in retail, hotels, airlines and medical treatment, as well as consumer products, have contacted the association, asking for legal support and incentives being offered by the Myanmar government," Mr Surasak said.

Some Thai companies involved in coffee shops, food and restaurants have already entered Myanmar via business partnerships or under a bilateral agreement.

Thailand ranks third for FDI in Myanmar in terms of investment value, trailing China and Singapore.

U Ohn Maung, Myanmar's tourism minister, said Thai investors have shown interest in investing in the tourism business in Yangon and other tourist venues, particularly along the Bay of Bengal, which runs to southern Thailand and is suited for marine tourism.

Myanmar has beautiful beaches and unspoiled coral reefs, especially when compared with those in Thailand. These should attract investors that specialise in marine tourism, diving and environment- and community-based tourism, U Ohn Maung said.

The Myanmar government is considering developing a new marine route linking beaches with Phuket and other attractions along the Andaman coast.

Supalak Foong, managing director of Prime Residence, which owns Rosewood Yangon Hotel, said the $140-million property is scheduled to open in 2019 to serve both international and local guests.

Ms Supalak said investing in Myanmar is much easier after the FDI rules were revised. But she advised Thai investors to contact local authorities directly to obtain investment privileges.