JOHANNESBURG: Leaders of the BRICS emerging economies -- Brazil, Russia, India, China and South Africa -- will meet in Johannesburg this week, with the threat of a worsening global trade war topping the agenda. 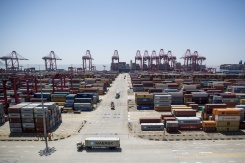 Trade wars with the United States are likely to top discussions at the three-day summit meeting of the BRICS emerging economies -- Brazil, Russia, India, China and South Africa -- that kicks off on Wednesday.

US President Donald Trump's hardening stance has compounded fears of an all-out trade war after he slapped levies on goods from China worth tens of billions of dollars as well as tariffs on steel and aluminium from the EU, Canada and Mexico.

Earlier this month, China said that it would step up cooperation with other developing nations like the BRICS grouping to counter "trade protectionism".

China on Monday rejected accusations by Trump that it was manipulating the yuan to give its exporters an edge, saying Washington appeared "bent on provoking a trade war".

Trump has said he is ready to impose tariffs on all $500 billion of China imports, complaining that China's trade surplus with the US is due to unfair currency manipulation.

"As to the US being bent on provoking a trade war, China does not want a trade war but is not afraid," China's foreign ministry spokesman said when asked about Trump's threat to impose the across-the-board tariffs on Chinese goods.

Russian Economy Minister Maxim Oreshkin said last week ahead of the Johannesburg meeting that "this summit is about the context -- we are at a time when the US and China announce new measures almost every week".

He said much of the discussions with China would likely focus on what is happening with the United States.

"This is a trade war, so leaders' discussions are particularly important in coordinating our positions," said Oreshkin.

Sreeram Chaulia, of the Jindal School of International Affairs outside Delhi, said BRICS leaders would "concur that the US has unleashed punitive trade wars that are hurting all the BRICS members".

"They have a collective interest in promoting intra-BRICS trade. The urgency this time is greater," he said.

The BRICS group, comprising more than 40 percent of the global population, represents some of the biggest emerging economies, but has struggled to find a unified voice -- as well as achieving sharply different growth rates.

Analysts say US trade policy could give the group some renewed momentum.

"Trade agreements between associations of countries like BRICS have become increasingly important given the self-seeking, and ultimately short-sighted, barriers to trade that are being instigated by the US," Kenneth Creamer, an economist at Johannesburg's Wits University, told AFP.

"South Africa, and Africa more broadly, can benefit from increasing exports to fast growing countries like India and China. BRICS has the strategic potential to re-shape world trade."

The trade war risk also dominated a meeting of Group of 20 finance ministers and central bankers at the weekend in Buenos Aires, while International Monetary Fund chief Christine Lagarde again spoke out against the tit-for-tat tariffs.

China's President Xi was due to hold bilateral talks with South African Cyril Ramaphosa on Tuesday after visiting Senegal and Rwanda as part of a whistlestop tour to cement relations with African allies.

Signalling diplomatic rivalry over influence in Africa, India's Narendra Modi is visiting Rwanda and Uganda on his own five-day tour of the continent including the BRICS summit.

Turkish leader Recep Tayyip Erdogan will also attend a summit as the current chair of the Organisation of Islamic Cooperation (OIC). Erdogan will reportedly meet Putin on the summit's sidelines.

European Commission chief Jean-Claude Juncker travels to Washington on Wednesday to meet Trump as part of the EU's effort to head off a trade war.