Just a day after the collapse of the Laos dam held 25% by Ratchaburi Electricity Generating Holding Plc, Tris Rating reaffirmed its rating of Ratch as AAA. (Photo via ratch.co.th)

Analysts are at odds about whether the collapse of a hydropower dam in southeastern Laos will take a toll on earnings at Ratchaburi Electricity Generating Holding Plc (Ratch), as the company holds a 25% stake in the Xe-Pian Xe-Namnoy Hydroelectric Power Project.

The project is about 90% complete and is scheduled to begin operations in 2019.

The collapse of Saddle Dam D of the Xe-Pian Xe-Namnoy project claimed at least 19 lives and left more than 3,000 people in need of rescue.

"The incident was caused by a continuous rainstorm which caused a high volume of water to flow into the project's reservoir," Ratchaburi Electricity said in an English-language statement.

In the worst-case scenario, Ratch will see 1.4% of its total electricity production capacity of 7,000 megawatts affected, since the project's electricity generation stands at 102.5MW, according to Asia Plus Securities (ASP).

The hydropower dam project is under construction and insured, and insurance compensation is expected after the damage is assessed accordingly, ASP said.

Substantial damage to the dam is not anticipated, but compensation for damage to affected locals and the environment could mean the company has to shoulder extra costs, the securities firm said.

Since the project has yet to be handed over because it remains under construction, it is unclear about the degree of responsibility that PNPC has to shoulder, which is a risk for Ratch because the company is among the major shareholders, ASP said.

Despite how the company has insisted that the incident will not affect commencement of electricity generation in February 2019, the disaster is a negative factor for Ratch because it could cause the company's expected cash flow to shrink, said Arpaporn Sawangpak, head of research at DBS Securities Thailand. 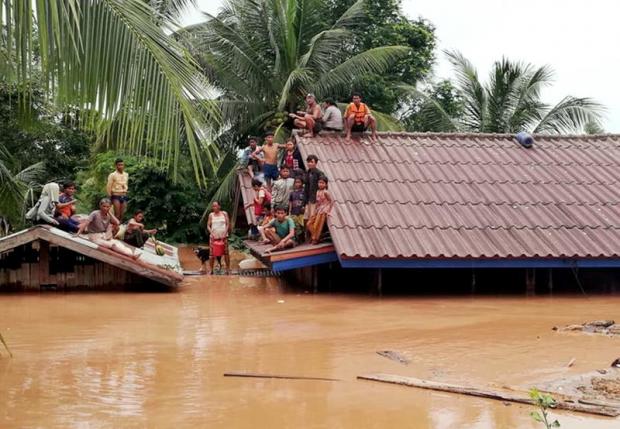 Lao villagers are stranded on rooftops after the collapse of the Xe-Pian Xe-Namnoy dam. (EPA photo)

Based on a consensus of the Investment Analysts Association, analysts expect Ratch's net profit in 2018 to decline compared with last year's net profit of 6.1 billion baht, while yield on dividend payment is expected at 4.5% this year.

ASL Securities, however, offers a different take, saying the incident is unlikely to have much impact on Ratch's operating results because it is a short-term negative and company executives have reiterated their commitment to project implementation in line with the initial time frame.

RATCH shares closed Wednesday on the Stock Exchange of Thailand at 51.50 baht, up 25 satang, in trade worth 296.2 million baht.