The cashless society is on show at this retail shop in Norway.

Cashless transactions are the new norm in global payments, with mobile phone apps and credit cards forming the nucleus of cutting-edge payment methods.

The Nordic nations have become the benchmark for the cashless society, with some countries very close to becoming cash-free. The trend has been developing gradually across Asia as governments, banks and startups rush to keep up with ever-changing technology.

With sophisticated new technologies boosting the prospects of a fully cashless society, GH Bank will roll out its own mobile app and other digital services this quarter, said chief executive Chatchai Sirilai.

The app will be created by GH Bank itself, with features facilitating monthly payments, loan applications, and digital deposits and withdrawals.

"The bank also will offer QR payment service in order to meet the ambition for a cashless society from this month onwards," Mr Chatchai said. "The service is part of the company's shift from cash-based operations to digital services."

GH Bank expects customers to use the GH Bank All app for up to 50% of total transactions carried out each month. The bank logs an average of 700,000 transactions a month, with mortgage payments taking up the largest portion.

It is also hoped that such a move will reduce heavy traffic at service branches, especially for monthly instalment payments, Mr Chatchai said.

Loan growth this year is forecast at 6%, he said.

At the end of June, the bank issued new mortgage loans worth 105 billion baht in total, up 53.7% year-on-year. These loans covered 85,263 new accounts, of which 51,482 were opened by lower- and middle-income people receiving mortgage loans for homes valued below 2 million baht.

The bank's new mortgage loans are targeted at 189 billion baht by year-end.

In hindsight, the key reason why the seed of a cashless society has yielded a good harvest in Nordic countries, especially Sweden and Norway, is the fact that cash itself is the fuel behind every nation's grey economy.

An antidote to the problem is to go cashless, as the Nordics have demonstrated. Essentially, electronic transactions create greater transparency than physical cash because of high traceability. 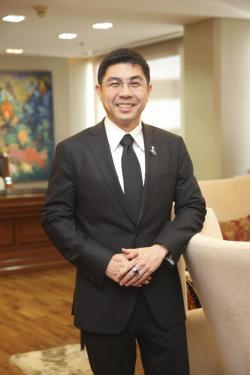 Don't feel like carrying a lot of banknotes? Tired of queuing at foreign exchange booths? Scandinavia is the place for you. As a tourist, you can pay for expenses with the tip of a finger or a credit card swipe everywhere.

There is also no minimum payment. Even if you buy only a dish of food, you can pay for it via a mobile app or credit card.

"Here, everything has changed," said a Thai restaurant owner in Sweden who requested anonymity. "The government does not want to lose time examining where the cash comes from, and it is difficult to clarify through lengthy discussions.

"Before the cashless society manifested, the government constantly changed cash models to avoid money laundering. Finally, the state found that cashless transactions were the answer to the problem. At present, payment through credit cards or mobile apps is available everywhere, and it is easier to check where the money comes from through [traceable] transactions."

Apart from restaurants, regular convenience stores also welcome credit cards and mobile app payments because they are a lot easier, secure and more accurate to use.

In Sweden, cash in circulation dropped to 1.4% in 2016 from 4.4% in 2000, according to Bloomberg. Similarly, cash transactions accounted for less than 3% in Norway, with less than 10% of the number of transactions, including buying coffees, done in cash, according to Jon Nicolaisen, deputy governor of Norges Bank.

As one of the leading proponents of a cashless society, Norway recently announced that the country was close to becoming cash-free.

Founded in 2010, Auka has built and operated a reliable, licensed end-to-end payment infrastructure that connects financial institutions, merchants and consumers through cloud technology, with 17 banks and several thousand merchants using the payment platform in Norway.

"We have set our sights on the global stage," said founder and chief executive Daniel Doderlein. "The world has become one of digital economies, and fintech technology will become more vital day by day."

Mr Doderlein was among the first individuals to develop mobile payment technology in Scandinavia, and he was the first to launch a mobile payment service in Norway (mCash). He was also a pioneer in creating and running a regulated financial services platform on public cloud technology.

After Norway's second-largest bank, SpareBank 1, acquired mCash for exclusive use in Norway, Mr Doderlein started his own company, Auka.

He said Auka helps banks anywhere in the world create, launch and monetise their own mobile payments, following the successful formula of banks in Scandinavia.

Auka was named as Deloitte's Fastest Growing Fintech in Europe, the Middle East and Africa, along with endowing the best mobile payment platform, by CFI Magazine.

Mr Doderlein said more than 100 banks over the world have applied for Auka's platform services, except those in Asia. In Europe and nearby continents, there is still plenty of room for growth, he said.

The company has yet to start penetrating the Asian market, though it is interested, Mr Doderlein said.

"In my view, cash use will decrease by 20% over the next two years," he said. "Fintech will take over some [payment] services and replace bank payment services and other services from now on. Moreover, Facebook has got a banking licence for financial institutions that will be effective in the next two years. This will have a significant impact for banking operations worldwide, otherwise banks would not have prepared fintech to handle an imminent major disruption."

Bank branches in Scandinavia have declined sharply in number over the past several years because of lower cash usage.

As a result, some people might find it difficult to locate bank branches or ATMs for money deposit or withdrawal. For foreign currency exchange, tourists are able to exchange money at foreign exchange booths located in airports.

Another factor discouraging people from over-the-counter services is the fact that fees charged for walk-in services at bank branches are quite expensive in Nordic countries.

"Bank branches will continue closing and digital payment will be fully adopted in the next several years," Mr Doderlein said.

HOUSTON: A Bengal tiger last seen a week ago roaming the lawns of suburban Houston and terrifying locals has been found unharmed and was moved Sunday to an animal sanctuary, police said.

Netflix Movies Turn Up in a Surprising Place: Theaters