A Pandora outlet in a Bangkok mall. The Denmark-based company has announced major cutbacks, including more than 200 Thai jobs. (Photo via FB/pandora.th)

COPENHAGEN/BANGKOK: Shares in Danish jewellery maker Pandora plunged by a fifth to their lowest level in more than four years on Tuesday after the company issued a profit warning and announced plans to cut almost 400 jobs.

Thailand, where Pandora has both jewellery-finishing shops and a chain of commercial stores, will take the heaviest jobs hit.

The announcement was a shock in Thailand. All the company's jewellery is produced in Thai shops, mostly at the Gemopolis Industrial Estate in Prawet district in eastern Bangkok.

According to one of the company's websites, Pandora has been manufacturing its jewellery in Thailand since 1989 when Per Enevoldsen, Pandora's founder and a goldsmith by trade, set up the foundation for the company's crafting facilities in Bangkok.

Last January, Nils Helander, Senior Vice President, Manufacturing, and Managing Director at Pandora Production Thailand (above) promised the company would invest another 2.62 billion baht in Thailand. He said Pandora was committed to expanding its retail business - but now has begun slashing more than 200 Thai jobs.

Pandora, known for its charm bracelets, lowered its sales and profit margin guidance for this year late on Monday, saying both had fallen in the second quarter.

The world's largest jeweller by production volume, Pandora earlier this year warned of thinner margins due to slowing mall traffic in the United States and British markets, a lack of new products, and lower prices in China.

"Another profit warning just a few months after the updated mid-term targets may put the credibility of the current strategy and management team in question," Berenberg analysts said in a note. 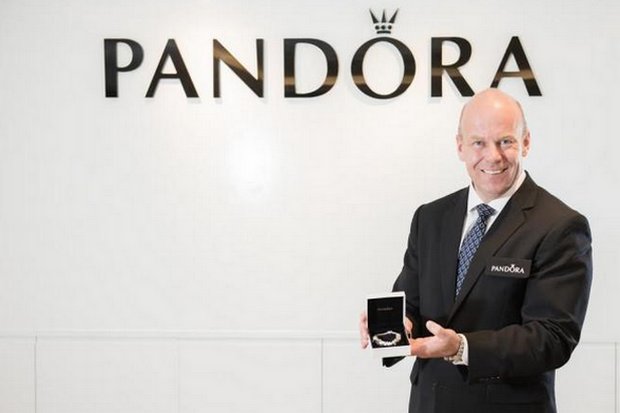 Pandora owns nearly 2,600 stores worldwide, but sales have slipped in its more than 600 stores in Britain and the United States as consumers there increasingly turn to online shopping, prompting hedge funds to increase short positions in the company.

The company said on Monday it would add around 250 concept stores this year, rather than the 200 it had planned.

The weaker retail environment has also been due to a shift by younger consumers away from jewellery and towards spending on technology and experiences.

China has with its growing middle class been a key growth market for affordable luxury jewellery makers like Pandora. But last month the Danish company said it was forced to lower retail prices in China by an average 15% to combat a rise in grey market sales.

The company had already in May warned of a slowdown on the Chinese market, which accounted for 12% of the company's total sales in the first quarter.

Founded in Copenhagen in 1982, Pandora saw strong growth in the years after its listing in 2010 with shares rising almost 20-fold in the four years to 2016, topping 1,000 Danish crowns in May that year.

They have since shed almost two-thirds of their value, helped by some U.S. hedge fund taking large short positions in the stock.

"The management holds full responsibility for not preparing the organization for a situation where it is no longer steering a speed boat, but rather a container vessel," said Per Hansen, economist at investment firm Nordnet.

"I think it requires a change of the management to restore investors' trust," he said.

The company said on Tuesday that it will cut 397 of its 27,000 employees to streamline operations and to protect profitability. More than half of the job losses will be in Thailand.

Pandora, which is due to publish its full second quarter results on Thursday, expects sales in local currencies to increase by between 4 and 7% this year, compared with the 7-10% it previously projected.

It also cut its forecast margin on earnings before interest, tax, depreciation and amortisation (EBITDA) for the year to around 32% from 35%.