Media spending on TV during the upcoming Asian Games 2018 broadcast is expected at 80-90 million baht, a 25% decrease from the last games in 2014. 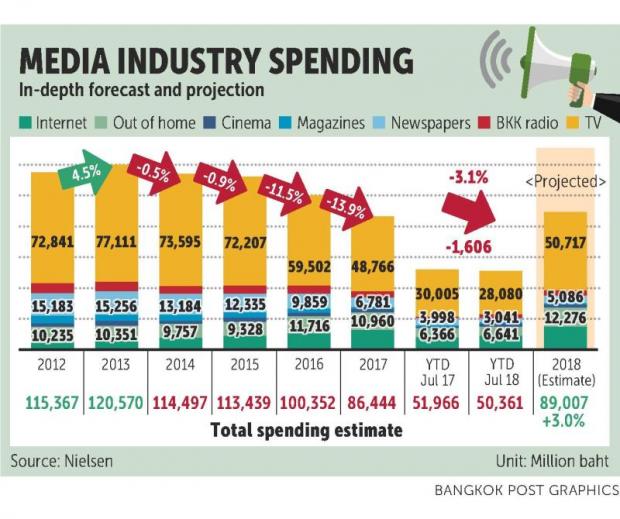 Media Intelligence Co (MI) director Pawat Ruangdejworachai said the two-week multi-sport event normally drives Thailand's media spending, on TV in particular, to more than 100 million baht, but the broadcast this time will be reserved for only two digital TV channels.

In 2014, the Incheon Games were able to generate some 116 million baht for TV business in only two weeks because there were many ads circulating many TV channels.

This year the Asian Games is expected to generate 90 million baht at a maximum, a 25% decrease from 2014. With only two licensed broadcasters, brands and advertisers have a smaller captive audience, so they won't spend as much, he said.

MI forecasts that total ad expenditures in all media outlets this year will reach 89 billion baht, a 3% increase over the same period of last year.

The ad expenditures of all media including digital and analogue TV, internet, out-of-home, cinema, magazine, newspaper, radio and satellite TV in July stood at 50.36 billion baht, according to MI's in-depth forecast and projection.

The biggest drop in ad spending in July was experienced by the magazine sector, which fell 37%, followed by newspaper, which saw a drop of 24% and cable & satellite TV, which dropped 23%.

The most successful medium was digital TV, where ad spending shot up 43%, followed by internet and online (+16%), and cinema media (+12%).

Internet and online media is estimated to grow more than 30-40% to reach 14.8 billion baht thanks to compatibility and convenience, which have drawn that brands and advertisers budgets.