According to an analyst from Kasikorn Securities (KS), major operators continue to see service revenue growth, especially Advanced Info Service (AIS) and True Move, however, their return on invested capital (ROIC) has declined significantly since 2015.

ROIC is the percentage return that a company makes over its invested capital.

Thai telecom operators have been faced with heavy financial burden from infrastructure expansion investment, including high licence payments that lowered their ROIC, said the analyst.

Each major mobile operator spent 100 billion baht on average for the past three years for network expansion investment, to be competitive and retain customer base.

AIS and True Move each won the 1800 and 900-megahetz licence auction in 2015, giving each company licence costs of more than 100 billion baht for the combined winning prices of the 1800MHz and 900MHz licence. 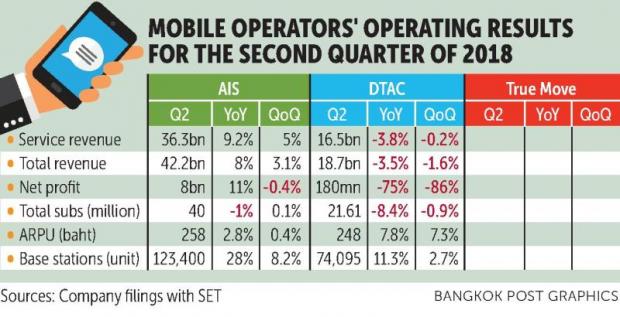 Total Access Communication (DTAC) failed to win any licences in 2015. Without a new licence, DTAC's mobile concession under CAT Telecom will expire in September, and its ROIC has been declining due to lower profit-making capability.

The analyst said the slow increase in ROIC for the operators will persist for the next two years, and will improved after 2020, when 5G is launched commercially worldwide.

The analyst said the spectrum auction for 5G licences will likely not create high costs for telcos as 5G adoption will mainly focus on industrial use cases rather than serving the mass market, allowing operators to invest less than they had in 4G.

Suphachai Chearavanont, executive chairman of True Move, accepts that the low ROIC for telecom operators will inevitably constrain downstream innovation adoption and affect the country's competitiveness in the long term.

The government and the regulator could ease these burdens by not setting reserve prices that are too burdensome in the 5G spectrum auction, he said.

He said it's too early to scale infrastructure investment after 2020 because several critical factors for 5G remain unclear.

"Although 5G will not serve the mass market, operators may have to invest much more in devices," he said.

The analyst said the service revenue for major operators is abundant compared with other industrial sectors, but telecommunications requires intensive investment, with each player putting in almost 100 billion baht over the past three years.

AIS's service revenue in the second quarter increased by 9.2% year-on-year and 5% from the first quarter.

The analyst from KS said the huge decrease in DTAC's profit was mainly from depreciation accounting for the 2G mobile concession on the 1800MHz and 850MHz spectrum under CAT Telecom.

"After this year, DTAC's profit will soar following the concession expiry in the third quarter," the analyst said.

True Move booked service revenue at 18.3 billion for the second quarter, up 9.6% year-on-year and 2.3% from the first quarter.