Thailand's corruption situation improved in the first half of the year, thanks in part to the government taking serious action with respect to the temple funds embezzlement scandal and irregularities in an embezzlement-hit welfare fund intended to help poor students.

According to the biannual survey by the University of the Thai Chamber of Commerce (UTCC), the corruption situation index (CSI) climbed 55 points for the period until June, up from 52 points in last December's survey. 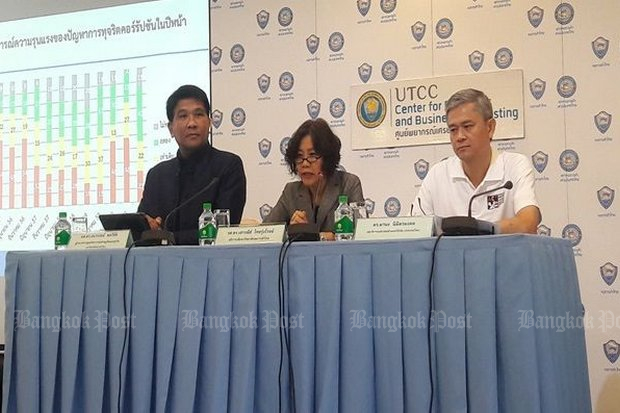 The University of the Thai Chamber of Commerce believes there is a little less corruption at the moment, and next year there will be a lot less. (Post Today photo)

A lower CSI score indicates higher levels of corruption, while a score of 100 shows high transparency and a lack of graft.

"The country's corruption situation has improved, partially due to higher awareness and intolerance of corruption among Thais," said UTCC president Sauwanee Thairungroj, adding that the key causes of corruption are delays or complexities in state working procedures, poor law enforcement and legal loopholes.

The corruption is mostly in the form of bribes, under-the-table payments paid to state officials and politicians, policy corruption and power abuse by politicians to favour their partisans.

UTCC vice-president Thanavath Phonvichai said the latest survey also found that the percentage of kickbacks has fallen from as much as 25-35%.

"Based on the preliminary information we've gathered, kickback payments still persist, but the rates have fallen to 20-25% at most," Mr Thanavath said. "This is considered a good sign after the government has seriously tackled the country's corruption and under-the-table payments."

According to Mr Thanavath, the survey found that people have greater confidence in the efficacy of the National Anti-Corruption Commission (NACC) and other independent organisations, as well as business and media organisations, in tackling corruption.

Mana Nimitmongkol, secretary-general of the Anti-Corruption Organisation of Thailand, attributed the improvements to the concerted effort of all parties in dealing with the problem. 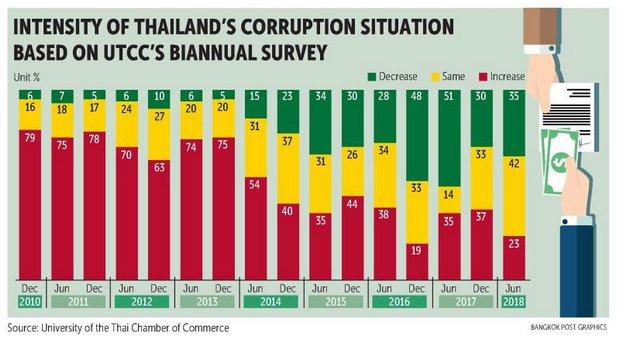 The new version of the anti-corruption law was published in the Royal Gazette on July 20. This version includes a provision that empowers the NACC to commence an investigation, file a case and deliver a ruling against judges of the Constitutional Court, officers of any independent organisations and holders of political office, as well as state officials.

The new law also makes it clear that the statute of limitations in criminal proceedings of any defendants who have escaped will be suspended while they remain absent.

In addition, holders of all offices and their spouses must file reports of their assets and liabilities to the NACC, while state officials, as well as employees of state enterprises and their spouses, have to file the same report with their superiors.

Vichai Assarasakorn, vice-chairman of the Thai Chamber of Commerce, said Thailand's overall corruption is expected to improve after government initiatives that invite representatives from the private sector and third parties to be members of committees that handle state procurements.

In the past, no representatives from the private sector were allowed in such procurement committees.

So far, representatives of the private sector have participated in supervising the procurement of 70 state projects worth 800 billion baht combined, reducing state spending by an average of 25%, Mr Vichai said.