The Excise Department is confident that 90% of motorcycles sold in the country will see minimal impact from the new excise tax structure, which shifts the calculation basis from engine size to CO2 emissions.

The new structure will be in line with the recalibrated car excise tax, which was previously based on engine size and went into effect in 2016.

A source familiar with the matter told the Bangkok Post that the new tax structure on motorcycles has yet to be finalised because the department must get cabinet approval.

The tentative structure begins with a 1% excise tax on motorcycles that release less than 10 grammes of CO2 per kilometre. Most are mass-market motorcycles.

The maximum excise rate of 18% will be imposed on motorcycles that emit over 130 g/km, which are mostly big bikes with engines more powerful than 1,000cc.

"Most locally made motorcycles have an average CO2 emission of less than 50 g/km," the source said. "While 90% of motorcycles have engines sized below 150cc and are subject to the tax of 2.5%, once the department implements the new structure, the 150cc excise rate will be close to the existing rate." 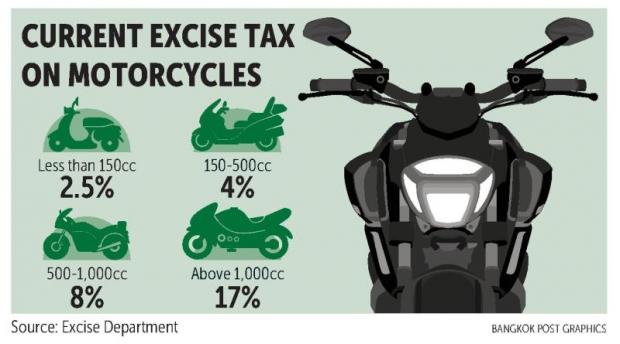 The new excise tax for motorcycles is set to comply with the government's policy to calculate tax based on eco-friendliness.

After the tax rate is announced, motorcycle makers and distributors will have a one-year grace period to prepare themselves for the new structure.

In the past, carmakers and distributors were allowed a three-year grace period.

Earlier, Excise Department director-general Krisada Chinavicharana said the new excise tax on motorcycles would not result in higher prices, as the tax will result in a mere 0.05% increase in retail price.