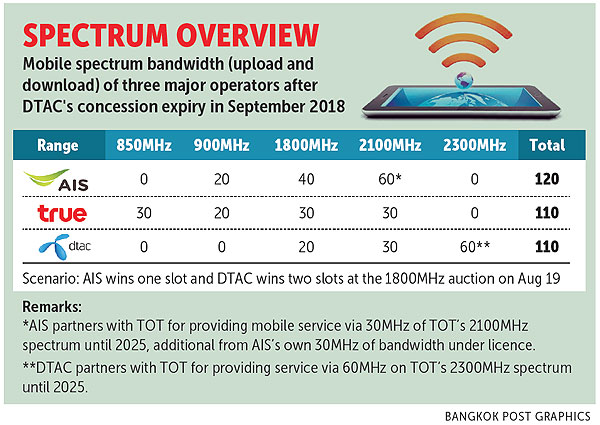 AIS wants to enhance bandwidth capacity to strengthen its market leadership, having already won 30MHz at the 1800MHz auction in 2015.

DTAC will be satisfied with bidding for two block licences, each containing 10MHz for upload and download.

AIS and DTAC are the only two bidders at tomorrow's 1800MHz auction, while second-largest provider True Move decided to sit out the auction.

An industry veteran said a combined 40MHz of bandwidth for upload and download under a sole spectrum range is enough for an operator to optimise its bandwidth capacity.

Following the expiry of DTAC's concession on the 1800- and 850MHz ranges in September, AIS will hold the most mobile bandwidth on a variety of spectra.

DTAC may not need to spend much money to win a licence, the reserve prices of which will be based on the winning price of the 2015 auction.

The telecom regulator had planned to auction 1800MHz blocks in the first round, but no major operators expressed intentions to participate and the auction was aborted.

The first-round auction for the 1800MHz spectrum was divided into three licences, each with 30MHz of bandwidth with a reserve price of 37.4 billion.

DTAC urged the regulator to offer smaller licences, such as 10MHz of bandwidth for each block rather than the 30MHz.

The telecom regulator responded by amending the auction conditions and dividing the 1800MHz range into nine licence blocks. Each 10MHz block has a reserve price of 12.48 billion baht.

The source said DTAC is most likely to bid for only two blocks or total 20MHz on the 1800MHz spectrum, worth 25 billion.

The second-round auction is expected to generate a combined 37.5 billion baht for the regulator from three blocks.

The source said that after the 1800MHz auction healthier competition should manifest in the telecom market, due to fairer competition with more balanced spectrum holdings among mobile operators.

AIS will lead with most spectrum bandwidth at total 120MHz of bandwidth for upload and download.

Dividing into revenue market share between the three operators, AIS held 47.2% in June, followed by True Move at 27.8% and DTAC at 25.1%.