Chinese tourists visit the Temple of the Emerald Buddha, one of their favourite destinations in Bangkok. (Photo by Patipat Janthong)

Thailand and Japan have swapped their top positions as the countries Chinese travellers felt comfortable visiting in the latest survey by Hotels.com.

The survey released on Monday even showed Thailand had dropped in the top 10 destinations visited by the Chinese in the last 12 months.

The kingdom was second behind Japan when the Chinese were asked about countries they felt most welcomed this year. Last year, Thailand topped the category, with Japan coming second.

"Widespread acceptance of Chinese mobile wallets, sufficient translations/signage and ease of information" were the factors that kept Thailand in the second place, the booking website said.

Thailand was down five notches from the third rank in 2017 this year on the destinations Chinese visited in the past 12 months, according to the survey, which showed Japan underlined its position as their top destination during the period, sending Hong Kong from the first to second place. 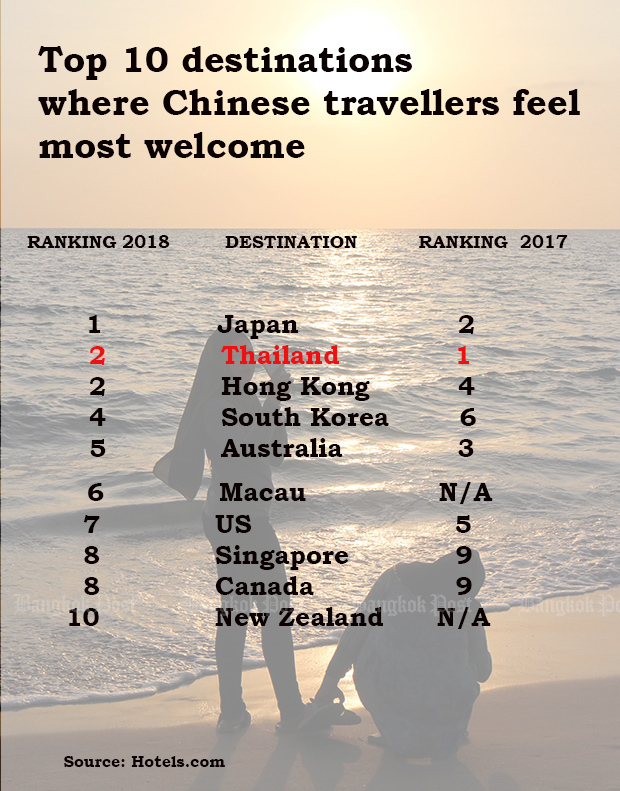 Hotels.com in May interviewed 3,047 Chinese aged 15-58 who travelled overseas in the past 12 months for this year's survey. About half of the respondents lived in big cities such as Beijing and Shanghai, one third resided in provincial capitals and the rest stayed in smaller cities.

The survey was conducted before the Phoenix dive boat tragedy off Phuket island on July 5. The incident killed 47 tourists from China returning from a diving trip in rough seas and bad weather in the Andaman Sea.

Chinese tourists cancelled some 7,300 rooms at Phuket hotels since the fatal boat collapse, according to hoteliers in the resort island. As many as 600,000 called off trips to Thailand last month, the Tourism and Sports Ministry has said.

In an attempt to woo visitors from China, immigration authorities have assigned special lanes at Suvarnabhumi, Don Mueang, Chiang Mai, Phuket and Hat Yai airports for them.

Tourists from China topped foreigners visiting the country. About 6 million came to Thailand in the first half of this year. The ministry was confident that the target for 11 million Chinese would be within reach this year, despite the deaths at sea in Phuket.