Exports grew for a 17th straight month in July, elevating their performance in the first seven months to a seven-year high.

The Commerce Ministry reported Wednesday that customs-cleared exports rose 8.3% year-on-year in July, fetching US$20.2 billion (662 billion baht), after growing 8.2% in June and 11.4% in May.

Exports in baht terms rose by 4.1% compared with the same month of last year, to 662.17 billion baht. 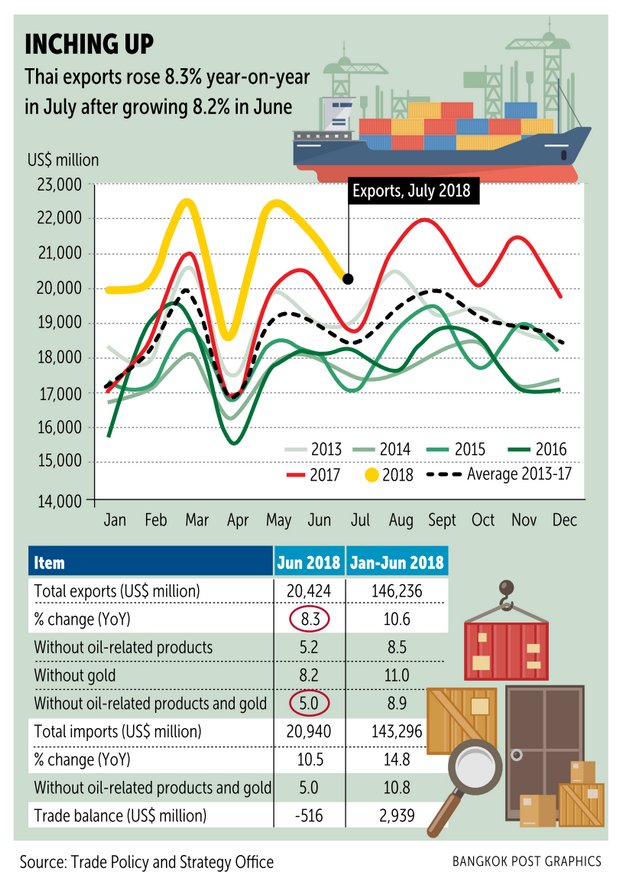 Shipments to most markets except the Middle East and the US saw expansion, with extraordinary growth seen in Asean, India, South Asia, Russia and the Commonwealth of Independent States (CIS) and Japan, which reported double-digit increases.

"Thai exports have done quite well in almost all markets, despite a drop in shipments to the US and the Middle East," said Sureeporn Sahawat, deputy director-general of the Trade Policy and Strategy Office under the Commerce Ministry.

The shipments to the US dropped for the first time in 21 months to $2.25 billion led by televisions and parts and canned and processed seafood, while those to the Middle East fell 9.4% to $689 million.

"The Commerce Ministry is still upbeat that overall export growth will live up to the 8% growth target, although performance is likely to be lower than in the first half, given last year's relatively big base," Mrs Sureeporn said, citing positive factors such as the world's economic growth and strong economies of key trade partners such as the US, the EU, China, Japan and Asean, plus the weakening baht.

Export goods such as electronics, automobiles and parts, as well as products related to oil such as chemicals and plastics, are expected to fare well in the second half.

But Mrs Sureeporn warned that risk factors in the second half include uncertainties in US trade policy and the fluctuation of financial and capital markets, which affect the foreign exchange rate.

The Commerce Ministry is scheduled to review the export growth target in October.

Visit Limlurcha, vice-chairman of the Thai National Shippers' Council, said Thailand's export growth in the second half is likely to match the first-half performance.

He named trade disputes as the key risk factors that could affect Thai exports.

For instance, the overall shipments of semiconductors (solar cells) and washing machines fell 25.6% and 8.8% year-on-year, respectively, as a result of the fall in the shipments of the two products to the US, which contracted 77.7% and 21.9%, respectively.

The research house expects the tit-for-tat trade tariffs between the US and China would put more pressure on Thai export prospects in the coming months.

Nonetheless, the EIC forecast that Thai export will manage to grow of 8.5% this year, boosted largely by the growing economies of key trade partners, higher oil prices and growing global trade.