Getting 5G up and running by 2020 is a vital project, but recent policies of government, the regulators and the mobile phone companies make it unlikely.

Despite being named as a critical item on the national agenda, adoption of 5G wireless broadband service by 2020 is an uphill task, with both regulators and telecom operators scrambling to introduce the technology.

Three obstacles could cause Thailand to miss the 5G train: the financial burden shouldered by telecom operators, including a combined cost of 270 billion baht for the previous 3G and 4G licences; how much more spectrum bandwidth has to be allocated; and the telecom regulator's authority, as only an acting board now manages the National Broadcasting and Telecommunications Commission (NBTC).

This means a 5G ecosystem could serve the needs of everything on a mobile platform. 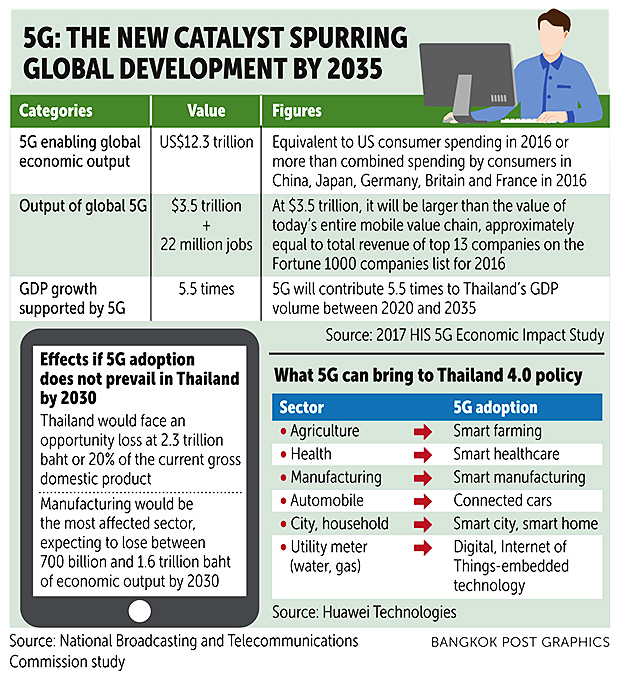 The critical downstream innovations 5G will enable are opportunities for new usage of the Internet of Things (IoT), augmented reality and virtual reality, as well as smart vehicles, remote healthcare and robotics.

4G, which was commercially launched in global markets via mobile apps and high-definition videos in 2010, has changed people's lifestyles, but 5G is expected to have a bigger socioeconomic impact, transforming industries ranging from agriculture and manufacturing to healthcare and utilities.

The government eagerly wants to see 5G adopted as part of its 20-year digital transformation roadmap. A recent NBTC study said that if Thailand fails to adopt the 5G ecosystem by 2030, the country will face an opportunity loss worth 2.3 trillion baht or 20% of its current GDP.

The manufacturing sector will be the most affected, expected to lose opportunities to create value-added features for businesses worth between 700 billion and 1.6 trillion baht.

If operators hesitate to invest or adopt downstream tech innovations because of concerns over return on investment capital (ROIC), the government's plan could be sunk.

The three major mobile operators in the domestic market have shouldered enormous financial burdens from the previous auctions of 3G and 4G licences, worth a combined 270 billion baht.

Another strain is annual investment for network expansion that each operator has made, spending some 100 billion baht for the past three years.

Although the three operators already paid their 3G licence fees to the NBTC, Advanced Info Service Plc (AIS) and True Move have to pay the last term for their 4G licences on the 1800-megahertz spectrum by December, and two terms on the 900MHz spectrum in 2019 and 2020, respectively.

The sum for these two firms to pay the NBTC in 2020 stands at 60 billion baht each. AIS and True Move jointly asked the government late last year to invoke Section 44 to extend the terms of the licence payment due in 2020 by five years, citing the need for state assistance to ease their financial burden, the same argument made by terrestrial digital TV operators.

The NBTC board agreed with AIS and True Move, but there has been no response from the government, with some critics noting that assistance for the two profit-making firms would ease their burden at the state's expense.

An indicator of how onerous the financial burdens on telecom operators have become is the recent auction of 1800MHz licences on Aug 19. This was the second round of the auction after the initial round was aborted because of a lack of bidders.

The second round ended with only two of the nine blocks sold for a combined 25 billion baht. AIS won a licence containing 5x2MHz of bandwidth for upload and download worth 12.5 billion, while Total Access Communication Plc (DTAC) won the other licence.

True Move sat out the auction, saying it had enough spectrum bandwidth to provide services for the next two years.

An analyst at Kasikorn Securities (KS) who requested anonymity said it makes sense for the government to extend the 900MHz licence payment terms for AIS and True Move, as each must pay 60 billion baht in 2020, which is a critical period to prepare for 5G adoption.

Telecom operators have experienced a decline in ROIC since 2016 because of the financial burden stemming from annual infrastructure investment and the cost of spectrum licence payments, the analyst said. Before the end of 2015, AIS had logged ROIC between 30% and 40%, while DTAC's was over 20%. But their ROIC has declined to 15% and 5% respectively.

True Move has booked negative figures in ROIC for years.

ROIC is the percentage a company makes for every percentage point over the cost.

"It would be good if the government and the regulator helped ease [operators' financial] burdens, including a reasonable reserve price for the 5G spectrum auction," Mr Suphachai said.

He said it was too early to estimate infrastructure investments after 2020 because of several unclear factors concerning the 5G ecosystem.

"5G adoption may be different from the 4G ecosystem," Mr Suphachai said. "Although it would serve the mass market, telecom operators may have to invest much more for related devices in a machine-to-machine connectivity era."

Because of 5G's improved speed, latency and connections, mobile operators must hold additional spectrum bandwidth of at least 100MHz (100x2) for upload and download for each service provider.

Takorn Tantasith, secretary-general of the NBTC, said he is seriously concerned about "insufficient spectrum holding" by each operator, which would affect 5G ecosystem adoption. 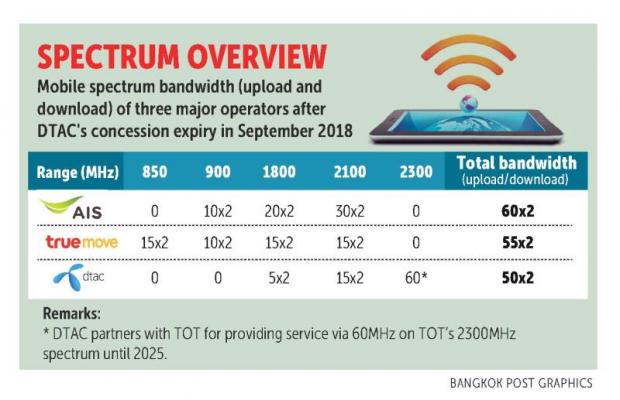 After the most recent spectrum auction, AIS holds the most spectrum bandwidth, with a combined 60x2MHz, followed by True Move at 55x2MHz and DTAC at 50x2MHz.

The NBTC is on the verge of recalling unused or not fully used spectrum ranges from holders to auction them off to serve 5G.

On Aug 15, the NBTC board approved a regulatory draft reforming unused or not fully used spectrum ranges for reallocation. The move is in line with the new NBTC Act from last year allowing compensation for government agencies returning their spectrum to the NBTC before concession expiration for optimum national benefit.

Stated-owned public broadcaster MCOT Plc currently holds 180x2MHz of upload and download bandwidth on the 2600MHz spectrum. MCOT has agreed to return 180MHz of unused bandwidth to the NBTC for the 5G auction.

The regulator also plans to auction 45x2MHz of download and upload bandwidth on the 700MHz spectrum by 2020, spectrum currently used by digital TV channels.

But nobody can guarantee the practicality of the existing plan or the timeline of the next spectrum auction, making 5G adoption uncertain.

Though 5G technology is crucial in driving innovation and developing a local digital transformation through vertical industries, there are at least three critical factors needed for the domestic telecom industry to ensure real public benefits in 5G adoption, said Somkiat Tangkitvanich, president of the Thailand Development Research Institute.

The three factors are real liberalisation of the telecom industry, good regulations and a spectrum allocation roadmap.

Liberalisation, allowing foreign stakeholders to hold more than a 50% stake in a company, will create healthier competition and eliminate chronic problems fostered by state-owned enterprises such as corruption and limited procurement transparency, Mr Somkiat said.

Good policy design and regulations will help eliminate unfair competition among players and reduce high operating costs in some cases, he said.

Earlier, Mr Somkiat disagreed with the idea of providing assistance for AIS and True Move, the two winners of the 900MHz licence auction. He said they did not deserve state assistance because they bid up the prices by themselves.

AIS and True Move also operate mobile services with profit from operations and have the capability to pay the remaining sum of their 900MHz licences due in the next two years, Mr Somkiat said.

The existing NBTC board is working as an acting board after the expiry of its six-year term in October 2017.

The new NBTC Act, which took effect in June 2017, stipulates that the government must conduct a recruitment process for new NBTC board members to replace existing members. The act calls for seven commissioners, responsible for governing both telecom and broadcasting businesses, overseeing spectrum auctions and managing satellite spectrum.

The Office of the National Legislative Assembly (NLA) started recruiting candidates for the board earlier this year, with 86 applicants thus far. But the NLA turned down all 14 candidates in a semifinal round this year, stating that none of them qualified.

After that, the government invoked Section 44, ordering the existing NBTC board to continue its work and responsibilities until changes are made.

If the existing NBTC board's authority is challenged by external parties, including whether it can conduct auctions for a series of spectrum ranges for 5G, it could delay adoption.

In all likelihood, the existing plan and timeline for 5G spectrum auctions and allocation will miss the target if the existing NBTC board is removed, especially if there is a change in government.

A total of 196 out of 300 workers tested for Covid-19 at a construction camp on Chaeng Wattana Road were found to be infected, according to a government MP for Bangkok.